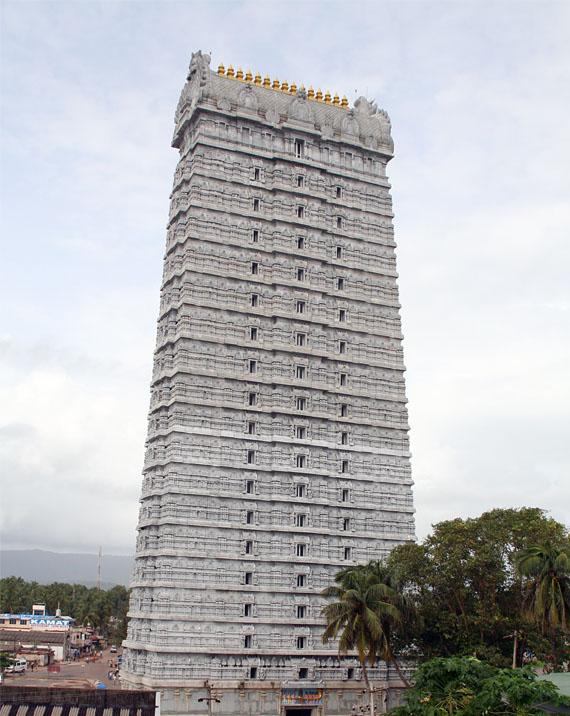 #1 of 20 Places to Visit in Murudeshwar

At a distance of 2 km from Murudeshwar Railway Station, Murudeshwar Temple is an ancient Hindu temple situated at Murudeshwar, Karnataka. It is one of the popular places of pilgrimage in Karnataka, and among the must include places Murudeshwar Tour Packages.

Murudeshwar Temple is dedicated to Lord Shiva and is one of the main places to visit in Murudeshwar. The town was earlier known as 'Mrideshwara' and later renamed as Murudeshwar after the construction of the temple.

According to the legend, Ravana brought the Atma Lingam from Mount Kailash. Lord Ganesha using his trick fooled Ravana on his way to Lanka and put down the Linga on the ground at Gokarna. Angered by this, Ravana tried to uproot and destroy the Linga. The broken pieces of the lingam were cast away. The covering cloth of the lingam fell at Kanduka Giri and the Murudeshwar temple was built at the site.

This temple is situated on a small hill called Kanduka Giri, bounded by the sea on three sides. The temple was built with Chalukya and Kadamba sculptures in the Dravidian style. The temple is mainly built of granite. It has a 20-storey high Gopura guarded by two life-size concrete elephants at the steps leading into the temple. The tower is 249 feet tall and is considered the tallest Gopura in the world. The entire temple complex, including the 249 feet tall Raja Gopura was constructed to its present form by businessman and philanthropist Mr. RN. Shetty. In the sanctum, Lord Shiva graces in the form of Linga, 2 feet below the ground.

The Geetopadesha, Sun chariot, and the sculpture of Lord Ganesh receiving the Atma Linga from Ravana are the other sculptures built on the Kanduka hill. The 123 ft high Shiva statue is the second largest Shiva sculpture in the world and has become a landmark of Murudeshwar. As one ascends the hillock, there is a statue of Jattiga seated on a horse. There is a huge fort behind the temple, said to have been renovated by Tipu Sultan of Mysore. This is a great place to watch the sunset.

Maha Shivaratri is the major festival celebrated at this temple on a grand scale, attracting thousands of people from Karnataka and the nearby states.