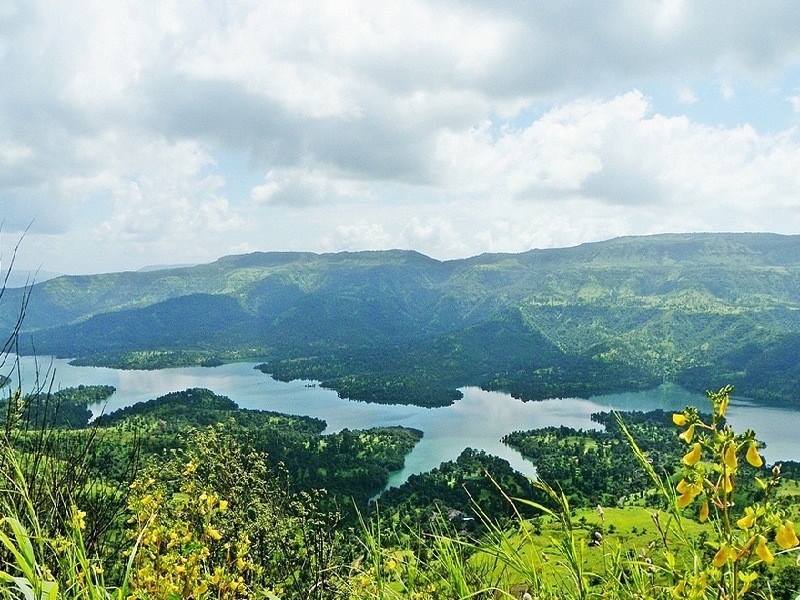 At a distance of 48 km from Panchgani, 54 km from Mahabaleshwar, 129 km from Pune, and 271 km from Mumbai, Satara is a town and district headquarters in Maharashtra. Located near the confluence of the River Krishna, and the River Venna, Satara is one of the must include places in Maharashtra packages, and among the top places to visit near Kolhapur.

Situated at an altitude of 2320 feet, it is a base station to several tourist destinations like Mahabaleshwar & Panchgani. The name of this town has been derived from the seven mountains surrounding the place implying Sat (seven) and Tara (hills). It is surrounded by the Pune district in the north, Solapur district in the east, Sangli district in the south, and Ratnagiri in the west.

Satara is another popular attraction not to miss in a Mahabaleshwar holiday packages. Shivaji, the great Maratha ruler, occupied this region in 1663 AD. After the 3rd Anglo-Maratha War, the British annexed the territory of Satara from the Marathas and assigned it to King Pratap Singh to look over the maintenance of the city. Later Satara became part of the Bombay Presidency in 1848 AD and became a district of Maharashtra after India's independence. Satara served as one of the principal centers of the Indian Independence Movement.

The district of Satara is lined with amazing temples and forts. The Ajinkyatara Fort is the major historical fort in Satara and was built by Raja Bhoj. About 3,000 feet high, the fort was once an important line of defense in southern Maharashtra, and now among the must-visit places as part of Satara holiday packages. The Fort also comprises ancient temples namely Devi Mangalai, Lord Shankar, and Lord Hanuman temple. The Vasota Fort, Sajjangad Fort and Kalyangad are the other popular forts in Satara. The Kaas Lake, Kaas Plateau, Thosegarh Falls, Gare Ganapathi Temple, Koteshwar Mandir, and the Abhayankar Vishnu Temple are some important tourist places in Satara.

The best time to visit Satara is from September to February.

How to Reach Satara - Full Details

Top 10 Places to Visit in Satara

Kaas Plateau was formed by volcanic activities and is covered by a thin soil cover as a result of which, .....

At a distance of 26 km from Satara, 73 km from Panchgani, 77 km from Mahabaleshwar, 141 km from Pune & 294 km from Mumbai, Thoseghar Falls is a popular waterfalls located at Thoseghar village in Satara district of Maharashtra. It is one of the top waterfalls in Maharashtra and also one of the highest waterfalls in India. Thoseghar falls is among the most popular Satara places to visit and one of the best monsoon Tourist places near Mumbai.

Thoseghar waterfall is a scenic spot located at the edge of the Konkan region. The waterfall is drops through a series of cascades with a total height of about 500 m. This is a seasonal waterfall which is only seen in monsoon and drops into a deep gorge.

Thoseghar Falls is famous for its serenity, clam and quiet natural surroundings. It is a wonderful place where one can enjoy the beauty of the nature. There is a picnic area and a newly constructed .....

At a distance of 6 km from Kas Pathar, 28 km from Satara, 41 km from Mahabaleshwar, 53 km from Panchgani, 144 km from Pune & 299 km from Mumbai, Vajrai Falls is a picturesque waterfall located near Kas Flower Valley in Satara district of Maharashtra. This is one of the most spectacular waterfalls in Maharashtra, and also one of the top monsoon tourist places near Pune.

Vajrai Falls is a three-tier waterfall cascading down from a height of around 853 feet (260 m). This is a perennial waterfall but is very spectacular during monsoons. People from different parts of Maharashtra flock to this fall during the monsoons as part of Satara tour packages to watch the beautiful flow of the stream. Urmodi River is believed to start from the Vajrai Waterfalls. There are many small caves near Vajrai Falls which can be visited along with the falls.

At a distance of 16 km from Satara, 67 km from Mahabaleshwar and 64 km from Panchgani, Sajjangad is an ancient hill fort and a pilgrimage place located near Satara in Maharashtra. It is one of the top places to visit in Satara and is a protected monument.

Sajjangarh Fort was earlier known as Aashwalayangad and was built by the Bahamani Emperors in between 1347-1527 AD. It was later conquered by Adil Sha in 16th century AD. In the same year the Mughals attacked the Sha rulers and brought this fort under their control. The fort then came under the rule of Chhatrapati Shivaji Maharaj. Previously known as Parali Fort, it was renamed to Sajjangad after Shivaji Maharaj requested Sri Ramdas to set up his permanent abode here.

Sajjangad Fort is the final resting place of Samarth Ramdas, he was the spiritual Guru of Chhatrapati Shivaji. His teachings and works written in books such as Dasbodh are read and followed by many people even today in the state of Maharashtra. This fort is well .....

At a distance of 4 km from Satara Bus Stand, 58 km from Mahabaleshwar, and 52 km from Panchgani, Ajinkyatara is an ancient hill fort situated on one of the seven mountains surrounding the city of Satara in the Sahyadri Mountains of Maharashtra. It is one of the major heritage places in Maharashtra, and among the must include places in Satara tour packages.

Situated atop Ajinkyatara Mountain, at an altitude of 3,300 feet, Ajinkyatara Fort offers a panoramic view of Satara City. Among the top places to visit in Satara, Ajinkyatara Fort was built by Raja Bhoj of the Shilhara dynasty. In 1673 CE, Chhatrapati Shivaji Maharaj took control of this fort from Adil Sha and further Aurangajeb controlled this fort between 1700 CE and 1706 CE. In 1708 CE, Shahu Maharaj won Ajinkyatara, remained with the Marathas till .....

At a distance of 54 km from Satara, 123 km from Pune, 177 km from Kolhapur, 243 km from Mumbai, and 377 km from Panaji, Mahabaleshwar is a scenic hill town in Satara district of Maharashtra. At an altitude of 1,353 m in the Western Ghats, it is one of the popular hill stations in India, and among the top places to visit in Maharashtra.


This pretty hill station is often referred to as the queen of hill stations in Maharashtra. It is one of the popular places to visit near Kolhapur, Pune & Mumbai. It offers a panoramic view of the plains with the imposing sloppy peaks and surrounding woods. Mahabaleshwar constitutes three villages - Malcolm Peth, Old Mahabaleshwar and some part of the Shindola village. Arthur's Seat, Lingmala Waterfall, and Pratapgad Fort are among the must include .....

At a distance of 18 km from Mahabaleshwar, 48 km from Satara, 104 km from Pune, and 254 km from Mumbai, Panchgani, also called Paachgani, is a famous hill station and a municipal council in the Satara district of Maharashtra. It is one of the hill stations near Pune, & among the must include places in Maharashtra tour packages.

Situated at an altitude of 1334 m, Panchgani is one of the best places to visit near Mumbai. Panchgani is bordered by Wai, Bavdhan, and Nagewadi dam in the east, Gureghar in the west, Khingar and Rajpuri in the south, and Dhom dam in the north. Panchgani is nestled in the middle of five hills in the Sahyadri mountain ranges, also there are five villages around the Panchgani which are Dandeghar, Khingar, Godwali, Amral & Taighat. Panchgani is can be visited along with Mahabaleshwar tour packages.

At a distance of 5 km from Satara Bus Station, Sangam Mahuli and Kshetra Mahuli are two sacred villages situated at the confluence of Krishna and Venna Rivers in Satara district of Maharashtra.

Sangam Mahuli is one of the popular pilgrimage places to visit in Satara. The other side of the river Krishna is called Kshetra Mahuli. These villages earlier were part of Aundh Princely State. Kshetra Mahuli was the birth place of Ramshastri Prabhune, the famous spiritual and political adviser of the fourth Peshva Madhavrav (1761-1772 CE). Mahuli was the place of meeting between the last Peshva Bajirav (1796-1817 CE) and Sir John Malcolm just before the Anglo-Maratha war was declared.

There are 2 well known temples around the convergence of the rivers - Vishweshwar and Rameshwar. Sri Kashi Vishweshwar Temple is situated in Sangam Mahuli and is dedicated to Lord Shiva. The temple was built in 1735 CE by Shripatrao Pant Pratinidhi. This land was donated by Shahu Maharaj to Shripatrao .....

At a distance of 3 km from Satara Bus Station, Natraj Mandir, also known as Uttara Chidambaram Temple, is a popular temple located off NH4, connecting Satara and Solapur. It is one of the places to visit in Satara.

The Natraj Mandir is dedicated to Lord Natraj, a manifestation of Lord Shiva performing the Tandava dance. The foundation for the temple was laid in 1981. Samanna, a resident of Satara gifted the land for building the temple. The funding was given by the state governments of Maharashtra, Karnataka, Andhra Pradesh, and Tamil Nadu while the timber needed for the entire construction of the temple was given by the government of Kerala. It is one of the popular temples to visit as part of Satara tour packages.

It is a replica of Sri Natraj Temple at Chidambaram in Tamil Nadu, in a much smaller size, and is a desire of Sri Chandra Shekharendra .....

At a distance of 84 km from Ganpatipule, 90 km from Ratnagiri, 107 km from Mahabaleshwar, 125 km from Satara, 163 km from Kolhapur, 238 km from Pune, 259 km from Mumbai, and 303 km from Panjim, Chiplun is a town in the Ratnagiri district of Maharashtra. Bang on the Mumbai-Goa highway, it is one of the popular Maharashtra tourist places, and among the prominent places to visit near Kolhapur.

Situated between the Western Ghats, and the Arabian Sea, Chiplun has stunning natural beauty, which includes lush greenery and stunning waterfalls. Chiplun means 'The abode of Lord Parashurama', got its name because of the famous temple it houses. Lies near the source of the Vashishti river, Chiplun is also an industrial town and happens to be one of the must include places in Konkan Tour.

Chiplun was believed to be the first home of the Konkanasth or Chitpavan Brahmans. According to folklore, .....