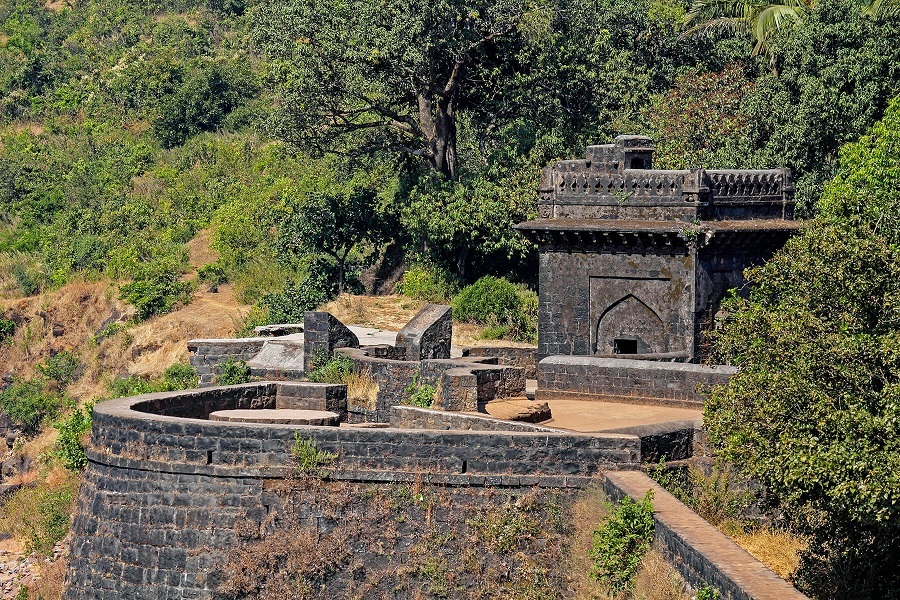 At a distance of 22 km from Kolhapur, Panhala Fort is an ancient fort situated at Panhala town in Kolhapur district of Maharashtra. Also known as Panhalgad, it is one of the historical forts in Maharashtra, and among the best places to visit near Kolhapur.

Panhala Fort is strategically located looking over a pass in the Sahyadri mountain range which was a major trade route from Bijapur in the interior of Maharashtra to the coastal areas. Due to its strategic location, it was the center of several battles in the Deccan involving the Marathas, the Mughals, and the British East India Company, the most notable being the Battle of Pawan Khind. It is also called the 'Fort of Snakes' as it is zigzagged in shape.

Built between 1178 and 1209 CE, Panhala Fort was one of the 15 forts built by the Shilahara ruler Bhoja II. A copper plate found in Satara shows that Raja Bhoja held court at Panhala from 1191-1192 CE. It was successively held by the Yadava and Bahamani Kings. In 1489 AD, the fort and the territory were taken over by the Adil Shahi dynasty of Bijapur. Shivaji seized the fort in 1659 AD. In July 1660, Shivaji escaped from the Adilshahi blockade around Fort Panhala and the Battle of Pawan Khind. The fort went to Adil Shah, and it was only later, in 1673, that Shivaji occupied the fort once again, stationing 15,000 horses and 20,000 soldiers here. Panhala would be the second-most important fort in the Maratha empire after the capital, Raigad.

After the death of Shivaji in 1680 CE, Panhala passed to his son and successor, Sambhaji. In 1689, after the fall of Raigad to the Mughal army, it was Panhala that served as the de-facto capital of the Marathas. It was here that Queen Tarabai, the widow of Shivaji's younger son Rajaram I, declared an independent kingdom of Kolhapur with Panhala as the capital in 1709. The Panhala Fort was finally given over to the British in 1827, but in 1844, a British Colonel was seized and held hostage inside the fort by some rebels, which led to British forces crashing through the fort and keeping it under guard up until independence in 1947.

Looking over the green slopes of Sahyadri, the fort is one of the largest forts in the Deccan, with 7 km of fortification along with full proof protection guaranteed by three double-walled gates which are massive in size. Most of the architecture is of the Bijapur style with the peacock motif of the Bahmani Sultanate prominently visible on several structures. The Panhala Fort had three magnificent doorways. The Teen Darwaza was the main entrance with Persian inscriptions and carved motifs including one of Lord Ganesh, the favorite deity of the Marathas. The second one, Char Darwaza, was demolished during the British siege and the last one, Wagh Darwaza, used to be an illusion with a small courtyard beyond it, where the intruders would get trapped and be defeated.

There are several monuments inside the fort which are considered notable by the Archaeological Survey of India. Andhar Bavadi or the Hidden Well is one of the chief features of Panhala Fort. Built by Adil Shah, it was a three-storey structure that kept the main water source of the fort hidden from the besieging enemies and protected it against poisoning, along with residential quarters, soldiers posting recesses, and escape routes leading outside the fort. This worked as a second level firewall to the core of the fort. Situated at the heart of the fort, Ambarkhana were three granaries used for storing a large number of khandis. The three buildings were built in the Bijapuri architectural style with stairs on each side, numerous bays, and holes on top. The Ganga, Yamuna, and Saraswati Kothis could store as much as 25,000 khandis and helped Shivaji Maharaj to withstand the long siege of 5 months by Siddhi Johar before the famous Battle of Pavan Khind.

Kalavanticha Mahal was basically the terrace room for the courtesans, which is now in ruins due to the British dismantling and effect of time. However, the ornate inscriptions on the remaining walls and ceilings still stand for tourists to have a glimpse at. This Mahal was used by the Bahamanis as the residence for the court ladies. Sajja Kothi is a single-story structure looking over the deep valley below and was used as an imprisonment chamber for Sambhaji by the orders of his father, Shivaji. The Rajdindi bastion was one of the hidden exits of the fort to be used in times of an emergency. It was used by Shivaji to escape to Vishalgad during the Battle of Pavan Khind and is still intact. The palace of Tarabai, arguably the fort's most famous resident, is still intact. It is now used to house a school, several government offices, and a boys' hostel. Besides, one can also visit Sambhaji temple, Someshwar temple, Ambabai Temple, Mahakali temple, along with the mausoleum of Jijabai.