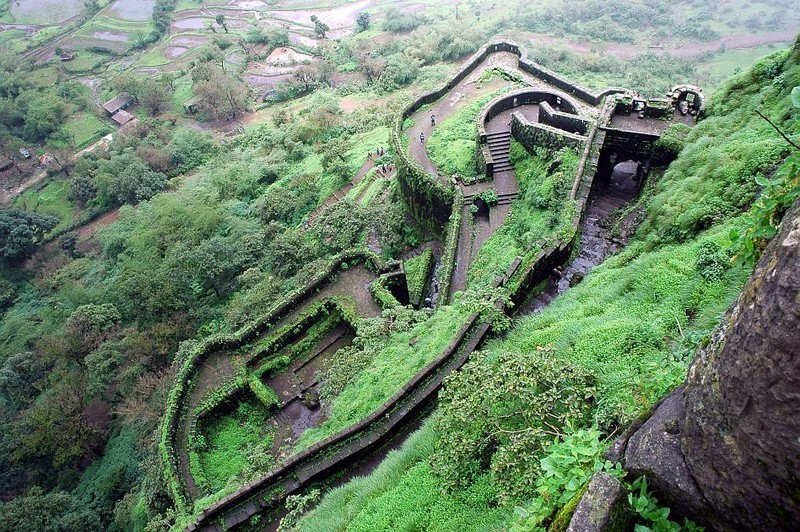 At a distance of 11 km from Lonavala, 66 km from Pune & 114 km from Mumbai, the Lohagad Fort (Iron Fort) is a historical fort situated along the Sahyadri hills in the Lonavala region of Maharashtra. It is one of the best tourist places to visit in Lonavala and also one of the popular heritage in Maharashtra.

Perched atop a hillock at an altitude of 1050 m, the Lohagad Fort separates the Indrayani basin from the Pawna basin. It is also among the popular trekking places to visit near Pune & Mumbai. It is one of the most visited forts in Maharashtra as part of Lonavala tour packages. The fort was built by Guru Govind Singh in 1564 CE to serve as a prison. Shivaji Maharaj captured it in 1648 CE, but he was forced to surrender it to the Mughals in 1665 CE by the Treaty of Purandar. Shivaji Maharaj recaptured the fort in 1670 CE and used it for keeping his treasury. Later in Peshwa's time, Nana Phadnavis used this fort for living and built several structures in the fort such as a big tank and a step-well. Recently the fort has been declared as a protected monument by the government.

The hillfort is designed in the shape of the tail of a scorpion. The fort can be reached from any of its four entrances, namely Maha Darwaja, Ganesh Darwaja, Hanuman Darwaja and Narayan Darwaja. Exquisite sculpting can be seen on the Maha Darwaja and there is a small cave at the third gate which was initially used for storage of food material. All the four gates of the fort are still intact.

Lohagad makes an ideal trekking destination for trekkers from Pune and Mumbai because of its accessibility, ease of trek, and lush green surroundings. Lohagad trek is very popular, especially during monsoons. Malavli is the base of the trek, which is around 7 km from Lohagad. It is a simple, very scenic, and pleasant trek and the distance from Malavli and Lohagad can be covered in two hours.

This fort offers aerial views of Karla, Bhaja caves, and Pawna Lake. The highlight of the Lohagad fort trek is the 'Vinchu Kata' fortification resembling a scorpion's tail. This structure is situated outside of the main section of the fort and requires an additional 15-20 minutes of walking to reach the edge. The dargah is another major landmark within Lohagad which is located near Maha Darwaja.