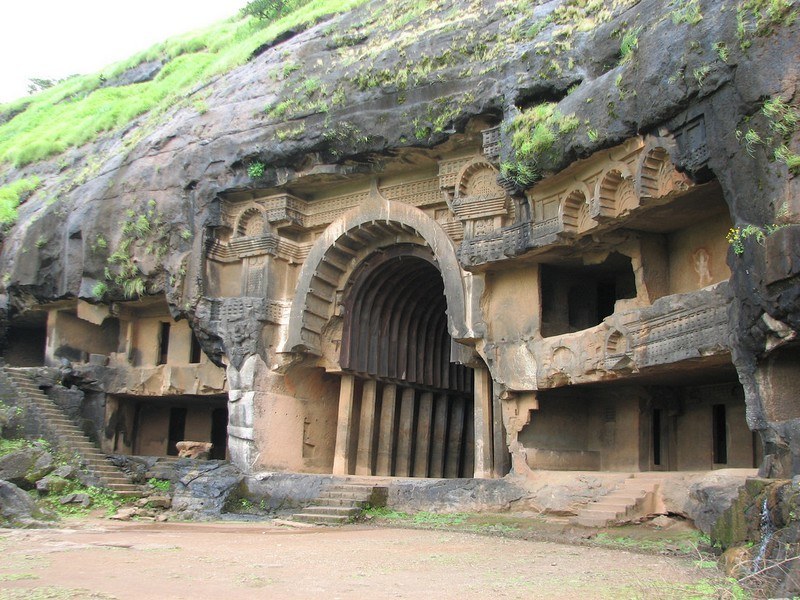 At a distance of 5 km from Lohagad Fort, 15 km from Lonavala, 71 km from Pune & 119 km from Mumbai, Bhaja Caves are one of the popular Buddhist caves of Hinayana faith in Maharashtra. These caves are one of the top places to visit in Lonavala and among the well known tourist places to visit near Pune & Mumbai. These caves are well known historical places near Pune protected as National Monument by the Archaeological Survey of India.

Bhaja Caves or Bhaje caves are a group of 22 rock-cut caves dating back to the 2nd century BC. The caves are 400 feet above the village of Bhaja on an ancient trade route, which extends from the eastern side of the Arabian Sea towards the Deccan.

The Bhaja Caves are similar to the Karla Caves in style and architectural designs. The most prominent among the excavations is the chaityagriha (Cave 12). The chaityagriha is considered to be the earliest of its kind. It consists of a large apsidal hall and is divided into a central nave and side aisles by 27 pillars. The ceiling of the nave is vaulted and original wooden beams are fixed. Chaitya contains stupa at its far end with a hole in the top for wooden umbrella.

Cave 18 is a monastery and consists of a rectangular hall with a front pillared verandah. Depictions of the Sun God Surya and Lord Indra are present inside this cave. It is also home to two beautifully adorned doorways. Close to the last cave is a seasonal waterfall that falls into a small pool at the bottom. This cave also provide important proof regarding the history of the Tabla, an Indian percussion instrument, since carvings from 2nd century BC show a woman playing Tabla and another performing a dance.

Apart from Cave 18, the group of Caves at Bhaja has other monasteries of simple type, halls with verandah. The notable feature of the caves is its group of 14 stupas, which enfold an irregular excavation with five stupas inside and nine outside. The stupas are relics of resident monks, who died at Bhaja, and display an inscription with the names of three monks, Ampinika, Dhammagiri and Sanghdina.

The caves can be reached either by cab or walk from Lohagad which is around 5 km.