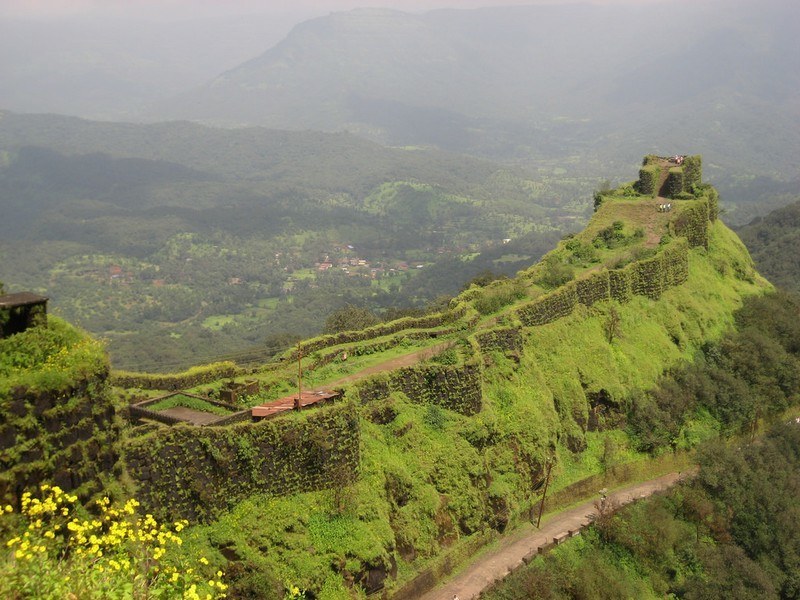 #6 of 27 Places to Visit in Mahabaleshwar

At a distance of 20 km from Mahabaleshwar, 140 km from Pune & 221 km from Mumbai, Pratapgad, also known as Pratapgarh, is a large hill fort located in the Satara district of Maharashtra. It is one of the best heritage places to visit near Mumbai, and among the popular attractions not to miss as part of Mahabaleshwar packages.

The fort lies at an altitude of 1080 m and is built on a spur that overlooks the road between the villages of Par and Kinesvar. Maratha king Shivaji Maharaj had commissioned Moropant Pingle, his prime minister, to commence the construction of this fort to defend Nira and the Koyna River banks, and also to guard the Par pass. It is one of the most scenic places to visit in Mahabaleshwar. The construction of the fortress was completed in the year 1656. The fort stands as the witness of the historic Battle of Pratapgarh between Shivaji and Afzal Khan, the commander of the Bijapur Sultanate, on 10th November 1659. In 1818, the Maratha forces had to surrender the Pratapgad Fort after losing the third Anglo-Maratha War.

The fort is divided into two parts, the lower fort, and the upper fort. The upper fort was built upon the crest of the hill. It is roughly square, 180 m long on each side. The upper fort comprises several buildings, including a Mahadev Temple. The lower fort situated at the southeast end of the fort is defended by tall towers and strongholds which are 10-12 m high. The lower fort is around 320 m long and 110 m wide. It houses Bhavani Temple on the eastern side. It is believed that Chatrapati Shivaji Maharaja was blessed with a shining sword at this temple. A 17 feet tall bronze figure of Shivaji was erected and unveiled by Jawaharlal Nehru, on 30th November 1957 to commemorate and pay homage to Shivaji Maharaj.

Today this fort has become a famous tourist spot near Mahabaleshwar as it is still in fairly good condition. There is a motorable road up to the entrance of the fort. Visitors have to explore the fort by walk/trek (around 1 km ). Inside the fort, there are small eateries for food and a rest house available for tourists. The best time to visit Pratapgad Fort is from June to October. A trip to Pratapgad Fort can be planned any time of the year but during monsoons, the beauty of the region is magnified further.
Timings: 10 AM to 6 PM