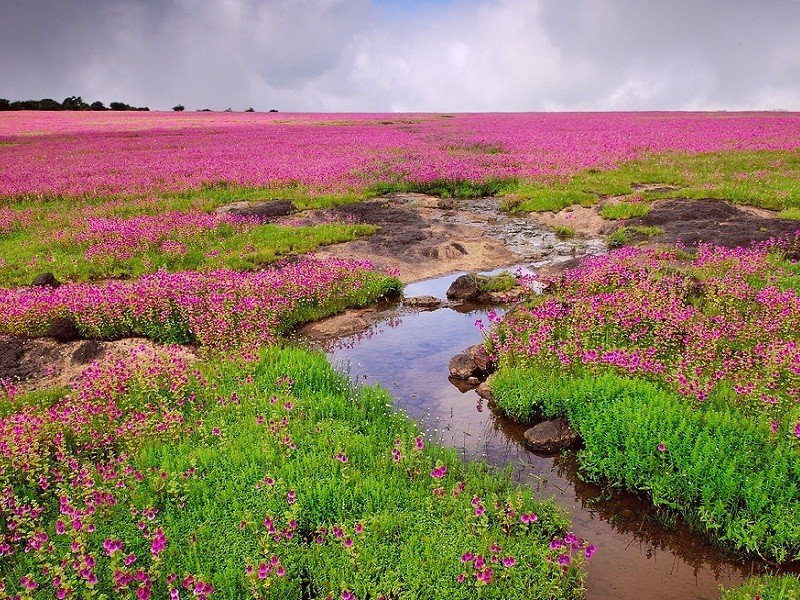 Kaas Plateau was formed by volcanic activities and is covered by a thin soil cover as a result of which, no vegetation thrives in the region. This area comes under a very high rainfall zone. Due to this, the flora and fauna of the region are quite unique. These unique ecological features make Kaas one of the hotspots of biodiversity.

The Plateau is well known for its unique biosphere, high hill plateaus, and grasslands. During monsoon season, especially in the month of August, the Plateau comes to life with various types of flowers. Kaas has more than 850 different species of flowering plants of which 624 are listed on the IUCN Red List. These include orchids, shrubs such as the Karvy, and carnivorous plants such as Drosera Indica.

Kaas Plateau overlooks the dense evergreen forests of the Koyna Wildlife Sanctuary and serves as the catchment area of the Koyna Dam. This is also a haven for bird watchers, as many species of birds can be spotted here. There is a wonderful lake called Kaas Lake, which is situated towards the south of the Plateau.

Kas Pathar attracts many tourists, scientists, and nature lovers. To control possible damage by excessive tourism, the Government has restricted the number of visitors to 2,000 per day. Walking through the flowers covering the Plateau is a wonderful experience.

The best time to visit Kas Pathar is from August to October. Many people visit Kaas during the rains; however, the plants bloom only in late August to September.