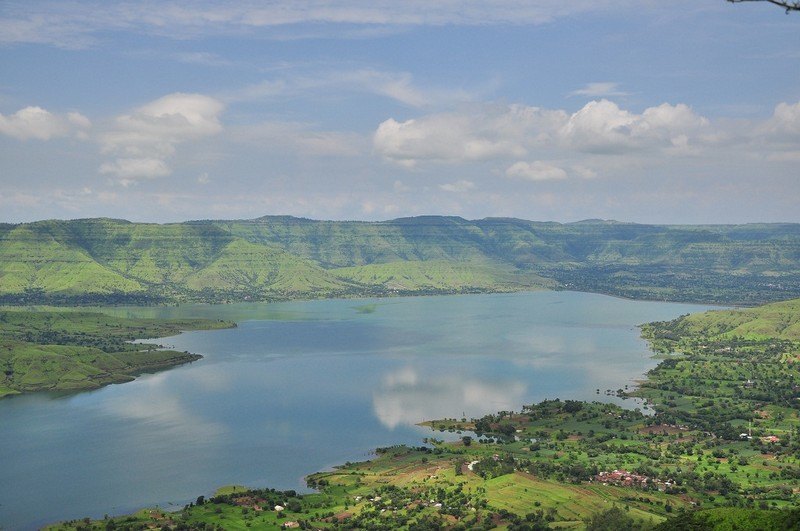 At a distance of 18 km from Mahabaleshwar, 48 km from Satara, 104 km from Pune, and 254 km from Mumbai, Panchgani, also called Paachgani, is a famous hill station and a municipal council in the Satara district of Maharashtra. It is one of the hill stations near Pune, & among the must include places in Maharashtra tour packages.

Situated at an altitude of 1334 m, Panchgani is one of the best places to visit near Mumbai. Panchgani is bordered by Wai, Bavdhan, and Nagewadi dam in the east, Gureghar in the west, Khingar and Rajpuri in the south, and Dhom dam in the north. Panchgani is nestled in the middle of five hills in the Sahyadri mountain ranges, also there are five villages around the Panchgani which are Dandeghar, Khingar, Godwali, Amral & Taighat. Panchgani is can be visited along with Mahabaleshwar tour packages.

The town was discovered by the British as a summer resort in the 1860s. Mahabaleshwar was the summer resort of choice for the British, but it was uninhabitable during the monsoons. Panchgani was developed as a retirement place for the British as it remained pleasant throughout the year. John Chesson, a British superintendent, was responsible for the transformation of Panchgani into a summer resort. It is also said that, during Vanavasa, the Pandavas spent some time in Panchgani and the cave where they stayed in the famous Devil's Kitchen, among the must include places in Panchgani tour packages.

Pune International Airport is the nearest airport, which is about 111 km from Panchgani and has daily flights from Mumbai, Bangalore, Hyderabad, Chennai, Kochi, Delhi, Kolkata, and Goa. Satara is the nearest railhead, which is about 52 km from Panchgani. It has trains from Goa, Delhi, Mumbai, Pune, Hubli, Kochi, Kolhapur, Tirunelveli, Mysore, Pondicherry, Bangalore, Ahmedabad, Gorakhpur, Ajmer, and Jodhpur. Panchgani is well connected by bus with Mahabaleshwar, Mumbai, Pune, Satara, Bangalore, Goa, Ahmedabad, and Shirdi.

How to Reach Panchgani - Full Details

Top 10 Places to Visit in Panchgani

#1 of 16 Places to Visit in Panchgani

At a distance of 2 km from Panchgani and 20 km from Mahabaleshwar Bus Stand, Table Land is the highest point in Panchgani and is situated at an elevation of 4550 feet above sea level. This is one of the best tourist places to visit in Panchgani.

Table Land is a vast expanse of flat laterite rock surrounded by hills hence the name Table Land. This volcanic plateau is Asia's second longest mountain plateau after the Tibetan plateau, and among the must-visit places as part of Panchgani tour packages. This place offers an aerial view of the entire Panchgani and nearby valleys.

These naturally flattened hills are a good attraction for nature lovers and adventure seekers. The place also has several activities like horse riding, merry-go-rounds, mini trains, food stalls, and a couple of game counters. Owing to its elevation, the place also offers .....

#2 of 16 Places to Visit in Panchgani

At a distance of 21 km from Panchgani & 97 km from Pune, Dhom Dam is an earth fill and gravity dam situated near Wai in the Satara district of Maharashtra. It is one of the popular places to visit as part of Panchgani tour packages, and among the well-known places to visit near Pune for one day trip.

Built on the Krishna River, the construction of the dam was started in 1976 and completed in 1982. It is one of the largest civil engineering projects in India at that time and also the first dam to be built on the Krishna River in Maharashtra. The main purpose of the construction of the Dhom dam was to ensure adequate water supply for industries in the region, for agricultural activities and to supply potable drinking water to the populace of Panchgani, Mahabaleshwar, and Wai regions. The dam is also the chief source of water supply for farmers of Koregaon, Javli, and Khandala taluks of .....

#3 of 16 Places to Visit in Panchgani

At a distance of 2 km from Panchgani Bus Stand, Parsi Point is a scenic viewpoint situated on the way to Mahabaleshwar in Satara district of Maharashtra. It is one of the good points at Panchgani to get a picturesque view. The point is located at the entrance of Panchgani town while coming from Mahabaleshwar.

Parsi Point offer spectacular views of the mountains, Krishna valley and the backwaters of Dhom dam. This popular picnic spot has derived its name from the fact that in earlier days, it was a favourite spot of the Parsi Community. There is small entry free at the entrance of the view the point.

#4 of 16 Places to Visit in Panchgani

At a distance of 2 km from Panchgani Bus Stand, Sydney Point is one of the famous viewpoints in Panchgani hill station in Satara district of Maharashtra.

Sydney Point is situated on a hill that faces Krishna Valley. It was named after Sir Sidney Beckwarth, Commander in Chief, who succeeded Sir John Malcolm as Bombay's Governor in 1830.Sydney Point is famous for providing charming views of the Krishna Valley, Dhom Dam, Kamalgad Fort and the city of Wai. The hillock also offers beautiful views of the hill ranges of Pandavgad and Mandhardeo.

#5 of 16 Places to Visit in Panchgani

At a distance of 54 km from Satara, 123 km from Pune, 177 km from Kolhapur, 243 km from Mumbai, and 377 km from Panaji, Mahabaleshwar is a scenic hill town in Satara district of Maharashtra. At an altitude of 1,353 m in the Western Ghats, it is one of the popular hill stations in India, and among the top places to visit in Maharashtra.


This pretty hill station is often referred to as the queen of hill stations in Maharashtra. It is one of the popular places to visit near Kolhapur, Pune & Mumbai. It offers a panoramic view of the plains with the imposing sloppy peaks and surrounding woods. Mahabaleshwar constitutes three villages - Malcolm Peth, Old Mahabaleshwar and some part of the Shindola village. Arthur's Seat, Lingmala Waterfall, and Pratapgad Fort are among the must include .....

#6 of 16 Places to Visit in Panchgani

Kaas Plateau was formed by volcanic activities and is covered by a thin soil cover as a result of which, .....

#7 of 16 Places to Visit in Panchgani

At a distance of 6 km from Kas Pathar, 28 km from Satara, 41 km from Mahabaleshwar, 53 km from Panchgani, 144 km from Pune & 299 km from Mumbai, Vajrai Falls is a picturesque waterfall located near Kas Flower Valley in Satara district of Maharashtra. This is one of the most spectacular waterfalls in Maharashtra, and also one of the top monsoon tourist places near Pune.

Vajrai Falls is a three-tier waterfall cascading down from a height of around 853 feet (260 m). This is a perennial waterfall but is very spectacular during monsoons. People from different parts of Maharashtra flock to this fall during the monsoons as part of Satara tour packages to watch the beautiful flow of the stream. Urmodi River is believed to start from the Vajrai Waterfalls. There are many small caves near Vajrai Falls which can be visited along with the falls.

#8 of 16 Places to Visit in Panchgani

At a distance of 7 km from Panchgani Bus Station, Rajpuri Caves are one amongst the most ancient attractions of the Panchgani region.

There are four caves and these ancient caves are surrounded by many water kunds. It is believed that these caves were used for penance and religious rituals by Lord Kartikeya. It is also said to be the home of Pandavas during their exile. Devotees believe that taking bath in these holy kunds will provide relief from all kinds of diseases and evils.

The main attraction of Rajpuri Caves is the Lord Kartikeya Temple, which is supposed to have been built with the sand taken from the caves. Entrance of the cave contains several stone plates with inscriptions on them. Two traditional images of Nandi are located in front of the caves. Out of the two images, one lies right opposite to the entrance to the cave. The thaipooyam festival is the main attraction of this temple which is celebrated in the months of January / February.

#9 of 16 Places to Visit in Panchgani

At a distance of 41 km from Panchgani and 59 km from Mahabaleshwar, Kamalgad, also called Bhelanja or Kattalgad, is a square hill fort situated near Wai in Satara district of Maharashtra. It is one of the popular places of heritage in Maharashtra, and among the must include places in Panchgani packages.

Situated at an elevation of over 4511 feet, the fort offers breathtaking views of the magnificent Dhom Dam. The builder of the fort is unknown. During Maratha times, Kamalgad, Pandavgad, and other forts in the area were administered by a Mokasaddar from Bijapur. Early documents written in Modi script of the Marathi language refer to the fort as Kattalgad. In April 1818, Kamalgad surrendered after resistance to a British army commanded by Major Thatcher. Under the British, the fort was used to execute prisoners of war. It is one of the famous places to visit in Panchgani.

At a distance of 2 km from Panchgani Bus Stand, Devil's Kitchen is situated to the south of Table Land in Panchgani hill station.

According to mythology, this is the place where Pandavas of Mahabharata stayed here for a while during their exile. This place was used to cook their food. Some people claim that Pandvgadh Caves are also built by them and bear their name. The place is now a beautiful sightseeing spot which is popular among tourists.

The place is situated in close proximity to Table Land and visitor can either take a short walk or hire a private taxi for sightseeing.