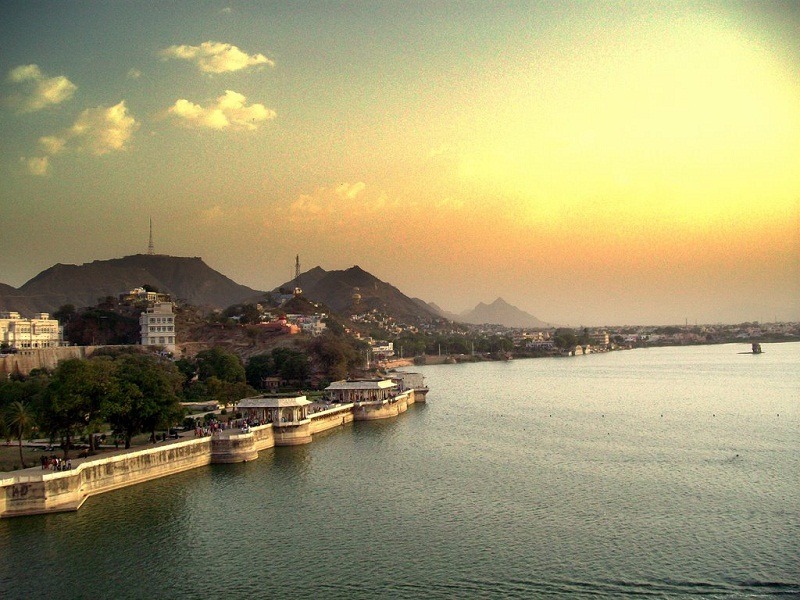 At a distance of 2 km from Ajmer Junction Railway Station, Anasagar Lake is an artificial lake situated in Ajmer, Rajasthan. It is one of the beautiful lakes in Rajasthan and also one of the top tourist places in Ajmer.

Ana Sagar Lake was built by raising a dam across the Luni or Lavanavari River. The lake was built by Arnoraja Chauhan, the grandfather of Prithviraj Chauhan, in 1135 - 1150 AD and was named after him. The lake comprises catchments that were built with the help of local populace. Spread over 13 km, Anasagar Lake is the biggest Lake in Ajmer with a depth of maximum of 4.4 m and can store about 4.75 million cubics of water. The lake also comprises Baradari or pavilions that were built by Shah Jahan in 1637 AD.
According to legend, when the Sufi saint Moinuddin Chishti arrived in Ajmer, he and his followers were banned from using waters of Ana Sagar. He requested to get a cup of water that was granted. When the cup was filled, the water of the lake got dried up miraculously. People requested to return the water, the saint gracefully did so. Since then Moinuddin Chishti got multitude of followers.

The lake is surrounded by beautiful parks and marble pavilions. The Daulat Bagh Gardens, located on the banks of the lake was built by Jehangir. There is an island in the center of the lake which is accessible by boat. From the east side of the Daulat Bagh Gardens, tourists can hire a boat or water scooter to reach the island. A circuit house is there on a hill near the lake that used to be British Residency.

The best time to visit Anasagar Lake is between October and March when the climate is pleasant and the water level is full. The lake dries up in the summer season.