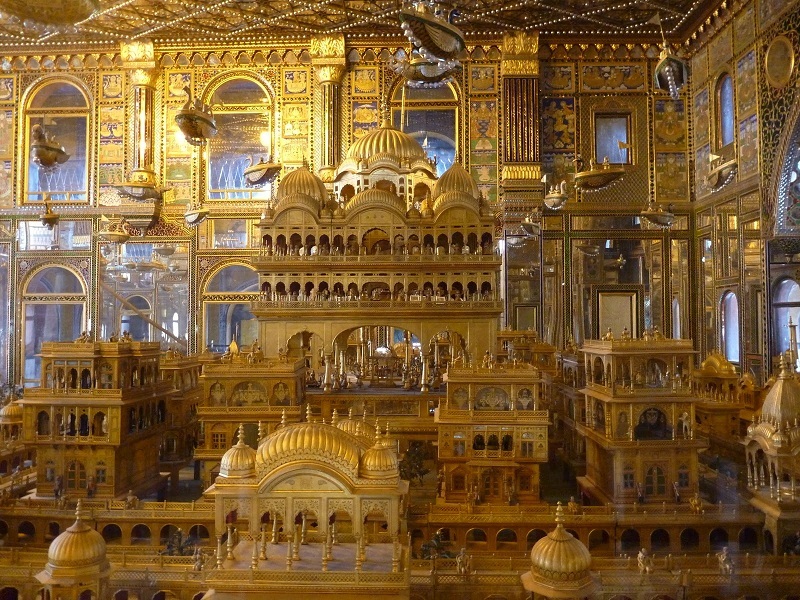 Travel Tips: Only Jains are allowed in the main temple but others can visit the Swarna Nagari just behind the main worship area.

At a distance of 1 km from Ajmer Junction Railway Station and 1.5 km from Ajmer Dargah Sharif, Nasiyan Temple is a Jain temple located at Prithviraj Marg in Ajmer town of Rajasthan. Popularly known as Soni Ji Ki Nasiyan, the Jain temple is one of the best Jain Temples in Rajasthan and among the famous Ajmer tourist places.

Nasiyan Temple is dedicated to Lord Rishabhdev, the first Jain Tirthankara. Built by Seth Moolchand Soni in 1865 CE, the temple belongs to the Digamber sect of Jainism. The name of the temple is Siddhkoot Chaityalaya and is also known as 'Red Temple' as it is built of red sand stone. After the Swarna Nagari was added to the temple in 1895 CE, it popularly began to be called as Sone ka Mandir emphasizing the golden structure.

The temple has been constructed in red stone brought from Karauli, following the typical South Indian style of temple architecture. The gigantic gateway, also termed as Gopuram, is a fine example of its rich architectural technique. The temple is a two-storied structure and is divided into two parts. One part of the temple is the worship area comprising the idol of Lord Adinath or Rishabhdev, while the other forms a museum and includes a hall. The interior of the museum depicts the five stages (Panch Kalyanak) in the life of Lord Adinath.

The first floor of the temple popularly called as Swarna Nagari hall houses one of the most astonishing architectural creations of the Universe in the version of Jainism which also constitutes of gold plate replicas of every Jain temples of the country. An estimated 1000 kilograms of gold has been used in the construction of the marvel depicting panorama from Jain mythology, and of the ancient towns of Ayodhya and Prayag. The temple also showcases wooden gild representations, glass engravings and paintings that display scenes from Jain scriptures. Festooned by precious stones, gold and silver work, the place is also termed as Soni Ji Ki Nasiyan.

The inner chamber of the temple is decorated with silver balls hanging from the ceiling. The interior is adorned with Belgium stain glass, mineral colour paintings and stain glasswork. There is a staff erected in the middle of the compound, which is called Maanstambh. It is 82 foot high and was constructed by Seth Sir Bhagchand Soni. This white marble column stands high in the courtyard of the temple and has been designed in an artistic manner with images of the Jain Tirthankars engraved on it.