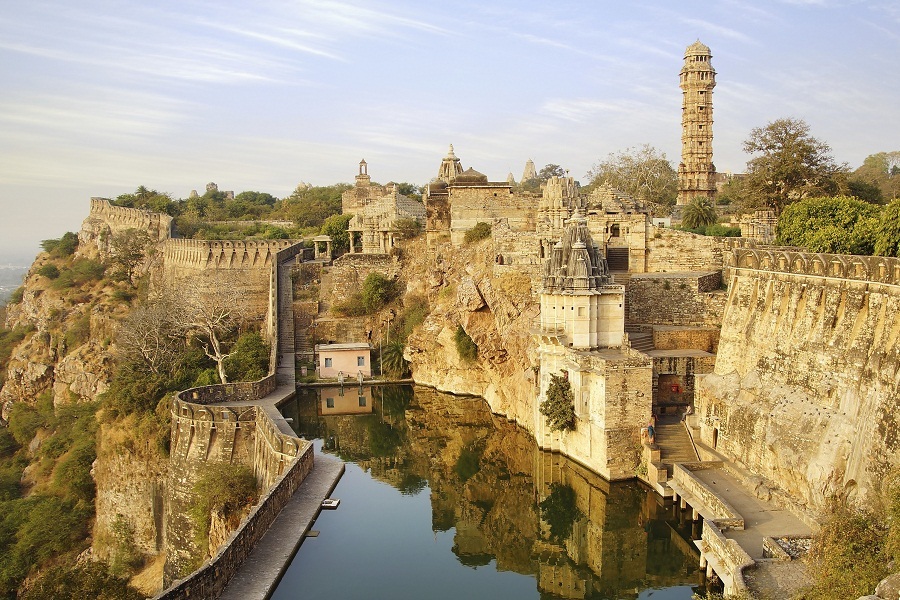 #1 of 9 Places to Visit in Chittorgarh

Travel Tips: Trek to the fort is steep and also the places within the fort are situated at some distance from each other, hence visitors would not be able to cover them all on foot. It is better to rent a bike or hire an auto / cab to explore all the places inside the fort and it takes 4 hours.


At a distance of 7 km from Chittorgarh Railway Station, Chittorgarh Fort is an ancient hill fort situated in the Chittorgarh town of Rajasthan. It one of the forts in India, and among the top heritage places in Rajasthan.

Chittorgarh Fort is a World Heritage Site included in hill forts of Rajasthan. The original Chittorgarh Fort was built by the Maurya dynasty in the 7th century AD. It was then known as Chitrakut after Chitrangada Mori, a Rajput chieftain as written on historical Mewari silver coins. According to history, the Mori dynasty was in possession of the fort when Bappa Rawal, the founder of the kingdom of Mewar, seized Chittorgarh and made it his capital in 734 AD. After that, his descendants ruled Mewar, which stretched from Gujarat to Ajmer, until the 16th century AD.

Chittorgarh was one of the most contested seats of power in India with probably some of the most glorious battles being fought over its possession. Regarded as the prime attractions of Chittorgarh holiday packages, the fort was attacked three times and every time it got saved by the daring heroism of the Rajput warriors. In 1303 AD, for the first time, this fort was attacked by Allaudin Khilji to fulfill his desire to make off with Rani Padmini. For the second time, the fort was sacked by Sultan Bahadur Shah of Gujarat in 1535 AD. In 1567 AD, Akbar defeated Maharana Udai Singh II who left the fort and founded Udaipur. Following these defeats, Jauhar was committed thrice by more than 13,000 ladies and children of the Rajput soldiers who laid their lives in battles at Chittorgarh Fort, first led by Rani Padmini wife of Rana Ratan Singh who was killed in the battle in 1303 AD, and later by Rani Karnavati in 1537 AD.

The fort of Chittor is regarded as one of the most outstanding forts of the country and is indeed the 'Pride of Rajasthan State'. The formidable fort is perched atop a 180 m high hillock covering a massive area of 700 acres and is reminiscent of Rajput valour, pride, sacrifice, and loyalty. It has a circumference of 13 km, with a maximum length of 5 km. The fort is accessible through seven huge gates (Pols) that are comprised of strong iron spikes and served as watchtowers in earlier times. These gates are called, from the base to the hilltop, the Paidal Pol, Bhairon Pol, Hanuman Pol, Ganesh Pol, Jorla Pol, Laxman Pol, and Ram Pol, the final and main gate.

Considered among the Chittorgarh places to visit, the fort complex comprises 65 historic structures, among them 4 palace complexes, 19 main temples, 4 memorials, and 20 functional water bodies. Of these, Rana Kumbha Palace and Padmini's Palace are the wonders of Rajput architecture. Fateh Prakash Palace is a magnificent double-storeyed palace that was built by Maharaja Fateh Singh. This palace is a grand specimen of modern Indian architecture and at present houses a museum. The other two major attractions of the fort are the two towers, Vijay Stambh and Kirti Stambh. The towers are illuminated in the evening and it looks much more beautiful. Gaumukh reservoir is a huge water tank that gets water from Cow's mouth-shaped rock.

The Fort also comprises several Hindu temples including Samadhiswara Temple, Kalika Mata Temple, Neelkanth Mahadev Temple, Meerabai Temple, and Kumbha Shyam Temple. Built by Raja Manbhanga in the 8th century AD, Kalika Mata Temple was originally dedicated to Surya, which is evident from the image of Surya carved in the center of the doorjamb of the sanctum. It consists of a garbhagriha, antarala, a closed mandapa, and a porch. Dedicated to Lord Shiva, Samadhiswara Temple was built by Bhoja Parmar in the early 11th century AD and was renovated by Mokal in 1428 AD. The hillfort also contains Jain temples, such as Sattaees Devari, Shringar Chauri, and Sat Bis Devari.

Trek to the fort is steep and also the places within the fort are situated at some distance from each other, hence visitors would not be able to cover them all on foot. It is better to rent a bike or hire an auto/cab to explore all the places inside the fort and it takes 4 hours.