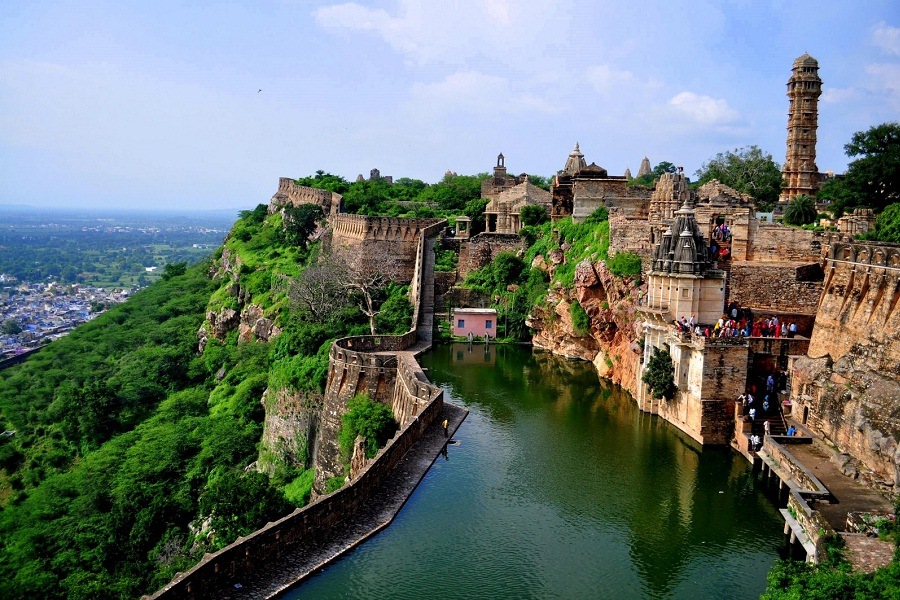 At a distance of 117 km from Udaipur, 175 km from Kota, 199 km from Ajmer, 313 km from Jaipur and 319 km from Jodhpur, Chittorgarh or Chittaurgarh is a historical city and municipality located on the banks of river Gambhiri and Berach in Rajasthan, India. It is one of the top heritage places in India, and among the famous Rajasthan tourist places for history buffs.

Chittorgarh is the administrative headquarters of Chittorgarh district and the former capital of the Sisodia dynasty of Mewar. It can be visited along with Udaipur tour packages. The history of Chittorgarh holds an important place in Indian history and is brimming with heroic tales of the great Rajput warriors. Also known as Chittor, Chittorgarh was built by the Maurya dynasty in the 7th century AD. It was then known as Chitrakut after Chitrangada Mori, a Rajput chieftain as written on historical Mewari silver coins. According to history, the Mori dynasty was in possession of the fort when Bappa Rawal the founder of the kingdom of Mewar seized Chittorgarh and made it his capital in 734 AD. Another account says that Bappa Rawal received it as a part of the dowry after marriage with the last Solanki princess in the mid-8th century AD. After that, his descendants ruled Mewar, which stretched from Gujarat to Ajmer, until the 16th century AD.

Chittorgarh was one of the most contested seats of power in India with probably some of the most glorious battles being fought over its possession. It is famous in the history of the Mewar dynasty as its first capital, and renowned in India's long struggle for freedom. With only brief interruptions, the fort has always remained in possession of the Sisodias of the Guhilot clan of Rajputs, who descended from Bappa Rawal. It is one of the best historical places to visit near Udaipur.

Chittorgarh is mainly known for its beautiful forts and temples. The Chittorgarh Fort is one of the largest forts in India and among the prime places to visit as part of Chittorgarh tour packages. The fort houses 4 palace complexes, 19 main temples, 4 memorials, and 20 functional water bodies. Kirti Stambh, Padmini's Palace, Rana Kumbha Palace, Vijaya Stambh, Gaumukh Reservoir, Kalika Mata Temple, Meera Temple, Shyam Temple are some of the prominent places to visit in Chittorgarh.

Gangur and Jauhar are the popular festivals celebrated in Chittorgarh, followed by other festivals like Diwali and Holi. Rajasthan is known to be a haven for shoppers and so is Chittorgarh. Tourists can buy a variety of tie and dye fabrics, silver jewellery, metalwork, and shoes from markets such as Rana Sanga Market, Fort Road, and Sardar Bazaar.

The best time to visit Chittorgarh is from October to March while the peak season is from December to February. The summer months are extremely hot and therefore, people avoid visiting the place during this time.

How to Reach Chittorgarh - Full Details

Top 10 Places to Visit in Chittorgarh

#1 of 9 Places to Visit in Chittorgarh


At a distance of 7 km from Chittorgarh Railway Station, Chittorgarh Fort is an ancient hill fort situated in the Chittorgarh town of Rajasthan. It one of the forts in India, and among the top heritage places in Rajasthan.

Chittorgarh Fort is a World Heritage Site included in hill forts of Rajasthan. The original Chittorgarh Fort was built by the Maurya dynasty in the 7th century AD. It was then known as Chitrakut after Chitrangada Mori, a Rajput chieftain as written on historical Mewari silver coins. According to history, the Mori dynasty was in possession of the fort when Bappa Rawal, the founder of the kingdom of Mewar, seized Chittorgarh and made it his capital in 734 AD. After that, his descendants ruled Mewar, which stretched from Gujarat to Ajmer, until the 16th century AD.

#2 of 9 Places to Visit in Chittorgarh

At a distance of 6 km from Chittorgarh Railway Station, Rana Kumbha is a heritage palace situated near Vijay Stambh inside the Chittorgarh Fort Complex. It is one of the top places to visit in Chittorgarh Fort.

The palace was rebuilt by Maharana Kumbha on a ruined palace which was built in the 734 AD by Bappa Rawal. He was known for his art and cultural patronages in Rajasthan's Mewar dynasty. It is in this palace the Rajput King Maharana Kumbha lived his royal life. The ruined Kumbha Palace is the most massive monument in the fort of Chittor.

According to the legends, the founder of the city of Udaipur, Maharana Udai Singh was born here, and his life was saved by his wet nurse Panna Dhai, who sacrificed her own son and successfully managed to take a young Udai Singh to a safe destination. This place was once the home of the famous bhakti poetess Meerabai. The palace is believed to have underground cellars where Rani Padmini and other women folks in the royal palace performed .....

#3 of 9 Places to Visit in Chittorgarh

At a distance of 800 m from Kumbha Palace and 7.5 km from Chittorgarh Railway Station, Kirti Stambh or the Tower of Fame is an ancient Jain monument situated inside Chittorgarh Fort Complex.

Kirti Stambh is a 12th century tower built by a Jain merchant Jijaji Bhagerwala during the reign of Rawal Kumar Singh. The main purpose behind its commission was to glorify Jainism. This six storied tower having a height of 22 m is dedicated to Adinath, the first Jaina Thirthankara.

Built in Solanki style architecture, it has many columned balconies, latticed arches and intricately carved niches. The tower is embellished with numerous figures of naked Thirthankars indicating that it belonged to the Digambara sect. In the lower storey, images of standing Adinatha are depicted on all the four cardinal directions whereas upper storeys contain hundreds of miniature images of Jain divinities. A number of Jain inscriptions can be found within and outside the tower, dating it to 896 AD.

#4 of 9 Places to Visit in Chittorgarh

At a distance of 8 km from Chittorgarh Railway Station, Fateh Prakash Palace is situated near Rana Kumbha Palace and close to the Badi Pol inside Chittorgarh Fort Complex. It is one of the must include places in Chittorgarh tour.

Fateh Prakash Palace was built by Rana Fateh Singh and has been named after him. This magnificent double-storeyed palace is a grand specimen of modern Indian architecture. This is an edifice with a tower on each of its four corners crowned by domed chhatris. The palace illustrates the maharaja's inclination towards art and is famous for the pillars and corridors. During the year 1968, a big portion of the palace was converted into a public museum.

The museum is divided into sections dedicated to different antiquity such as coins, art, weapons, tribal life, and wood crafts of the Bassi village. A large collection of sculptures and the majority of the deities is harbored within this museum. Among .....

#5 of 9 Places to Visit in Chittorgarh

At a distance of 600 m from Kumbha Palace and 8 km from Chittorgarh Railway Station, Vijay Stambh or Victory Tower is an imposing historical monument located in Chittorgarh Fort of Rajasthan, India. This is one of the best places to visit in Chittorgarh.

The magnificent Vijaya Stambh was built by Mewar king Maharana Kumbha in 1448 AD to commemorate his victory over the combined armies of Malwa and Gujarat led by Mahmud Khilji. Dedicated to Lord Vishnu, Vijay Stambh is a 9 story tower with a height of 37.19 m. Made with red sand stone and white marble, this tower has a balcony in each stories. An inscription in the uppermost storey giving detailed chronological account of life and achievements of rulers of Chittaur was taken up by Rana Kumbha's court scholar Atri and was later completed by his son Mahesh.

#6 of 9 Places to Visit in Chittorgarh

Kumbha Shyam Temple was built by Rana Kumbha in 1448 AD. The temple is dedicated to Varaha, an incarnation of Lord Vishnu. Though there is also a Kali Mata temple and Meerabai Temple in the same premise but the Kumbha Shyam temple is dominating in size. This temple is the place where Meera used to worship Lord Krishna, and the Bhakti movement originated at this place.

The temple built in Indo-Aryan style presents a compact architecture. The temple has a unique pyramid-like roof with a high tower. The temple is placed on an elevated plinth. The temple has an open pradakshinapath, ardha-mandapa, main mandapa, antarala and garbhagriha. .....

#7 of 9 Places to Visit in Chittorgarh

At a distance of 1 km from Rana Kumbha Palace and 6 km from Chittorgarh Railway Station, Ratan Singh Palace or Ratan Singh Mahal is a large historical palace situated in Chittorgarh Fort. Located along the Ratneshwar Talab, this palace is one of the top places to visit in Chittorgarh.

The Ratan Singh Palace is attributed to Rana Ratan Singh II (AD 1528 - 31). It is rectangular on plan and enclosed by a high wall. The main entrance is facing east through a lofty arch crowned with two pillared chhatris. The palace comprises a courtyard surrounded by rooms and a pavilion with balcony on the eastern part of the second storey.

In the north side of palace, there is a gate which leads to internal part of palace. In inner part, there is big empty space and around it different old structures and rooms are made. Darikhana has with fine balcony overlooking the reservoir is on eastern part of second story. A temple known as Ratneshwar Mahadeva Temple is on the north of the main gateway, .....

#8 of 9 Places to Visit in Chittorgarh

Padmini Palace was once the palatial abode of the exquisitely beautiful Rajput queen, Rani Padmini, the wife of King Rawal Ratan Singh. Revered as an epitome of beauty, Rani Padmini was the daughter of a Sinhala ruler Gandharvasen and plays a crucial role in the history of the gallant Rajput warriors. This queen was mentioned in the epic poem of 'Padmavati', which had been composed during 1540 CE, by Malik Muhammad Jayasi.

Rani Padmini Palace leaves behind the tincture of beauty, valour, sacrifice, honour, and tragedy of the past. Padmini Palace was the very legendary palace from where Ala-ud-din Khilji was permitted to obtain a glimpse of Padmini in a .....

#9 of 9 Places to Visit in Chittorgarh

At a distance of 249 km from Ahmedabad, 399 km from Jaipur, 656 km from Delhi, 642 km from Agra, and 772 km from Mumbai, Udaipur is a historical city and also the administrative headquarters of the Udaipur district in the Indian state of Rajasthan. It is one of the top tourist places in Rajasthan and among the must include destinations in honeymoon tour packages.

The city has an abundance of natural beauty, mesmerizing temples, and breathtaking architecture which are the prime attractions of Udaipur tour packages. Udaipur is also referred to as the 'Venice of the East' and the 'City of Lakes'. Udaipur was the historic capital of the former kingdom of Mewar in Rajputana. Maharana Udai Singh of the Sisodia clan of Rajput founded the city in 1559 AD and shifted his capital from Chittorgarh to Udaipur. It remained as the capital city .....