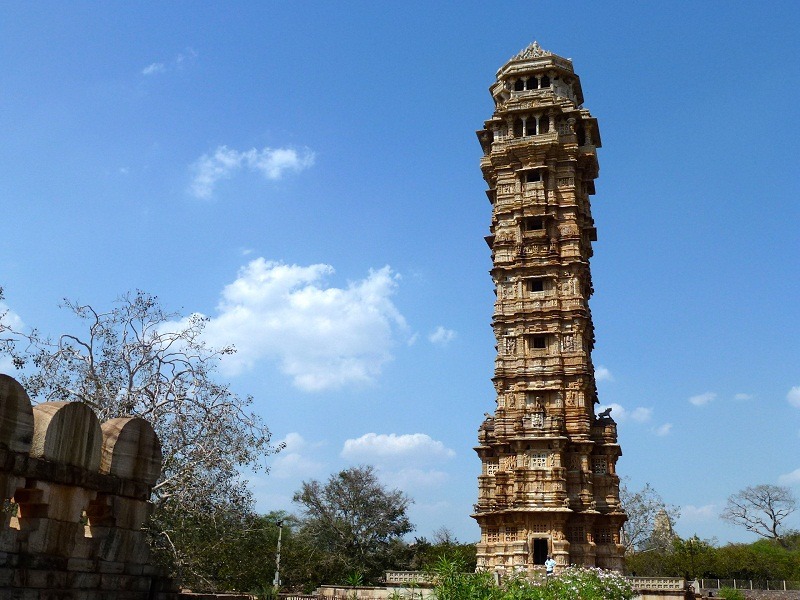 #5 of 9 Places to Visit in Chittorgarh

At a distance of 600 m from Kumbha Palace and 8 km from Chittorgarh Railway Station, Vijay Stambh or Victory Tower is an imposing historical monument located in Chittorgarh Fort of Rajasthan, India. This is one of the best places to visit in Chittorgarh.

The magnificent Vijaya Stambh was built by Mewar king Maharana Kumbha in 1448 AD to commemorate his victory over the combined armies of Malwa and Gujarat led by Mahmud Khilji. Dedicated to Lord Vishnu, Vijay Stambh is a 9 story tower with a height of 37.19 m. Made with red sand stone and white marble, this tower has a balcony in each stories. An inscription in the uppermost storey giving detailed chronological account of life and achievements of rulers of Chittaur was taken up by Rana Kumbha's court scholar Atri and was later completed by his son Mahesh.

Vijay Stambh built in Rajput style is covered with architectural ornaments, images of Gods and Goddesses, seasons, musical instruments and weapons. Intricate sculptures can be seen on the tower depicting the stories from Ramayana and Mahabharata. The tower is a remarkable example of religious pluralism practiced by the Rajputs. The topmost storey features an image of the Jain Goddess, Padmavati. Rana Kumbha also had the word Allah carved in Arabic nine times in the third storey and eight times in the eighth. This tower also has the portrait of Jaita, architect of this tower with his 3 sons - Napa, Puja and Poma in the 5th floor.

There are around 157 narrow steps leading to the terrace where the balconies give a beautiful top angle view of the whole town. When illuminated in the evening, the tower reflects a mesmerizing effect and the view is worth capturing.