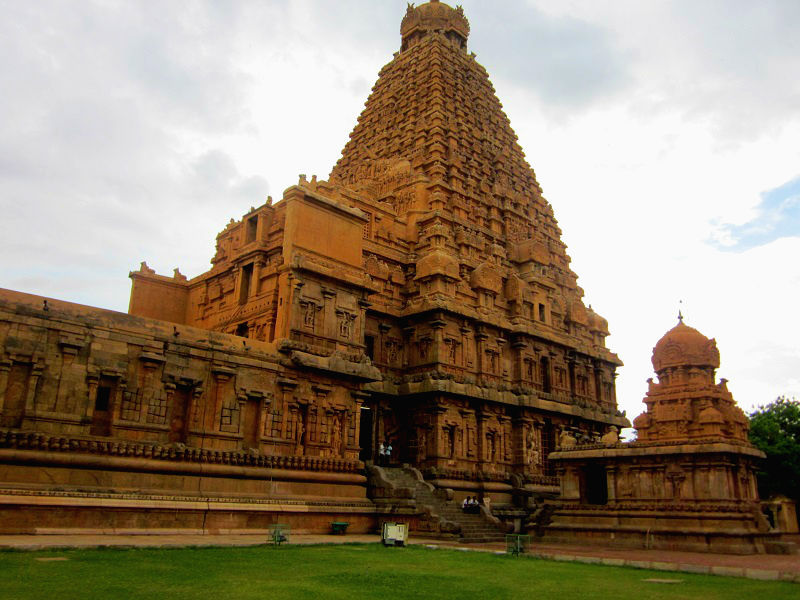 #1 of 22 Places to Visit in Thanjavur

At a distance of 2 km from Thanjavur Junction Railway Station & 5 km from New Bus Station, the Brihadeeswarar Temple is ancient Hindu temple located at Thanjavur, Tamilnadu. It is one of the famous heritage places to visit in Tamilnadu, and among the must include places in Thanjavur packages.

Also known as Peruvudaiyar Kovil or Periya Kovil, the Brihadeeswarar Temple is a brilliant example of the major heights achieved by Cholas in temple architecture. It was built in the year 1010 AD by the mighty Chola Emperor Raja Raja Chola I. It remains one of the greatest glories of Indian architecture and also one of the best places to visit in Thanjavur. The temple is part of the UNESCO World Heritage Site known as 'Great Living Chola Temples'.

Also known as The Big Temple, Brihadeeswarar Temple is dedicated to Lord Shiva and is famous for its grandeur and beautiful sculptures. The temple consists of an entrance tower followed by the main temple complex spread on a plot of 33,000 sq. ft. The inner part of the temple starts with a large Nandi mandapa which is a 12-foot tall monolithic idol with intricately carved Nandi Mandapa. The main shrine of Brihadeeswarar boasts an amazing structure with a large mandapa followed by an antarala and the sanctum. The 13-tier tower over the sanctum is the prime attraction of the temple which is 216 feet in height built in Dravidian style. The vimana boasts a massive which weighs 80 tons. It is said that a 2 km long ramp was built to carry the Sikhara and place it on the peak. The shadow of Sikhara never falls on the ground.

Unlike other Hindu temples, the temple tower at the entrance is considerably smaller than the vimana over the sanctum. The inner walls of the maha mandapa of the temple used to have beautiful mural paintings which faded away due to neglect. Some of these murals are places in the museum towards the southern corridor of the temple. Certain parts of the Chola paintings on the circumambulatory passage walls had been badly damaged. The Tanjore Nayak kings replaced them with a few paintings of their own, about 400 years ago. The outer wall of the upper story is carved with 108 dance postures of Bharathanatyam, the classical dance of Tamil Nadu.

The inner walls of the temple are surrounded by large corridors providing shelter to several small shrines. The upper part of the outer wall is accompanied by several hundred bull statues. The main entrance is facing east and there are two exits from antarala towards north and south. There complex also houses the shrines of Brihan Nayaki temple (built by Pandyas), Subrahmanya Temple (Vijayanagara period), Vinayaka Temple (by Maratha rulers). Thanjavur Nayaks also made several additions to the shrine.

The entire temple structure is made out of hard sandstone hardly available in the Thanjavur area where the temple is located. Mahashivaratri (Feb/Mar), Navaratri (Sep/Oct) and Rajarajan Festival (Nov/Dec) are important festivals celebrated in the temple.