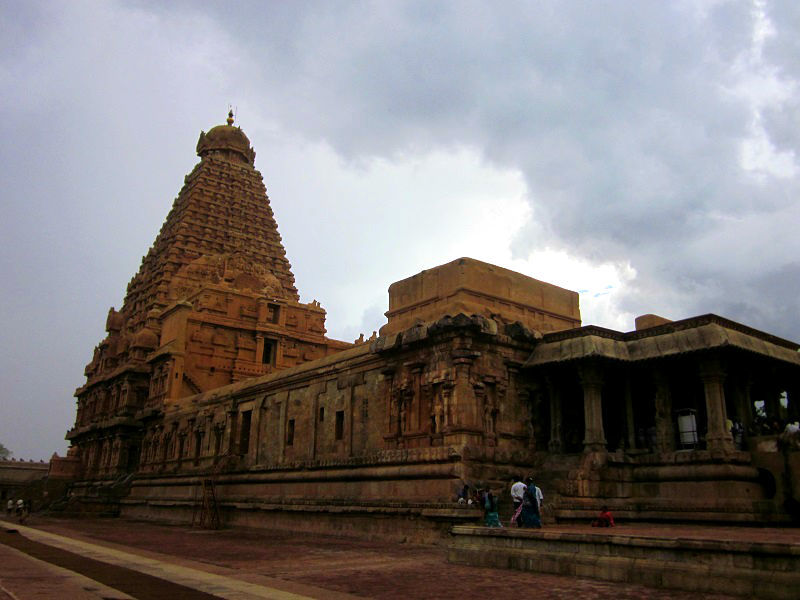 Peak Season: December to February & May to June

At a distance of 56 km from Trichy, 112 km from Chidambaram, 86 km from Nagapattinam, 170 km from Madurai, 326 km from Chennai, Thanjavur, also known as Tanjore, is a city and district headquarters in the state of Tamil Nadu. Thanjavur is famous for the Brihadeeswarar Temple built by Rajaraja Chola in the year 1010 AD. Also known as the Big Temple, it is one of UNESCO World Heritage Sites in India and also one of the popular places to experince Tamilnadu Tourism.

Situated on the banks of River Cauvery, Thanjavur has a rich historical heritage and is a must visit place in Thanjavur as part of Tamilnadu tour. The city was once the stronghold of the historic Cholas and at one time was also the capital of the Cholas, Mutharayars and Marathas when they were at the peak of their power. Since then, Thanjavur has been one of the chief political, cultural and religious centers of South India.

Thanjavur became the most important city in the Chola Empire and remained its capital till the emergence of Gangaikonda Cholapuram in about 1025. During the first decade of the eleventh century, the Chola king Raja Raja Chola I (985-1014) constructed the Brihadeeswarar Temple. The temple is considered to be one of the best specimens of South Indian temple architecture.

Thanjavur is one of the older cities in Tamil Nadu and has a lot of significance in Dravidian history. Thanjavur was eventually annexed along with the rest of the Chola kingdom by the Pandya king Maravarman Kulasekara Pandyan I in 1279. Later it went into the hands of Delhi Sultanate from whom Vijayanagara rulers have conquered. It was governed by Thanjavur Nayaks under Vijayanagara suzerainty. Thanjavur was successfully conquered by Ekoji I in 1674, the Maratha feudatory of the Nawab of Bijapur and half-brother of Shivaji. Ekoji founded the Thanjavur Maratha kingdom which ruled Thanjavur till 1855. The kingdom was eventually absorbed into British India in 1855 by the Doctrine of Lapse when Shivaji II (1832-55), the last Thanjavur Maratha ruler, died without a male heir.

It usually takes a full day to visit the places within Thanjavur town. Thanjavur is also famous for metal sculptures moulded with great facial expressions and beautiful finish.

How to Reach Thanjavur - Full Details

Top 10 Places to Visit in Thanjavur

#1 of 22 Places to Visit in Thanjavur

At a distance of 2 km from Thanjavur Junction Railway Station & 5 km from New Bus Station, the Brihadeeswarar Temple, also known as Peruvudaiyar Kovil or Periya Kovil is a brilliant example of the major heights achieved by Cholas in temple architecture. It was built in the year 1010 AD by the mighty Chola Emperor Raja Raja Chola I. It remains as one of the greatest glories of Indian architecture and also one of the best places to visit in Thanjavur. The temple is part of the UNESCO World Heritage Site known as 'Great Living Chola Temples'.

Also known as The Big Temple, Brihadeeswarar temple, dedicated to Lord Shiva, is famous for its grandeur and beautiful sculptures. The temple consists of an entrance tower followed by the main temple complex spread on a plot of 33,000 sq. ft. The inner part of the temple starts with a large Nandi mandapa which is a 12 .....

#2 of 22 Places to Visit in Thanjavur

At a distance of 2 km from Thanjavur Railway Station, 1.5 km from Brihadeeswarar Temple & 0.5 km from Old Bus Station, Thanjavur Palace, also known as Maratha Palace or Nayak Palace is a wonderful historical structure in the town of Thanjavur. It was the official residence of the Maratha rulers from 1674 to 1855.

It was constructed partly by Thanjavur Nayaks around 1550 CE, and expanded by the Marathas. The palace is noted for its huge halls, spacious corridors, observation and arsenal towers, and a shady courtyard. The Palace is a must visit place in Thanjavur to understand the history and lifestyle of its rulers.

The entrance to the palace is a large quadrangular courtyard which is encircled by walls with big gateways to the north and the east. The courtyard leads to a many-pillared hall. The Goodagopuram, also known as Bell Tower, an eight storied vimana like building situated on the southern side of the third quadrangle, has a height of 190 ft. It was the palace watch tower .....

#3 of 22 Places to Visit in Thanjavur

At a distance of 35 km from Mayiladuthurai, 43 km from Thanjavur, 54 km from Karaikal, 65 km from Nagapattinam, 72 km from Chidambaram, 105 km from Trichy, 129 km from Pondicherry, 235 km from Madurai and 282 km from Chennai, Kumbakonam is one of the ancient temple town located amidst the two rivers Cauvery and Arasalar in Thanjavur district of Tamil Nadu. Kumbakonam is one of the top places to visit in Tamilnadu and among the popular places to visit near Chennai.

The name Kumbakonam in English means the Pot's Corner. In olden days it was called Thirukudamookku and it is also popularly called as Kudanthai now. According to history, Kumbakonam dates back to the Sangam period and was ruled by the Early Cholas, Pallavas, Medieval Cholas, Later Cholas, Pandyas, the Vijayanagar Kings, Madurai Nayaks, Thanjavur Nayaks and the Thanjavur Marathas. It rose to be a prominent city between the 7th .....

#4 of 22 Places to Visit in Thanjavur

At a distance of 12 km from Thanjavur and 35 km from Kumbakonam, Thirukandiyur is a temple town situated in Tamilnadu. The major attraction of Thirukandiyur is the Temple of Hara Sapavimochana Kandeswarar. The temple of Thirukandiyur is considered one of the 108 Divyadesams and is also known as Pancha Kamala Kshetram. As per history, the temple was built by Emperor Mahabali and is located between Kudamurutti and Vennar Rivers.

According to a legend, Brahma became very arrogant and feet superior to Shiva. Brahma once visited Kailas to meet Shiva. Parvathi, the wife of Shiva got confused and performed pooja to Brahma instead of Shiva. Lord Shiva plucked off one head of Brahma to avoid the confusion between the two. This resulted in Shiva incurring a Brahmahathya dosha. The skull of Brahma stuck to the hands of Shiva which he could not separate despite all efforts. All the food offered to him was consumed by the skull and it was never .....

#5 of 22 Places to Visit in Thanjavur

At a distance of 13 kms from Thanjavur & 312 Kms from Chennai, Thiruvaiyaru in Thanjavur district is situated on the banks of the river Kaveri. Thiruvaaiyaru has an old Shiva temple dedicated to Panchanatheeswar. However, it's more famous for association with Thyagaraja, the Saint Composer,

The Panchanatheesvarar Temple dedicated to Shiva sprawls over a 14-acre campus and is both grand and serene. Beyond the temple are lush paddy fields and groves. The temple is about 1 Km from Thiruvaiyaru town centre. Timings - 6 AM to 12 PM and 4-9 PM.

Thyagaraja is a composer of Carnatic music, who along with his contemporaries Muthuswami Dikshitar and Syama Sastri forms the Trinity of Carnatic. He composed hundreds of devotional songs, most of them in praise of the Hindu god Rama in Telugu language.

Near the Shiva temple is the one-roomed house where Tyagaraja composed some of his greatest works. On the banks of river is the samadhi of the saint where music festival takes place .....

#6 of 22 Places to Visit in Thanjavur

At a distance of 2 km from Thiruvarur Junction, 40 km from Kumbakonam, 39 km from Karaikal and 62 km from Thanjavur, Thiruvarur is a famous temple town known for Sri Thyagaraja Temple is a Hindu temple, dedicated to Lord Shiva. This is the fore most form of the Saptha Vidanga Sthalams.

Sri Vanmikanathar (Lord Shiva) is the presiding deity of the temple. According to the legend, Vishnu worshipped Shiva in the form of Somaskanda, associated with Ajapa dance. Shiva is said to have appeared in an anthill to Vishnu. So, no abishekam is performed for Vanmikanathar. Daily poojas are offered to a small idol referred .....

#7 of 22 Places to Visit in Thanjavur

At a distance of 1 km from Velankanni Railway Station, 31 km from Karaikal, 93 km from Thanjavur, 11 km from Nagapattinam, 161 km from Pondicherry and 313 km from Chennai, The Basilica of Our Lady of Good Health is located in Velankanni town of Tamil Nadu. The Roman Catholic Latin Rite Basilica is devoted to Our Lady of Good Health. Situated on the coast of Bay of Bengal, this is one of the most popular Christian pilgrimage sites in South India.

The Shrine of Our Lady of Velankanni is one of the most frequented religious sites in India. It can be traced back to mid-16th century and is attributed to three miracles at different sites around where the Basilica currently stands. The appearance of Mary and Christ Child to a shepherd boy, the curing of a buttermilk vendor and the rescue of Portuguese sailors from a violent sea storm are the miracles associated with this shrine.

The shrine was started as a small structure in the .....

#8 of 22 Places to Visit in Thanjavur

At a distance of 14 km from Karaikal, 85 Kms from Thanjavur, 9 Kms from Nagapattinam & 291 Kms from Chennai, Nagore is famous for a Muslim dargah dedicated to the 16th century saint Meeran Sahib.

The Nagore Dargah shrines are situated at three locations, Nagore, Vanjur and Silladi. The main campus is at Nagore, spread over an area of about five acres, which is enclosed by compound wall, with four impressive entrances, one each on the north, south, east and west. In front of the western gate, just outside the compound, is a large tower, 131 feet tall, called 'Periya Minara'. Nagore Dargah literature discloses that Tanjore King Pratap Singh built -Periya Minara- around 1760 AD, about 200 years after the death of Meeran Sahib. He is said to have built it in appreciation of having received the grace of Meeran Sahib.

Although this is a Muslim religious place, the dargah's rituals and architecture are influenced by Hinduism. Kandhuri .....

#9 of 22 Places to Visit in Thanjavur

At a distance of 106 Kms from Thanjavur and 47 Kms from Nagapattinam (which is 85 Kms from Thanjavur), Vedaranyam, located near Point Calimere is famous for Vedaranyeswarar temple dedicated to Shiva. The goddess is Vedanayaki and Veenavada vibhooshini. It is said that Parvati is supposed to have defeated Sarawati in the tuning of the Veena at this place.

It is said that during the deluge the Vedas along with the puranas, agamas, smritis and sastra took shelter under this linga and were protected. After the deluge the four Vedas along with the puranas worshipped the linga after bathing in a tank made by them. When Siva appeared, the Vedas requested Siva to let them stay there as trees and plants and others and the place are known as Vedaranyam. The tank that they had built be known as Vedamrita.

This is the only Shiv temple which has the Lord Shiv and Parvati in their whole wedding costume. The temple has fine paintings and sculptural work done on it.

Stretching across an area of 21.47 sq. kms, it is surrounded by the sea and mesmerizing beaches. This sanctuary is famous for the migratory birds like flamingos, water fowl, etc, which arrive here every winter. The park is also home for Wildlife like chital, wild boar, bonnet macaque, Painted stork, black buck, terns, plovers and stilts. Dolphins and turtles can also be observed near the shore.