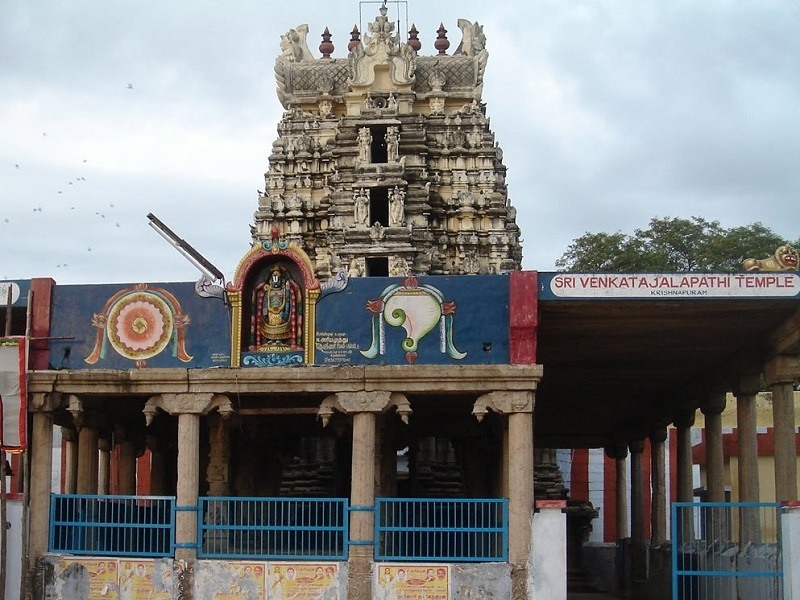 #13 of 23 Places to Visit in Tirunelveli

At a distance of 13 km from Tirunelveli, Venkatachalapathy Temple is a Hindu temple situated at Krishnapuram village in Tirunelveli district of Tamilnadu. Popularly called as Krishnapuram Temple, this is one of the best pilgrimage places to visit in Tirunelveli.

The temple is dedicated to Lord Vishnu. According to the inscriptions in the temple, the temple was built by Krishnappa Nayak (1563-72), the son of Viswanatha Nayak, the founder of Madurai Nayak dynasty. Krishnappa is attributed to the construction of the precincts around the temple and the soaring temple tower. The copper plates from Sadasiva Raya indicate grants to light lamps perpetually and lay gardens. The village was originally named Thiruvenkatapuram and got changed to Krishnapuram during the rule of Krishnappa Nayak.

Constructed in the Dravidian style of architecture, the temple occupies an area of 1.8 acres and is surrounded by a granite wall. The five tiered rajagopuram is 110 feet tall. The sanctum houses the image of Venkatachalapathy in standing posture with four arms. Two of his arms hold the Sankhu and Chakra, while the other two sport Abayamudra and Kadahasta. There are separate sannadhis for goddesses Sridevi and Bhudevi in the prakaram. There are lot of halls in the temple namely the Pandal Mandap, Vahana Mandap, Ranga Mandap and Jeeyar Mandap.

Krishnapuram temple sculptures are noted for their high workmanship and artistic skills throughout the world. The stone for carving out the idols has been selected with such care that they produce melodious musical sounds when struck at different places. On the northern side of the temple, there is a Veerappa Nayak Mandapam with two beautifully carved elephants at its entrance. Six pillars can be seen at the center of the mandapam which bear images of exquisite beauty depicting scenes from the puranas. They are so lively and their features and expressions so natural. The Jeeyar Mandap also houses lot of pillars with images of ladies holds lamps as in Kerala temples.

The 11 day Brahmotsavam in Purattasi (September-October) and Vaikunda Ekadasi in December-January are the major festivals celebrated in the temple with great pomp. The temple is maintained and administered by the Hindu Religious and Endowment Board of the Government of Tamil Nadu.