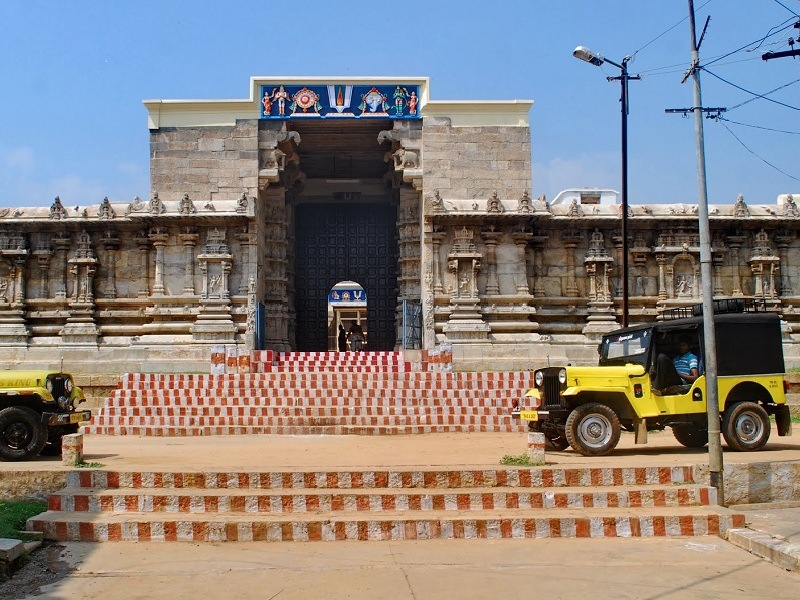 #15 of 23 Places to Visit in Tirunelveli

At a distance of 45 km from Nagercoil, 46 km from Tirunelveli and 49 km from Kanyakumari, Thirukkurungudi is a holy place for Hindus situated on the banks of Nambi River at the foot hills of Mahendragiri in Tamilnadu.

There are five Nambis in this Kshetram. They are Ninra Nambi (Standing posture), Irundha Nambi (Sitting posture), Kidandha Nambi (Sleeping posture), Thiruparkadal Nambi and Thirumalai Nambi. Of these, Ninra Nambi Temple is the main temple and is located in the center of the town flanked by four big Mada Veethis. The Nambi Rayar Temple or Thirukkurungudi Temple is 1300 years old. It is also called as Vaamana Kshetram and is one among the 108 divya desams of Lord Vishnu.

According to the legend, Goddess Bhudevi was abducted by the demon Hiranyaksha and hid her deep under the ocean. All the deities and sages prayed to Lord Vishnu to retrieve Mother Earth from the demon. Lord Vishnu transformed into a wild boar and plunged into deep under the ocean. Lord Varaha had fierce battle with Hiranyaksha and saved Mother Earth. After this glorious incident Lord Vishnu along with Goddess Bhudevi arrived on this sacred land. He passionately looked upon Goddess and shrunk his terrifying size into normal. Thus, this place has got in its name 'Thirukkurungudi'.

Covering an area of 18 acres, the temple has five prakarams, and is surrounded by a massive wall, crowned with a five tiered gopuram. The Vijayanagara rulers and the Nayaks of Madurai have made several endowments to this temple, which boasts of several exquisite sculptures. The presiding deity is called Ninra Nambi in standing posture. The festival idol is called Azhagiya Nambi or Sundara Paripurnan. The goddess goes by the name of Kurungudi Amman.

Kidandha Nambi and Irundha Nambi are situated to the left of Ninra Nambi. Thiruparkadal Nambi Temple is located very near to the River Nambiyaru. Thirumalai Nambi Temple is on the hills (Mahendragiri Mountain), which is about 8 km from the main temple. It is a small mountain where auto, two wheelers can be hired from the foot hill. There are few steps that will take to the temple entrance. There is a small waterfall which makes devotees fresh before going to the temple.