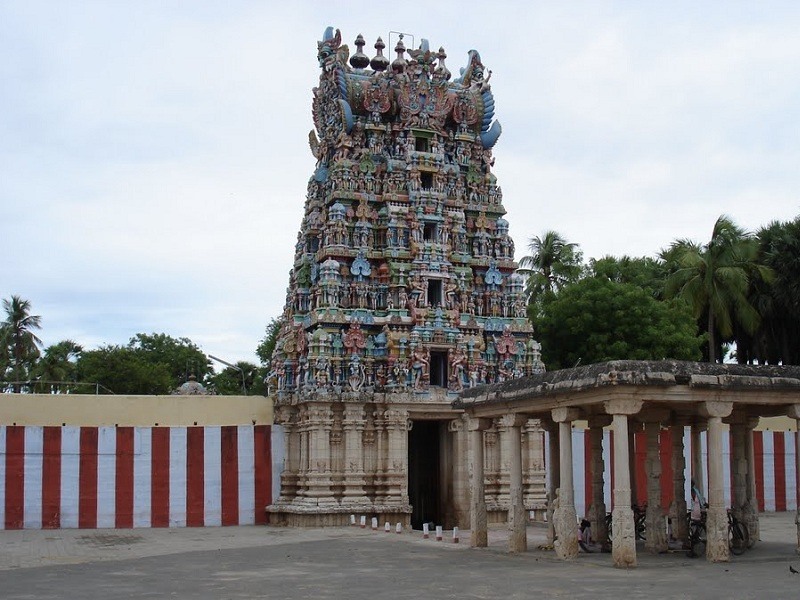 #17 of 23 Places to Visit in Tirunelveli

At a distance of 29 km from Tirunelveli and 39 km from Thoothukudi, Sri Vaikuntanatha Perumal Temple is an ancient temple situated at Srivaikuntam in Thoothukudi district of Tamilnadu. Located on the banks of the river Thamirabarani, this is one of the 108 divya desams of Lord Vishnu and the first of the Navatirupathis.

Also called Srivaikuntam Temple and Kallapiran Temple, Sri Vaikuntanatha Perumal Temple is dedicated to Lord Vishnu in the form of Vaikuntanathar. It is believed that this temple was used as a fort in the fight between the legendary freedom fighter Veerapandiya Kattabomman and the British in the 1800s. The temple is classified as a Navatirupathi, the nine temples revered by Nammazhwar located on the banks of Thamirabarani River. This is the first in the series of these nine Tirupathi Temples.

There are many legends associated with this temple. According to one legend, Somuka, a demon stole the four Vedas from Lord Brahma. Brahma was helpless and he did severe penance on the banks of Thamirabarani River seeking favour from Lord Vishnu. Pleased with the penance of Brahma, Vishnu agreed to help Brahma. Vishnu killed the demon and restored the Vedas to Brahma. Lord Vishnu set his abode as Srivaikuntam and resided there as Vaikuntanathar. Another story goes that the Lord, disguised as the thief, presented himself before the King to save the thief Kaaladhushakan, an ardent devotee of Lord Vishnu. Hence, the Lord here is also known as 'Kallapiran'.

The architecture of the temple is simply amazing and there are three prakarams in the temple. The temple gopuram is 110 feet in height and 500 feet in width. The sanctum houses the image of Sri Vaikuntanathar in standing posture with a mace in his hand. Adisesha, the serpent god, unfurls his hood over Vishnu. This is the only divya desam where Adisesha has his hood above the standing Lord. There are shrines to Krishna, Lakshmi Narasimha, Hanuman, and Tiruvenkatamudaiyar. The Tiruvenkatamudaiyar Mandapam is rich with sculptures of Yallis, Elephants and Warriors.

The temple is one of the Navagraha temples in Vaishnavism, associated with Surya, the Sun god. The unique feature of this temple is that the Sun's rays falls directly on Lord Vaikuntanathar on two days (on the 6th day of Chitrai (April-May) and Aipasi (October-November)) every year.

The Garuda Sevai festival is a spectacular event held in the month of Vaikasi (May-Jun) at this temple. During the festival, the festival idols from Navatirupathi temples are brought here on Garuda vahana.