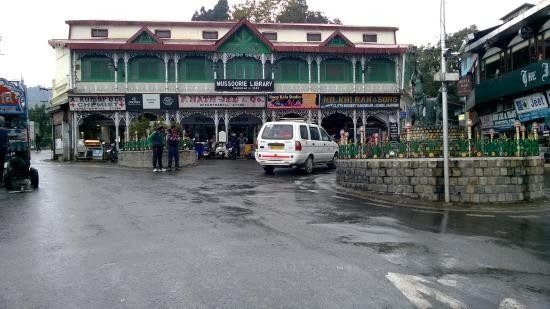 At a distance of 350 m from Library Bus Stand, Library Bazaar, also known as Gandhi Chowk, is located in close vicinity of old library in Mussoorie.

Library Bazaar is located strategically in Mussoorie's bustling Mall Road. The name of the bazaar is derived from the Victorian-style Library, which was constructed in mid-19th century. The market houses a statue of Mahatma Gandhi, and often called as Gandhi Chowk.

One of the prominent attractions of the place is the Band Stand, where tourists can enjoy song of the historic colonial days. The famous Savoy Hotel, which earlier housed the Maddock School, is an attraction here. The Criterion building next to the library was famous for its bar.

The Library bazaar is nestled between Laxmi Narayan temple, Gurudwara Singh Sabha, Amania mosque and Christ Church. The bazaar is arranged in a circular path and is dotted with many small shops and food stalls.