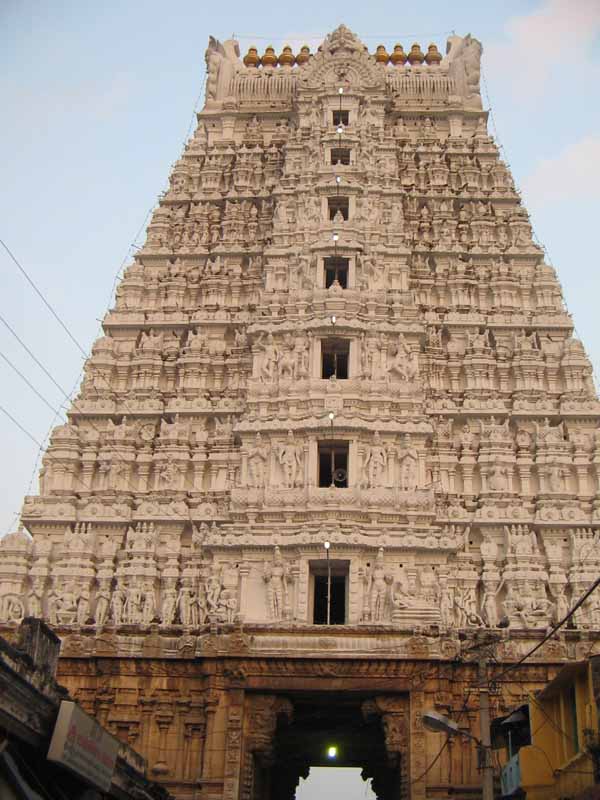 The original temple had Sri Parthasarathi as the main deity. Sri Ramanuja added the Sri Govindaraja deity in 1130 AD. Yadavaraya Dynasty made several gifts for decoration of the chariot and carrying necessary repairs of the temple. The temple came in for greater importance in 1506 AD during the rule of Vijayanagara Dynasty and from then onwards different rulers in a different way developed the temple.

This famous temple in Tirupathi is a remarkable achievement of the ancient south Indian architecture. It has an impressive outer gopura and an inner gopura. The inner most gopura is the earliest one, dating from the 14th century and has carvings that depict scenes from Ramayana and Lord Krishna's life. The temple has two main shrines dedicated to Lord Vishnu and Lord Krishna. The shrine to the north is Sri Govindaraja and the shrine to the south is Sri Parthasarathi (Lord Krishna). The idols of Rukmini and Satyabhama are also found here.

This is the biggest temple in Tirupati town and attracts lakhs of pilgrims. The abhisekhas are performed to a small idol as the main statue is said to have built using sand. This temple is managed by Tirumala Tirupati Devasthanm board.

The Bramhotsavam of Govindaraja Swamy during the month of May-June (Vaisakha) and annual Float festival held in February - March, attract a large number of devotees every year.