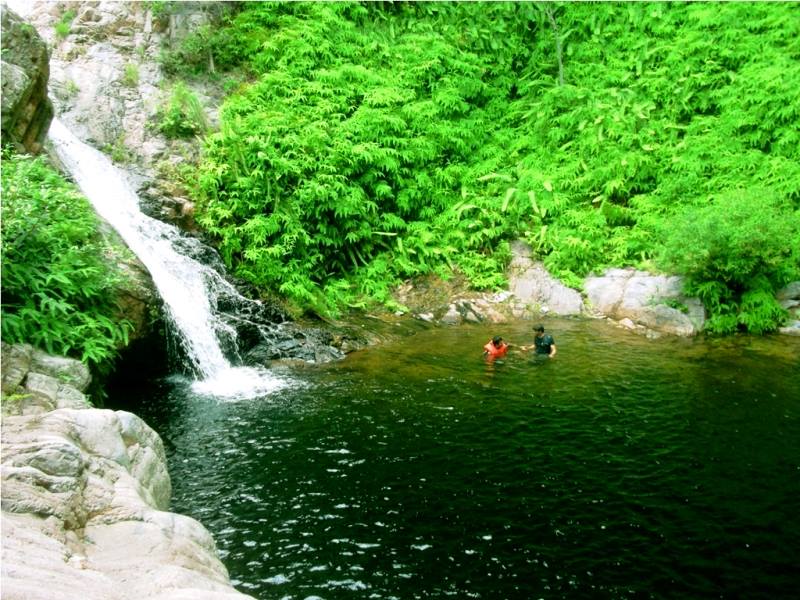 Travel Tips: There were several cases of Tourists missing in the forests of Nagalapuram. It is advisable to hire a local villager as guide from near by Kadivedu village

At a distance of 16 km from Nagalapuram town, 44 km from Puttur, 87 km from Chennai, 78 km from Tirupati, 107 km from Chittoor, 130 km from Vellore, 120 km from Kanipakam & 288 km from Bangalore, Nagalapuram is a small historical town located in the Chittoor District of Andhra Pradesh. Nagalapuram is famous for two things, one is Sri Vedanarayana Swamy Temple and the other one is Nagalapuram falls trekking (also known as Saddhi Koodu Madugu). This is one of the popular sites for trekking near Chennai and also among ideal weekend getaways around Chennai for a two day trip.

Sri Vedanarayana temple is grand shrine dedicated to Lord Vishnu and is said to have been built by Krishna Devaraya of Vijayanagar Empire in remembrance of his mother Nagala Devi, after whom the town is named. The temple reflects the Vijayanagara architectural and the main deity idol is facing west. The sanctum sanctorum has Vedanarayana Swamy with his consort's Sridevi and Bhoodevi on either side. Lord Vishnu is in Matsya Avatar, the first among the Dasavatar, who saved the four Vedas from Somakudu and returned to Brahma.

The large temple complex comprises of a grand entrance, tall gopura, wide corridors and beautiful central shrine with excellent carvings. The special feature of this temple is a festival called Surya Puja, celebrated annually for 3 days during the month of March. The temple architecture is done in such a way that during these three days, the sun rays fall on the main deity feet, navel and fore head. The incident is perceived as Lord Surya arriving to worship Lord Vishnu by touching his feet. This temple is managed by the TTD.

Nagalapuram Falls is a pristine beauty which offers lovely one-day trek from Chennai with a beautiful view of the waterfalls. Thrown in with some steep climbs for experienced trekkers along with easy climbs routes for starters, natural wilderness makes it a perfect blend for an ultimate experience.

The 12 km long trekking (two way) is usually a full day activity while some people camp at night. One way trek to the waterfall usually takes about 2 to 2.5 hours through rocky terrain and slippery path. Thick vegetation along the path provides natural shade which would be otherwise difficult to trek during hot sunny days. There are several water ponds mid way to the falls which are good spots for a short break. The main waterfall has a big pool at the bottom with crystal clear water. The center of the pool is believed to be about 40 feet deep and it's advised to be very careful while swimming.

The trekking starts from Kone Dam (6 km from the falls) which is about 2 km from a village called Kadivedu, 72 km from Tirupati & 10 km from Nagalapuram town.