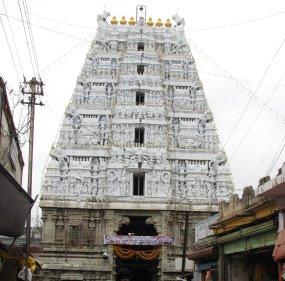 At a distance of 5 km from Tirupati Railway Station & 27 km from Tirumala Tirupati Balaji Temple, Tiruchanur also called as Alimelumangapuram is famous for Alimelu Manga Temple dedicated to goddess Padmavati, the consort of Lord Venkateswara. It is believed that pilgrimage to Tirumala is incomplete without a visit to Sri Padmavati Ammavari Temple at Tiruchanur.

According to ancient scripts, as Lord Venkateswara Temple at Tirumala was not easily accessible, a new temple called Tiruvalan Koil was constructed at Tiruchanur near Tirupathi to house Lord Venkateswara in 8th century by Pallavas. The temple was later dedicated to Padmavati Devi by Yadava Rayas in 12th century.

According to the legend, Lord Vishnu showed his reverence towards the sage Bhrigu, even though the sage had insulted Vishnu. In anger, Sri Maha Lakshmi immersed herself for 12 years here in pushkarini the banks of Swarnamukhi River and emerged from it in a Golden Lotus in the 13th year on Panchami day of Kartika month. The temple symbolizes reunion of Lord Venkateswara and Goddess Padmavathi.

The temple was built in Vijayanagara style and is made in white and gold around the southern banks of Swarnamukhi Pushkarini. The temple is an impressive structure with a Gopura, Mandapa and the sanctum. The presiding deity, Sri Padmavati Devi is seated in Padmasana holding a lotus. Tiruchanur also comprises Sri Krishna Temple, Sri Sundararaja Swamy Temple and Sri Suryanarayana Swamy Temple. It is a tradition to first worship Sri Krishna and then to take darshan of Sri Padmavati.

The Brahmotsavam of Goddess Padmavathi is celebrated during the month of Karthika Masam is the main festival here. The offerings to the goddess from Lord Venkateswara are brought to Tiruchanoor on a specially decorated elephant with great honor.

This place can be reached by Bus/Auto from Tirupati Bus Station. Only Hindus are allowed in the temple.