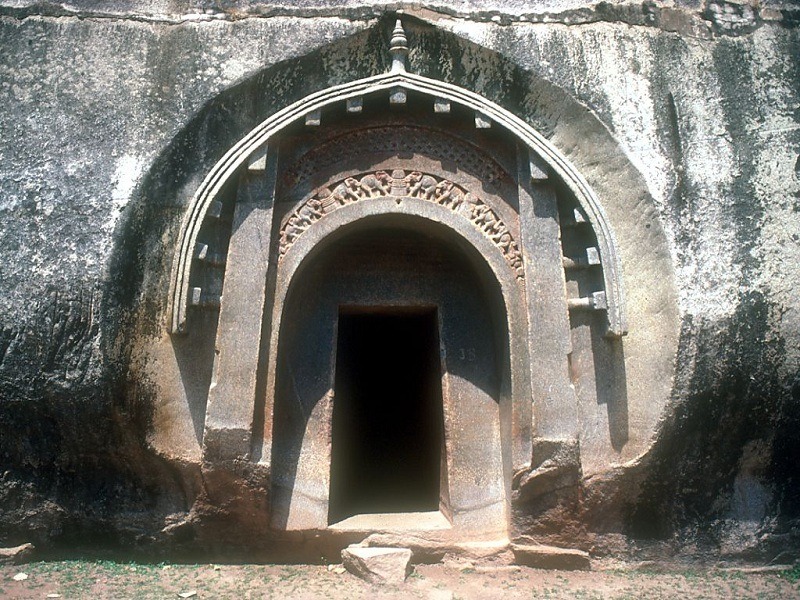 At a distance of 31 km from Gaya, and 42 km from Bodhgaya, Barabar Caves are the ancient Buddhist caves located at Barabar near Gaya in Bihar, India. These are the oldest surviving rock-cut caves in India, and among the most-visited places in Bodhgaya.

Situated on the twin hills of Barabar and Nagarjuni, Barabar Caves are a set of 7 rock-cut-caves dating back to the 3rd century BC, during the Maurya period. These rock-cut chambers bear dedicatory inscriptions which informs that the four caves on Barabar hill were assigned by King Ashoka to Ajivika monks in 261 BC. Another inscription on the Nagarjuni hill is of the grandson of King Ashoka, Dasaratha Maurya, which tells that the Ajivikas continued to enjoy imperial Mauryan patronage for long.

Out of the 7 caves, the Barabar Hill houses 4 caves and the Nagarjuni Hill is having 3 caves. Carved out of granite, the caves on Barabar Hill are named as Karna Chaupar, Lomas Rishi Cave, Sudama Cave, and Vishwamitra Cave. The cave of Lomas Rishi is probably the most famous of the caves of Barabar, because of its beautifully carved door. It is on the southern side of Barabar Hill and is adjacent to Sudama cave, which is on the left. Lomas Rishi consists of two rooms- a rectangular room, and a circular, semi-hemispherical room. The cave has an arch-like shape facade that imitates contemporary timber architecture. On the doorway, a row of elephants proceeds towards stupa emblems, along the curved architrave. This is the characteristic form of the 'Chaitya arch' or chandrashala, to be an important feature of architecture and sculpture in the rock for many centuries.

Located on the southern side of Barabar Hill, Sudama Cave is probably the first cave in the group to have been dug. This cave was dedicated to Ajivikas by Emperor Ashoka in 257 BCE. The ceiling of the Sudama cave is arched. The cave is composed of a circular vaulted chamber and a vaulted room with the rectangular mandapa. The cave has flat interior walls, and polished granite surfaces, creating a mirror effect. On the other hand, the plane surfaces reverberate the sound, creating a very pronounced echo phenomenon. All of Barabar caves share this interior polished appearance to a greater or lesser extent, except Lomas Rishi Cave, which, although designed on the same model, is only half-finished for its interior.

Karan Chaupar or Karna Chaupar is on the northern side of the Barabar Hill. It consists of a single rectangular room with polished surfaces. It contains an inscription of Ashoka dating from the 19th year of his reign, about 250 BCE, located outside, immediately to the right of the entrance. The cave was indeed dedicated to the Ajivikas. The cave has a rock-cut bench at one end and an inscription from the Gupta period mentions 'Daridra Kantara' ('The Cave of the Beggars') in the entrance hall. The Visvakarma Cave, also called Viswa Mitra, is accessible by the 'steps of Ashoka' carved into the cliff. A little east of the main granite hill, the cave consists of a rectangular room entirely open to the outside, a sort of elongated porch, and an unfinished semi-hemispherical room. The cave of Visvakarma was offered by Ashoka to the Ajivikas in the 12th year of his reign, about 261 BCE.

The nearby caves of Nagarjuni Hill were built a few decades later than the Barabar Caves and were consecrated by Dasaratha Maurya, Ashoka's grandson and successor, for the Ajivikas sect. The three caves are Gopi-ka-Kubha, Vadithi-ka-Kubha cave, and Vapiya-ka-Kubha cave. Also called Gopi or simply Nagarjuni, Gopi-ka-Kubha is the largest of all the caves of the Barabar complex. It consists of a single large oblong room. The cave lies on the south bank of the hill, dug by King Dasharatha, the grandson of Emperor Ashoka, according to the inscription that was engraved above the front door.

Vadathika Cave is located in a crevasse in the rock. It consists of a single rectangular room with a porch at the entrance. The cave also has a much later Hindu inscription, the Vadathika Cave Inscription. Vapiyaka Cave also called 'Well Cave', consists of a single rectangular room and was also dedicated to the Ajivikas sect by Dasharatha. This cave also has a beautiful vaulted hall, entirely made of perfectly polished granite. It has an inscription identical to its neighbor.