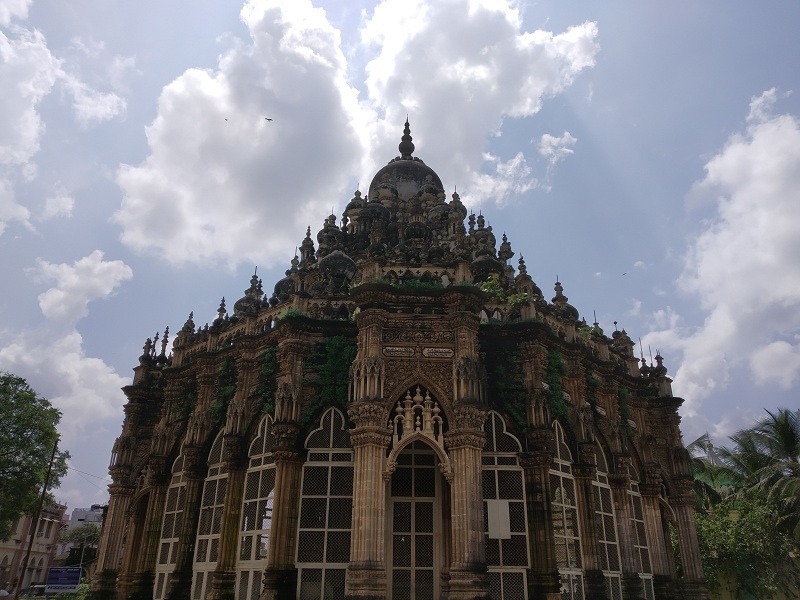 At a distance of 1 km from Junagadh Junction, Mahabat Maqbara is a mausoleum situated in Mullawada locality of Junagadh. Also called Mausoleum of Bahaduddinbhai Hasainbhai, it is one of the historical monuments in Gujarat and among the prime places to visit in Junagadh.

Often considered as the most imposing architectural monument in Junagadh, Mahabat Maqbara was originally the residential palace of Babi Nawabs. The construction of the palace was started by Mahabat Khanji in 1878 CE and was completed by his successor Bahadur Kanji in 1892 CE. The palace complex is now houses the tombs of Mahabat Khan II, the 6th Nawab of Junagadh and Bahaduddinbhai Hasainbhai, the minister of Nawab Rasul Khanji.

Both mausoleums at Mahabat Maqbara palace complex are the fine examples of art and architecture, typical of the late 19th century royal monuments of Junagadh. Mahabat Maqbara, the mausoleum of Mahabat Khan, is a fusion of Indo-Islamic, European and Gothic architecture and was built in 1982 CE by Bahadur Khan III for his father Mahabat Khan II. The most striking feature of the monuments is its floor-to-lintel French windows and the Gothic columns alongside silver inner doors. It also boasts of an intricate cluster of bulbous domes supported by columns built in Gothic style.

Standing on the left of the Mahabat Maqbara is the elaborately designed Bahauddin Maqbara, the tomb of Wazir Bahaduddinbhai Hasainbhai. It was constructed by Sheikh Bahauddin with his own funds during the period 1891-1896 AD. A sight to behold, the Bahauddin Maqbara resembles the Taj Mahal in structural design, with its bubbled domes and four minarets on the four corners with whirling spiral staircase. The minarets have rich stone carvings and large silver doors. A cautious climb up the narrow stairs gives an awe-inspiring view of the domes and other vintage buildings in the neighbourhood. There are also a number of Haveli's inside the Maqbara which have some best wooden carvings and jharokhas which resemble the Gujarat domestic architecture.

The Mahabat Maqbara is generally kept under lock and key, but can be glimpsed into by obtaining the keys from the mosque situated beside the mausoleum.