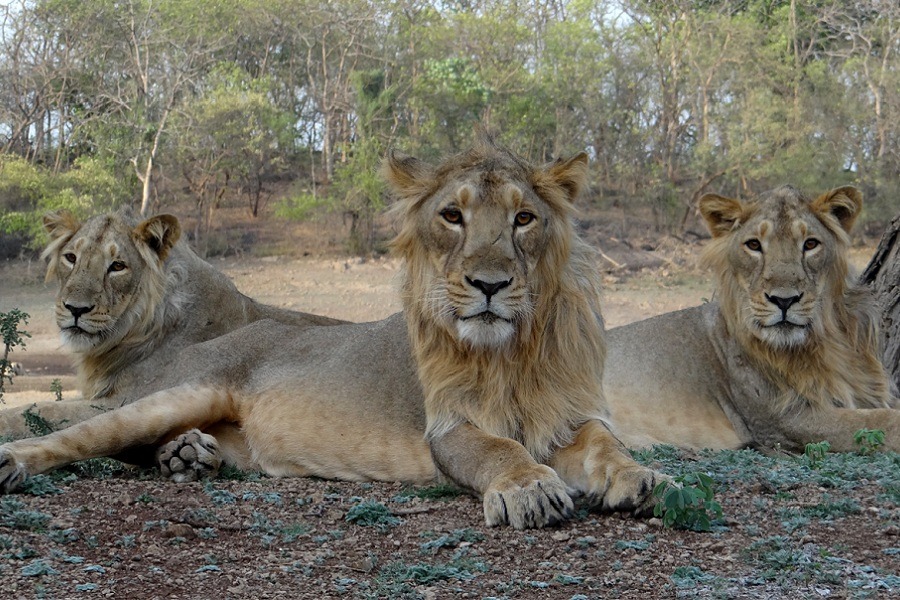 At a distance of 42 km from Somnath, 54 km from Junagadh, 96 km from Diu, 145 km from Porbandar, 156 km from Rajkot, 195 km from Jamnagar, 246 km from Dwarka, 372 km from Ahmedabad, 387 km from Bhuj, 441 km from Vadodara, and 594 km from Surat, Gir National Park is a wildlife sanctuary situated at Sasan Gir in Gujarat. Also known as Sasan Gir, it is one of the renowned national parks in India, and among the best places to include in Gujarat tour packages.

Established as a sanctuary in 1965, Gir National Park is the most popular sanctuaries in India during your wildlife tour as it is the royal kingdom of Asiatic lions and essentially the only place besides Africa on earth where these majestic beasts roam freely. Gir is part of Kathiawar-Gir dry deciduous forests eco-region that stretches across Gujarat, Rajasthan, and Madhya Pradesh. Out of 1412 sq. km area, the park's core zone, which extends for almost 258 sq. km, was declared as a national park in 1975. It is regarded as one of the most popula places of wildlife in Gujarat.

The terrain of the Gir National Park is made up of successive rugged ridges, isolated hills, plateaus, and valleys. Gir forms the catchment of seven perennial rivers and 4 dams - one each on the Hiran, the Shingoda, the Machhundri, and the Raval. The biggest reservoir is the Kamleshwar Dam on the Hiran River, which is called the lifeline of Gir one of the places to visit near Rajkot. Droughts and water scarcity are a major challenge in the region, especially during peak summers.

During the British rule, the lion population touched an all-time low of 20 in the year 1913. The serious conservation efforts by the then Nawab of Junagadh saved the species from the brink of extinction in his own private hunting grounds. Later, the Department of Forest Officials came forward to protect these world's most threatened species. As per the statistics of 2015, the lion population in Gir has risen to 523 from its extinction number of 20 in the year 1913. There are 106 male, 201 female, and 213 sub-adult lions in the wilderness of Sasan Gir.

The entrance gate to the park is located at Sasan Gir village beside Sinh Sadan. Only Jeep Safari is available at Gir. There is no canter safari or elephant safari unlike the other national parks of India. Private open Gypsies, registered by the Forest Department are available locally along with the well-trained Guide. All the Permits are issued online by the Forest Department. Only 30 vehicles are allowed in the national park at a time. Besides, there is also a Gir Interpretation Zone, also known as Devalia Safari Park at Devalia, and was established to reduce the excess of tourists at the Gir National Park. It is an enclosed area of around 4 sq. km that contains a variety of wildlife, including lions. A bus takes visitors on a 30-40 minute tour of it.

The nearest airport to Gir National Park is Rajkot, which is about 157 km away from Gir. At a distance of about 1 km from Gir, Sasan Gir Railway Station is the nearest railway station which has direct trains from Junagadh, Veraval, Delvada, and Dhasa. Sasan Gir Bus Stand is well connected by bus with Rajkot, Ahmedabad, Somnath, Junagadh, Kodinar, Una, Veraval, and Vadodara. However, Junagadh is the nearest major transport hub to Gir.

The park remains open every year from mid-October to mid-June and closed during the monsoon season from July to September. While Devalia Safari Park is open throughout the year. The best visiting season of Gir National Park is during the months of December to March.

How to Reach Gir National Park

#1 of 5 Places to Visit in Gir National Park

At a distance of 500 m from Sasan Gir Bus Stand, Jungle Safari is the major attraction and one of the most popular options to spot animal movement and admire beautiful landscape in Gir National Park. Sasan Gir is the most celebrated wildlife sanctuary in India as it is the royal kingdom of Asiatic lions and essentially the only place on earth where these majestic beasts roam freely after Africa.

Only Jeep safari is available at Gir National Park. There is no canter safari or elephant safari unlike to the other national parks of India. There are eight safari routes, although most overlap with each other, with different entry and exit points. These routes have been made within the tourism zone of the Sanctuary with an average length of 35 km each. They are randomly assigned by the computer along with a driver and guide when you present your permit at the Reception Center, Sinh Sadan, Sasan Gir. One can also visit Kamleswar Dam while on a Gir National Park Safari where one can climb .....

#2 of 5 Places to Visit in Gir National Park

At a distance of 11 km from Gir National Park, Devalia Safari Park is a safari zone situated at Devalia. Also known as Gir Interpretation Zone, it was established to reduce the excess of tourists at the Gir National Park and to facilitate tourists to understand the importance of Gir and its wildlife. It is one of the best places to visit in Gir National Park.

Devalia Safari Park is an enclosed area of around 4 sq. km comprises all habitat types and all major representatives of the wildlife of Gir National Park. The basic aim of creating this facility is to provide an opportunity to view lions and other animals in their natural habitat within a short period and reduce tourist pressure on the sanctuary. The area has a good quantity of prey base in the form of Spotted Deer, Blue Bulls, Wild Boars, Blackbucks, Sambars, and Chinkaras. Spotting a Lion in its savanna habitat is a treat to the eyes of wildlife .....

#3 of 5 Places to Visit in Gir National Park

At a distance of 29 km from Una, 66 km from Sasan Gir, and 76 km from Amreli, Tulsi Shyam Temple is a Hindu temple situated at Tulsishyam in Gujarat. It is one of the revered temples in this region of Gujarat and among the must-visit places as part of Gir packages.

Dedicated to Lord Krishna, Tulsi Shyam Temple is a well-known temple located inside the Gir National Park. Legend says that Lord Krishna eliminated the demon called Tul and so the place is associated with his name along with that of Krishna as Shyam as Tulsishyam. The idol of Lord Tulsishyam is said to be 3000 years old made out of black stone. Visitors need to climb 100 steep steps to reach the temple from the parking. There is also a temple dedicated to Goddess Rukmini Devi on a small hillock near the main temple.

There are three hot sulphur springs that are believed to have healing powers. Of these, the 1st one is filled with hot water, the second .....

#4 of 5 Places to Visit in Gir National Park

At a distance of 6 km from Veraval, 83 km from Diu, 94 km from Junagadh, 131 km from Porbandar, 197 km from Rajkot, 221 km from Jamnagar, 233 km from Dwarka, 408 km from Ahmedabad, 428 km from Bhuj, 447 km from Vadodara, 601 km from Mount Abu, 636 km from Surat, 669 km from Udaipur, 787 km from Indore and 912 km from Mumbai, Somnath is a temple town situated in the Gir Somnath district of Gujarat. Also known as Prabhas Patan, it is one of the most important places of pilgrimage in India, and among the must include places in Gujarat tour packages.

The town of Somnath is famous for the Somnath Temple, considered to be one of the most revered and holy shrines in India. Dedicated to Lord Shiva, the temple is one among the twelve prominent Jyotirlinga shrines and also one of the oldest places of pilgrimage in Gujarat. The meaning of the .....

#5 of 5 Places to Visit in Gir National Park

At a distance of 90 km from Jamnagar, 101 km from Junagadh, 105 km from Amreli, 172 km from Porbandar, 173 km from Bhavnagar, 184 km from Somnath, 214 km from Dwarka, 218 km from Ahmedabad, 231 km from Bhuj, 275 km from Vadodara, 401 km from Surat and 718 km from Mumbai, Rajkot is a bustling city in the Saurashtra region of Gujarat. Situated on the banks of the Aji and Nyari rivers, it is the fourth largest city in Gujarat and among the top Gujarat holiday packages.

Rajkot, literally the City of Princes, is the former princely capital of the Saurashtra region and now an emerging tourism destination and business hub of Gujarat. Built by Thakur Saheb Vibhaji Ajoji Jadeja in 1620 AD, the city has been a seat for the Jadeja rulers. It was named after its co-founder Raju Sandhi. In 1720 AD, Rajkot was seized by Masum Khan, an official ruler of the Junagadh region. After 12 years, Rajkot was conquered by the Jadeja clan. In the year 1807, .....