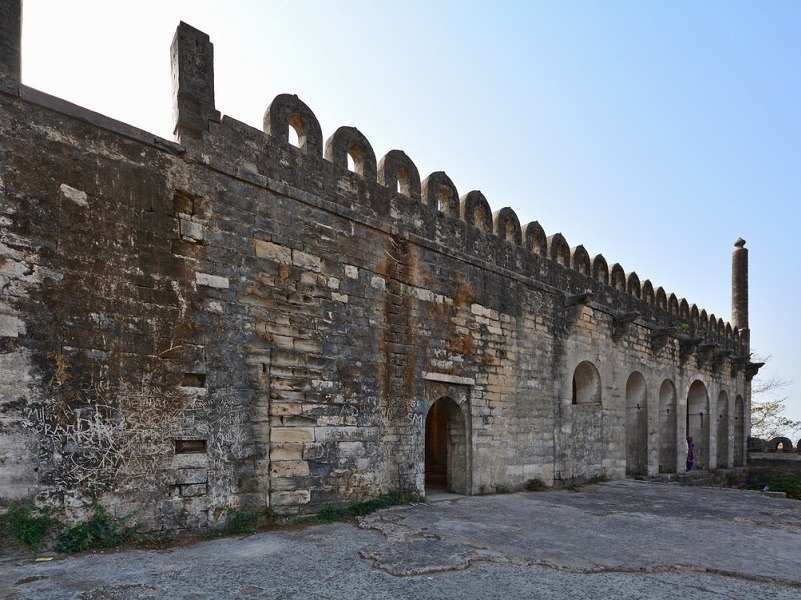 At a distance of 2 km from Junagadh Railway Station, Upperkot Fort is an ancient fort located in Junagadh, Gujarat. Situated at the foot of the sacred Girnar Hill, this is one of the major places of heritage in Gujarat, and among the must include places in Junagadh packages.

Also known as Uperkot, the magnificent fort of Upperkot is said to be built by Chandragupta Maurya in 319 BC and continued to be used during Gupta period. The fort lost its importance when the capital of the Saurashtra region was moved from Junagadh to Vallabhi by Maitrakas and was abandoned for 300 years. Later it was rediscovered and rebuilt with all the updated requirements during 976 AD by Rah Grahar of Chudasama dynasty and later it came under the rule of Mughals in 1473 CE. Further down, the fort came into the hands of Babi Nawabs. The fort has survived for 16 sieges over a period of 800 years due to its strategic location and difficult access. One of these sieges lasted for 12 years but was unsuccessful.

Among the best tourist places in Junagadh, the Uperkot Fort is a true blend of Hindu and Muslim architectural styles. Surrounded by a deep moat, the entrance to the fort is formed by an ornate triple gateway like the Hindu Toran and the walls are as high as 70 feet. The top of the fort is flat dotted with various archeological sites. Just inside the entrance are the insignia of some of Uparkot's former rulers and temples dedicated to Ganesh, Hanuman and Shakti. Close by are two colossal cannons named Neelam and Manek, forged in Cairo and brought by the Turks who sailed to Saurashtra to aid in defending Diu against the Portuguese.

Close by is the 15th-century Jama Masjid of the Uperkot Fort, built from the remains of the palace of Ranakdevi. Adjacent to the mosque is the Tomb of Nuri Shah, ornamented with fluted cupolas and a most peculiar carving over the door. A little further are Upperkot Caves, which belongs to the 200 BC - 200 AD. These caves have well-decorated pillars, doors, windows, and meditation cells. This double-storeyed cave complex was used by Buddhist monks during ancient times. Uperkot Caves are the largest of all three caves of the Junagadh Buddhist Cave Group.

To the east of the Buddhist Caves are two breathtaking step-wells named Adi-Kadi Vav and Navghan Kuvo. Built by the Chudasama Rajputs, these unique structures served as the main sources of drinking water for the people of Upperkot Fort. The Adi-Kadi Vav has a long flight of 120 steps that lead to the water and was built in the 15th century. The 11th-century Navghan Kuvo was built from soft rock and is 52 m deep, reached by a circular staircase winding around the shaft. One can also see a square-shaped artificial Nawabi Lake inside the fort complex.

One can hire tourist guides who are available at the entrance and they will explain you about various spots and its historical importance.