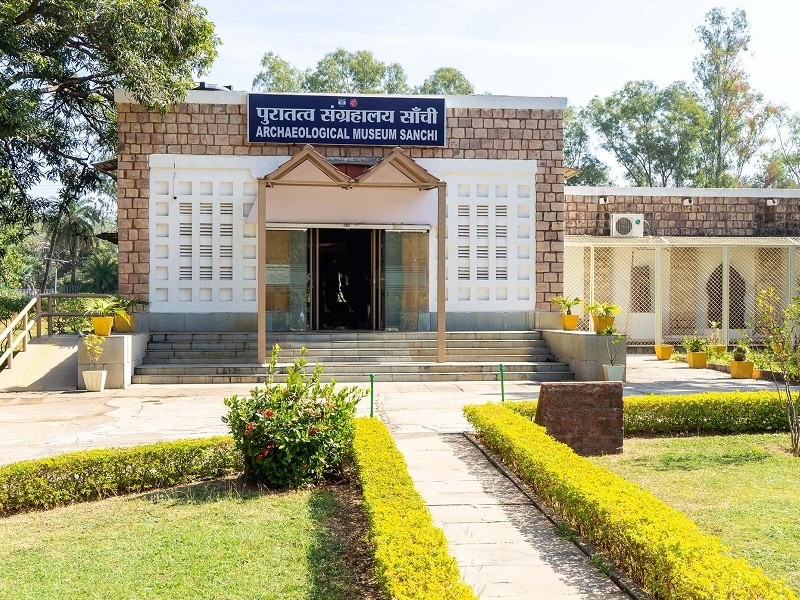 Place Location: Just Outside The Historic Site Of Sanchi

Travel Tips: One can use the same entry ticket of Sanchi Stupa to enter the Sanchi Museum.

At a distance of 1 km from Sanchi Railway Station, Archaeological Museum is a museum located within the historic site of Sanchi, Madhya Pradesh. Situated near the famous Sanchi Stupa, it is one of the must-visit places as part of the Sanchi Tour.

Also known as Sanchi Museum, the Archaeological Museum was established on the hilltop in 1919 by Sir John Marshall. Later, the Archaeological Survey of India acquired a college building at the foothill of Sanchi Stupa and got the exhibits shifted to the new building in the year 1966. The museum exhibits a large number of astonishing leftovers and artworks discovered during excavations at Sanchi itself while the rest are from its neighboring villages including Vidisha, Gulgaon, Gyaraspur, and Murelkhurd. The amazing carvings and tools made of metal showcased in the museum are around 2000 years old.

With a single floored white building, the museum comprises the main hall and four galleries besides exhibits in the verandah and a few in open courtyards. The exhibits in the main hall represent six cultural periods i.e. Mauryan, Shunga, Satavahana, Kushana, Gupta, and late Gupta periods (circa 300 BCE - -700 CE). The highlight of the archaeological museum is the top of the Ashoka Pillar. This stunning pillar capital has a bell-shaped unfolded lotus that is supporting four lions seated back-to-back.

Gallery 1 displays large size Buddhist sandstone sculptures that bear Gupta as well as late medieval period art traditions. The notable sculptures in this gallery are Buddha in meditation bearing auspicious symbols on toes, palm, etc, along with a standing Buddha in varad mudra, and two large images of Nagaraja.

Gallery 2 is divided into two parts. The first part on the left side comprises miniature sculptures datable from 3rd century BC to 12th century AD, while the second part on the right side displays iron objects belonging to the medieval period are displayed. Other highlights in the museum worth taking note of are part of a stone gateway depicting Buddha's enlightenment under a Pipal tree, a sculpture of a female goddess called a 'yakshi', and a red sandstone Mathura Buddha from the 4th century AD.