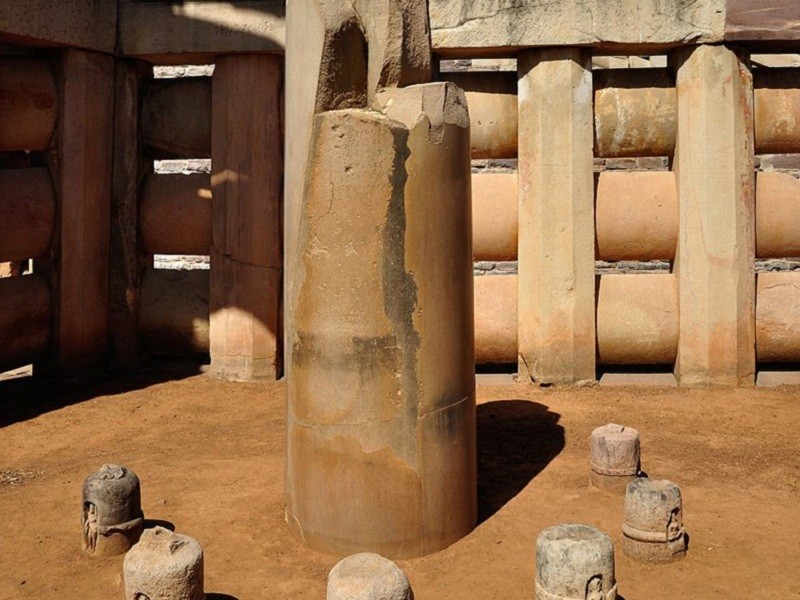 Place Location: Close To The Southern Gateway Of The Great Stupa

At a distance of 1.5 km from Sanchi Railway Station, Ashoka Pillar is one of the pillars built by Ashoka. Situated close to the Southern gateway of the Great Stupa in Sanchi, it is one of the must-visit places as part of Sanchi Packages.

Known for its aesthetic proportions and exquisite structural balance, Ashoka Pillar is one of the most popular attractions in Sanchi. The Pillar erected in the 3rd century BC consists of a shaft and a crown of four lions that stand back to back. It is rather unfortunate but the total Ashoka Pillar does not stand here now. The shaft of the pillar can only be seen at the gateway and the crown has been kept in the Sanchi Museum. The figure of these lions was later adopted as the National Emblem of India.

The structure of the pillar is influenced by the Greco Buddhist style. It also resembles the Sarnath pillar a The sandstone out of which the pillar is carved came from the quarries of Chunar. The pillar is 42 feet tall and consisted of a round and slightly tapering monolithic shaft, with bell-shaped capital surmounted by an abacus and a crowning ornament of four regal lions facing in four directions, with their backs to each other. The abacus is adorned with four flame palmette designs separated one from the other by pairs of geese, symbolical perhaps of the flock of the Buddha's disciples. The capital probably supported a Wheel of Law, as also suggested by later illustrations among the Sanchi reliefs. The pillar has an Ashokan inscription and an inscription in the ornamental Sankha Lipi from the Gupta period.