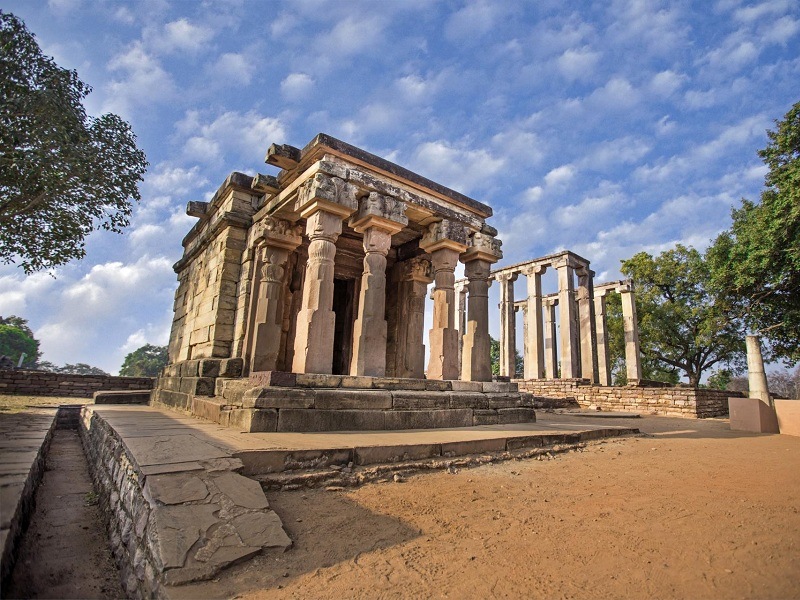 Place Location: Behind The Great Stupa

At a distance of 1.5 km from Sanchi Railway Station, Gupta Period Temple is an ancient temple located within the main complex of the Sanchi Stupas in Madhya Pradesh. Situated near the Great Stupa, this temple is a must-visit attraction in Sanchi.

Constructed in the 5th century AD, Gupta Temple, also known as Temple No.17 is situated on the south-east side of the Mahastupa or the Great Stupa of Sanchi. The temple stands as proof of the architectural excellence of the Gupta period. Most scholars agree that the temple was used for Buddhist worship. While temple-building in Buddhism didn't gain popularity, many of the elements of this temple would go on to be incorporated into Hindu temple architecture.

Temple No. 17 is an early temple of the Gupta period and is an excellent example of simplicity and grandeur. This elegant temple has a simple flat-roofed sanctum with a porch that has four pillars in the front. The ceiling of the sanctum is slightly higher than the roof of the portico or hall. The interior and exterior of the temple are undecorated but the pillars are carved. They are carved with inverted lotuses while the capital, which supports the roof, is carved with small lions. The temple represents one of the earliest known examples of temple architecture in India.

Near the Temple No.17 is the Temple No.18, which might have been a stone-and-brick temple from the 2nd century CE but little of its original structure survives. Temple 18 is much larger than 17, but most parts have been lost, except for the foundation and some pillars. It is a Chaitya temple on a horseshoe-shaped plan and is surmised to have had a Stupa inside.