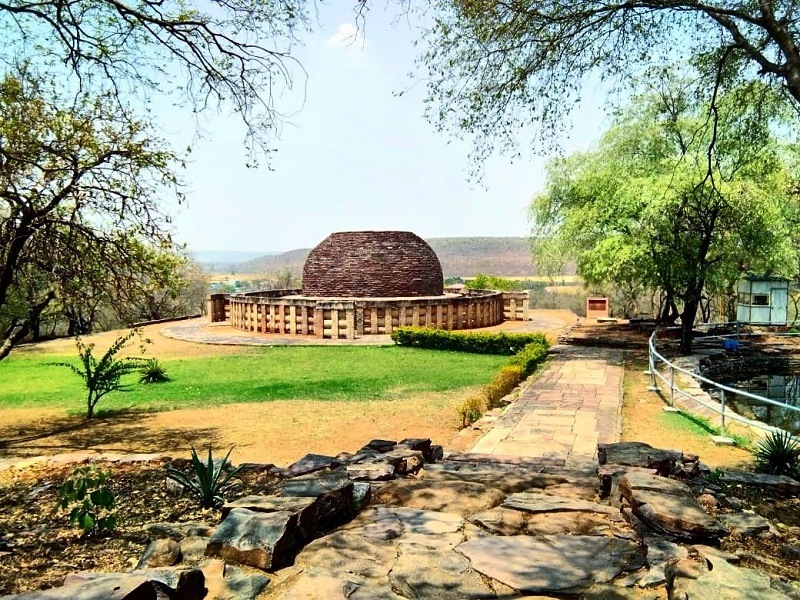 Place Location: To The West Of The Great Stupa

At a distance of 500 m from the Great Stupa, and 2 km from Sanchi Railway Station, Sanchi Stupa 2 or Stupa No.2 is a Buddhist stupa located in Sanchi, Madhya Pradesh. It is one of the Buddhist monuments in the historic site of Sanci, and among the top places to visit in Sanchi.

Stupa 2 stands on the hillside about to the west of the Great Stupa and is one of the oldest existing Buddhist stupas in India. It is believed to have been constructed during the end of the 2nd century to the 1st century BCE and is the oldest of the three Stupas from the Shunga period. It is of particular interest since it has the earliest known important displays of decorative reliefs in India, probably anterior to the reliefs at the Mahabodhi Temple in Bodh Gaya, or the reliefs of Bharhut.

The diameter of the dome is about 14 m. It has no Harmika or Chhatra and has been cut flat on top. The excavation found a relic chamber holding four caskets for ashes made of steatite, on which the names of ten senior priests from the age of Ashoka are engraved. The entire structure is enclosed by a low wall (vedika), but there are no Toranas at the cardinal entrances. The decorations of Stupa No. 2 have been called 'the oldest extensive stupa decoration in existence'. The representation of Buddhist themes is particularly remarkable as you get to see the four events - Nativity, Enlightenment, First Sermon, and Decease - that defined the life of Buddha. Stupa II at Sanchi is therefore considered as the birthplace of Jataka illustrations.