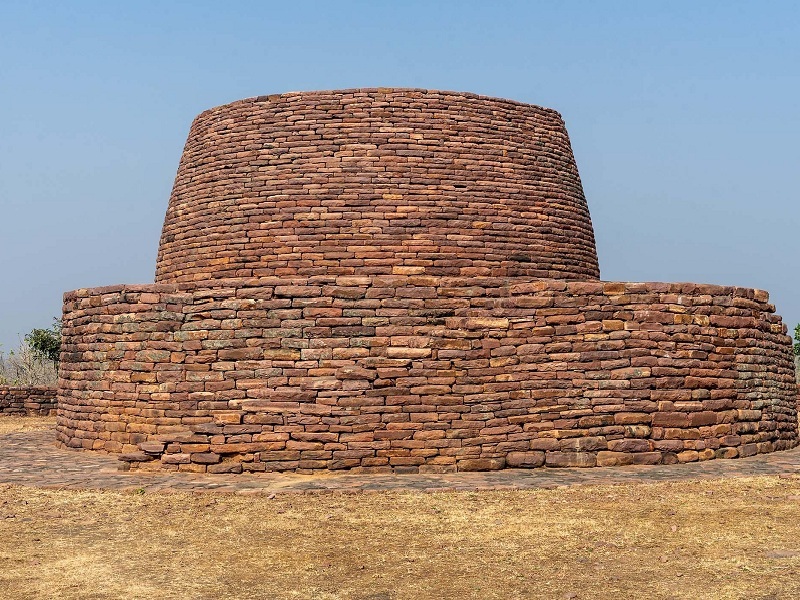 At a distance of 11 km from Sanchi, Sonari is an archaeological site of an ancient monastic complex of Buddhist stupas in Madhya Pradesh. Positioned on a hill, it is one of the must include places in the Buddhist Circuit of Central India, and among the top places to visit near Sanchi.

Like Sanchi, Sonari is again a complex of Buddhist stupas comprising two large and five smaller stupas. The stupas were excavated around 1850 by Alexander Cunningham, who discovered two boxes containing relics. One of the reliquaries, which is very ornate, is visible nowadays at the Victoria and Albert Museum in London.

The date of construction of Stupa 1 and Stupa 2 must therefore be equivalent to those of Sanchi Stupa No.2, i.e. 125-100 BCE. About 15 meters in diameter, Stupa No.1 is a solid hemisphere of dry masonry and is the largest stupa in the complex. It is made over a cylindrical plinth of about four feet high with fragments indicating traces of railings. The stupa contained a miniature soapstone reliquary.

Alexander Cunningham and FC Maisey searched Stupa No.2 in 1851. The stupa contained three miniature reliquaries, two in soapstone and one in rock crystal, as well as a certain amount of bone ash and a piece of wood. The main reliquary is shaped to resemble a lotus bud, with incised petals decorating the lower half of the reliquary. It was turned on a lathe and then carved in bas-relief. The reliquary of Stupa No.2 presents has inscriptions in Brahmi mentioning the names of Buddhist monks also appearing in the reliquary of Sanchi Stupa No.2 and Andher Stupas: Kasapagota, Majjhima, Kosikiputa, Gotiputa, and Apagira. It would seem, then, that the ashes of these monks were divided between these three stupas.

There are smaller stupas nearby and the remains of a monastery where monks would have slept several meters above ground level to protect themselves from animals in the jungle that would have surrounded the site at the time.

The vehicles would only go as far as Sonari village from where the stupas were a three-kilometer walk - over two hills and across one stream.