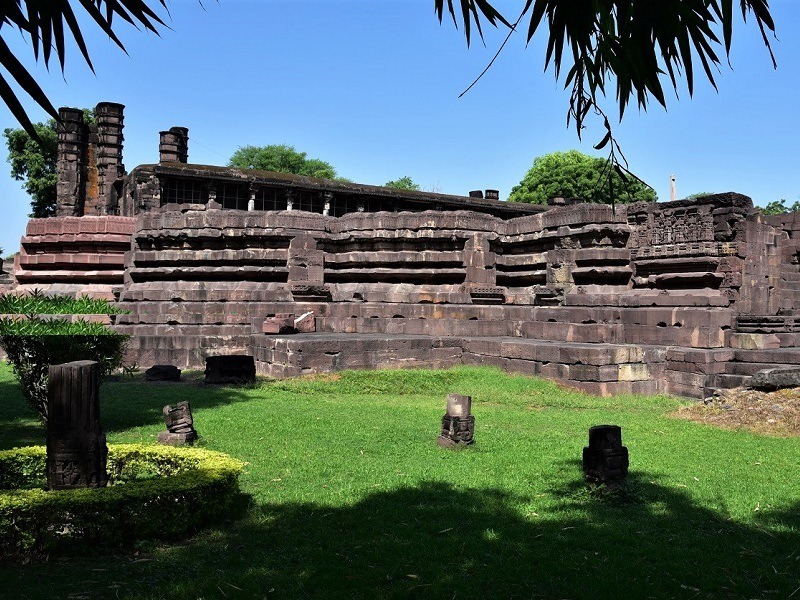 At a distance of 9 km from Sanchi Railway Station, Bijamandal is an ancient temple located in Vidisha near Sanchi, Madhya Pradesh. Popularly known as Vijayamandira Temple, it is one of the must-visit places near Sanchi.

Bijamandal or Bija Mandal was an enormous temple built in the 11th century during the reign of Parmara King Naravarman. The incomplete architectural design and the foundation stones suggest that the construction remained unfinished. This soaring Brahmanical temple was dedicated to the Goddess Charchika also known as Vijaya. The temple was demolished on the orders of the Mughal Emperor Aurangzeb in 1682 and constructed a mosque called Alamgiri Masjid in the same site.

As per the legend, the great temple was 35 m high and 39 m wide. What remains on the site would just have been the base for a much larger structure full of columns and ornately-carved statues. Fascinating carvings from the temple are arranged on the grounds, awaiting classification and display in a museum. Particularly striking are those of Maheshmardini, a standing eight-armed Ganesha, and the dancing seven maternal figures, the Sapta Matrikas.
There is also a stepwell from the 17th century on the same campus which is worth a visit. The well has two tall pillars depicting scenes from Krishna's life. They are considered to be the earliest scenes from Krishna's life in the form of art in central India.

Nearby is the Heliodorus Pillar, a stone column erected around 150 BC by a Greek man who was an ambassador in Vidisha. He had converted to Hinduism and left the pillar with a statue of Garuda on top as a demonstration of his faith.