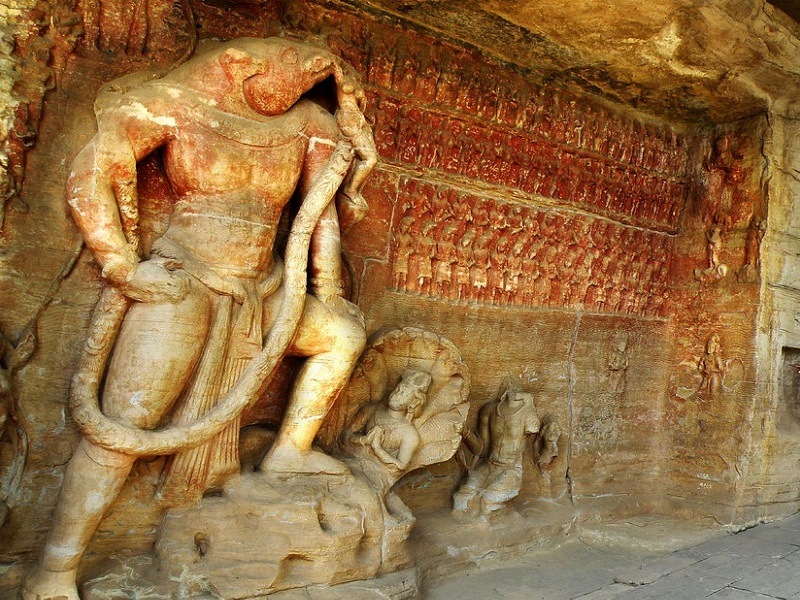 At a distance of 7 km from Vidisha, and 10 km from Sanchi Railway Station, Udayagiri Caves or Udaigiri Caves are a group of rock-cut caves located at Udaigiri village in Madhya Pradesh. It is one of the most important archaeological sites in India, and among the must include places in Sanchi Tour Packages.

Udayagiri, literally means the 'sunrise mountain', was a Buddhist and Hindu site by the 2nd century BCE. The place is also referred to as Visnupadagiri which means the hill at 'the feet of Vishnu'. The Udayagiri Caves are a group of 20 rock-cut caves near Vidisha from the early years of the 5th century CE. They contain some of the oldest surviving Hindu temples and iconography in India. Besides, these caves have rock-cut water tanks, and some have shrines and monuments on top.

Out of 20 caves, one is dedicated to Jainism, while others to Hinduism including Vaishnavism, Shaktism, and Shaivism. The Jain Cave is notable for one of the oldest known Jaina inscriptions from 425 CE, while the Hindu caves feature inscriptions from 401 CE. Cave 1 is the southernmost cave which is also considered to be a false cave since the side and the front were added later on. There are four pillars and the back wall has a deity carved onto it. Cave 2 is located north of Cave 1 but is still in the southern group and has traces of two pilasters. And there is also evidence of a structural mandapa underneath its roof.

Cave 3, also known as Skanda Temple, is the first one of the central group of caves. With a plain entrance and sanctum, there is also a mandapa in front of the shrine and a rock-cut image of the war God- Skanda. Dedicated to Lord Shiva, Cave 4 houses a Shivlinga, and has a plain but impressive doorway flanked by the river goddesses Ganga and Yamuna. Most celebrated of all the caves, Cave 5, looks like a niche, shelters the colossal Varaha panel, the 3rd avatar of Lord Vishnu with a boar's head and a human body, rescuing the Goddess Earth.

Cave 6 is directly beside Cave 5 and consists of a rock-cut sanctum entered through an elaborate T-shaped door flanked by guardians. It also has the representation of Goddess Durga slaying Mahishasura, and a figure of seated Lord Ganesha with modaks in his left hand. Cave 7 is a large niche containing engraved figures of the eight mother goddesses, each with a weapon above their head on the back wall of the cave. The cave is flanked by shallow niches with rubbed figures of Kartikeya and Gaṇesha. There is a Passage right after Cave 7 running east to west like a cleft or a canyon.

Cave 8, called the 'Tawa Cave', is about 14 feet long and 12 feet broad. The cave is badly damaged but contains a historically significant inscription. The cave is notable for its 4.5 feet lotus carving on the ceiling. Caves 9, 10 & 11 are small excavations next to each other near Cave 8. Their entrance opens north-northwest, and all have damaged Vishnu carvings. Cave 12 is known for its niche containing a standing figure of Narasimha, the man-lion avatar of Vishnu. Cave 13 has a large Anantasayana panel, which depicts a resting figure of Vishnu as Narayana. Underneath the figure of Vishnu are two men - the kneeling one is the king Chandragupta while the other one is his minister Virasena. Cave 14 is the last one in this group, and has a small square recess chamber, with only two of its sides preserved.

Caves 15 - 18 are a bunch of small square caves that are distinct from each other mostly in design. Cave 17 is known for its Ganesh image and Goddess Durga in her Mahishasura-Mardini form. The cave has an intricate symmetric lotus set in a geometric pattern on the ceiling. Cave 18 is notable for its four-armed Ganesha, along with a devotee who is shown carrying a banana plant. Situated close to the Udayagiri village, Cave 19 is the largest of all in the group and is also known as the 'Amrita Cave'. It has several pillars with carvings of four-horned and winged creatures. The doorway is more elaborately ornamented than the other caves. There are elaborate narratives of the Goddesses Ganga and Yamuna, and also stories from the Hindu mythology carved on the walls of the cave. It also houses two Shiva Lingas.

Cave 20 is the only cave in the Udayagiri Caves complex that is dedicated to Jainism. Located in the northwestern edge of the hills, the entrance of the Cave is adorned with the image of the Jain Tirthankara Parshvanatha sitting under a serpent hood. The interiors of the cave have been divided into five rectangular rooms with stones stacked. It has inscriptions about the Gupta Kings. Also, the cave has other features like Jina reliefs which have carvings of the chattras carved atop them.