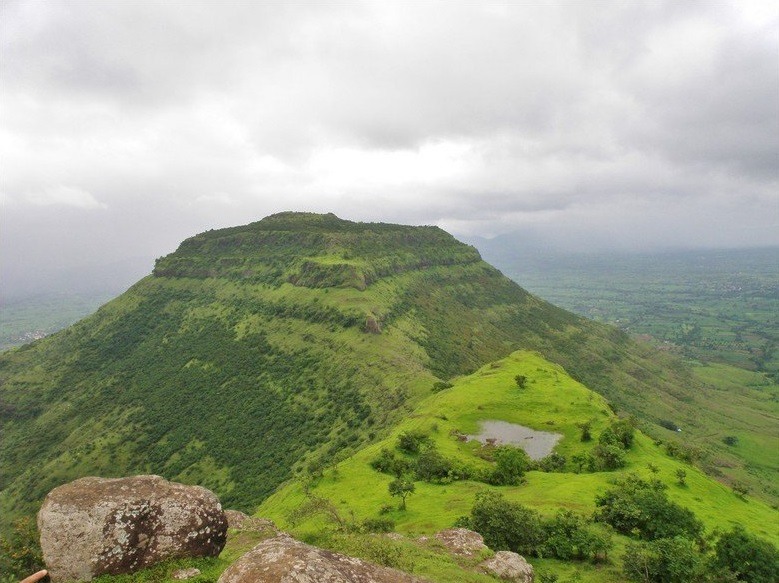 Chandan - Vandan Forts were built by king Bhoj II of Shilhara dynasty in late 12th century. Shivaji Maharaj won these forts from Adil Shah of Bijapur in 1673 CE along with Kalyangad, Sajjangad, and Ajinkyatara during the campaign of Satara. It was under the control of Marathas till 1689 CE after it passed in the hand of Moghuls. In 1707 CE, the fort was occupied by Marathas under Sahu Maharaj.

There are two bastions at the entrance gate of Chandan Fort which are presently in a half-demolished state. There is a banyan tree at the upper side of the entrance which is known as Panchvad, as it is comprised of five banyan trees. A temple of Lord Shiva is situated near the Banyan tree. The fort also houses an old mosque. An intact bastion can be seen at the north end of the fort with a Shivalinga and statue of lord Hanuman over the bastion. Three rooms without roof can be seen at the southern part of the fort. According to villagers, it was a storage room for ammunitions. There is a large quadrangular raised platform, commonly known as Sadar, at the center of the fort.

The Vandan Fort is in good condition. There are few rooms built near the gate. The southern part of the fort has a Dargah built using stone. There fort has two entrances. The first entrance is sturdy having bastions which are still intact. There is an idol of Lord Ganesha on the left bastion. The second entrance is completely tumbled down with Persian inscriptions on the arch. Many dilapidated structures can be seen in the fort. There is an old dried up natural lake with a mosque and a storage room nearby.

The Chandan and Vandan are adjacent forts. The trek to both the forts is easy and can be completed in a day. There are two ways to reach these forts. The first one starts from Dudhanwadi village which is easiest one and the other one from Belmachi. It takes about 1 hour trekking (around 2 km to the Chandan Fort from Dudhanwadi. A narrow path separating from the main path leads to the Vandan Fort. It takes around 45 minutes to reach Vandan Fort from Chandan Fort.