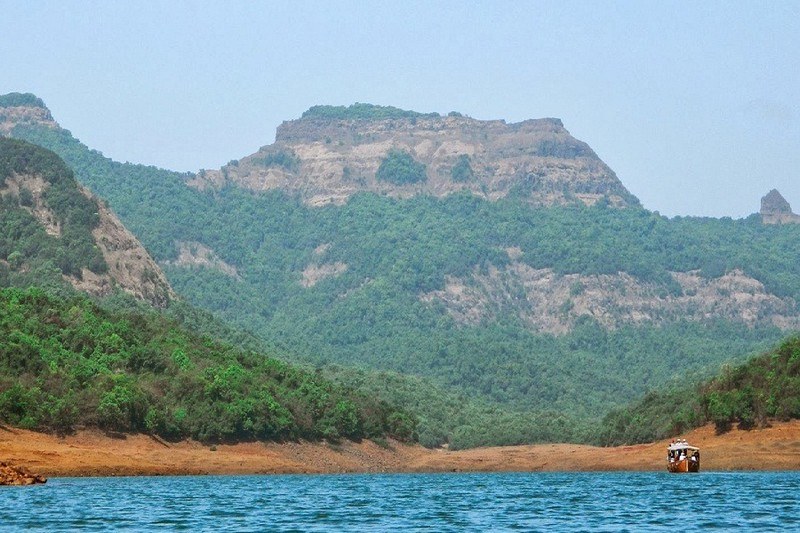 At a distance of 18 km from Bamnoli, 56 km from Satara, 70 km from Mahabaleshwar and 82 km from Panchgani, Vasota Fort is an ancient hill fort situated at an altitude of 1171 m near Bamnoli in Satara district of Maharashtra. The fort is situated in the deep forests and valleys of Koyna Wildlife Sanctuary. It is one of the best places to visit in Satara and also one of the popular places of trekking in Maharashtra apart from being an ideal picnic spots near Pune for one day trip.

Situated on the banks of the Shivsagar Lake, Vasota Fort is surrounded by water on three sides. The Fort was built by King Bhojraj II of Shilhara dynasty in 1178-1193 AD. Chhatrapati Shivaji Maharaj captured the fort in 1655 AD and renamed it as Vyagragad. In 1818 AD along with other forts of Marathas this fort also came under British control.

Vasota Fort, now in ruins, is famous for its traditional Maharashtrian architectural style. The fort comprises of three main sections - Old Fort, New Fort and Nageshwar. The bastions of the fort are still in well condition. There are two temples on the fort, the Mahadev temple and the Nageshwar temple. The temple of Lord Hanuman is placed at the entrance. Babu Kada is a huge U shaped cliff lies next to the Vasota Fort. From this point one can view the Old Vasota Fort which is closed for trekkers due to the presence of wild animals. Nageshwar is a cave carved in the pinnacle with Mahadev temple inside. It is clearly visible from Vasota Fort and needs 2 more hours trek to reach the Nageshwar Cave from the fort.

Vasota is an ideal destination for adventure lovers. The fort offers trekking, mountaineering, and rock climbing. One can see the backwaters of Shivsagar Dam and the mountain range of Kas Mahabaleshwar from the top of the fort.

Bamnoli is the nearest station for Vasota which is 38 km away from Satara. Vasota Fort is under Sahyadri Tiger Reserve so visitors need to take permission from forest office of Bamnoli before commencing the trek. Backwater of Koyna Dam has interrupted direct connection between Bamnoli and Vasota Fort. From Bamnoli one needs to travel to base village Met Indavali by boat which takes around 1.5 hrs. There is a check point of Forest Department at Met Indavali. From here the forest path leads to the top of Vasota which takes about 3 hours to reach. It is a gradual climb through dense forest.

Bamnoli Forest office opens at 8 AM and the first boat from Bamnoli to Met Indavali starts at 8.30 AM. Visitors need to complete their trek before 5.30 PM, because it is not allowed to stay in the forest after 5.30 PM. The trek remains closed from June to October.