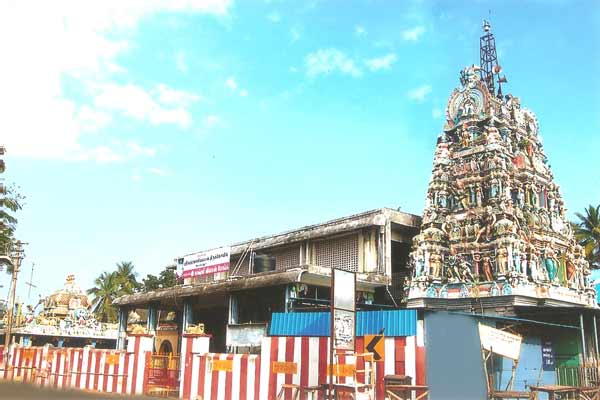 Travel Tips: This place is usually visited from Thirunallar (10 km)

At a distance of 15 km from Karaikal, 10 km from Thirunallar, Bhadrakali Temple is located in the Ambagarathur village of the Karaikal district. The ancient temple is dedicated to Goddess Parasakthi, an incarnation of Goddess Parvathi.

The temple facing north has an attractive Rajagopura, large wide corridors and mandapa surrounding the temple. The temple houses an image of the goddess with 4 arms made using terracotta. The idol of the goddess is always draped in a white cloth with measures around 20 m in length.

According to legend, two demons called Ambaran and Amban were very cruel and started troubling the world. When Indra, Brahma and Vishnu went and complained about them to Lord Shiva, he sent Bhadrakali to kill them. At that time Ambaran took the form of a buffalo and fought with the Goddess. She cut off his head using her sword. The devas requested Goddess Kali to live in that place and protect the people and she stood there facing the north (Vatabhadra Kali). The place was initially known as Ambara-harattur meaning victory over Ambaran, which subsequently became Ambagarathur.

The goddess is an extremely powerful and thousands of devotees visit the temple on Tuesdays and Fridays at Rahu kalam. On full moon day there is special worship to this Goddess. People who have pain or suffering in their limbs, came to the temple and offer a statue of the limb made in silver to this Goddess. Women waiting for marriage come to this temple on Fridays and light a lamp at Rahu kalam.

Tourists and pilgrims throng this temple especially during the 12 day annual festival celebrated in May / June. Laksharchana conducted on the last Tuesday in the Tamil month of Aadi (July & Aug) and Thai (Jan & Feb) are the other festivals celebrated in this temple.