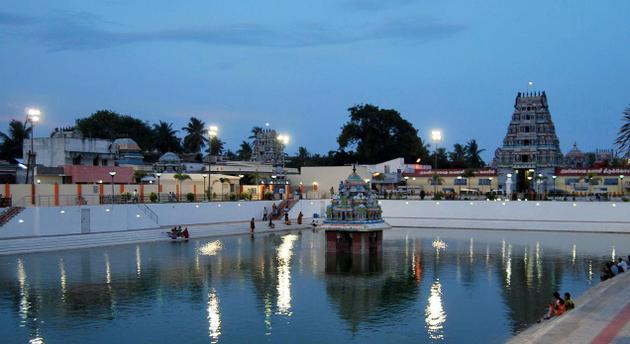 At a distance of 1.5 km from Karaikal Railway Station, Karaikal Ammaiyar Temple is a Hindu temple situated in Barathiar Street in the center of Karaikal Town.

The temple was constructed by Malaiperumal Pillai in 1929. The main goddess is Punithavathi, also known as Karaikal Ammaiyar, the only woman out of the sixty three Nayanmars. This temple is known for the huge idol of the lady saint and there is also a sanctum for Vinayaka inside this temple.

According to history, a lady named Punithavathi lived in Karaikal in 5th century AD. She married a merchant named Paramadatta and performed spiritual Pujas to Lord Siva. One day Lord Shiva sent two mangoes to Paramadatta through a devotee and he sent it home. Lord Siva disguised himself as a Saint and appeared before her for taking food in the house of Punithavathi. She offered food along with mangoes kept for her husband to the Saint. When the food was supplied to her husband he demanded the mangoes that he had given to her. She prayed Lord Shiva and the mangoes reappeared. When her husband inquired about this, she explained the incident to her husband who in turn praised her devotional attitude.

Punithavathiar prayed to Shiva to grant her old age and shed her youthfulness. The lord accepted her prayers and the lady established her abode in the wild jungle of Alangadu, also known as Forest of Banyan Trees.

The Mangani Tirunal festival (the festival of the mango fruit) is observed in the Tamil month of Aani (June-July) on the full moon day. During this festival Lord Shiva comes in procession as Bikshadana with his begging bowl.