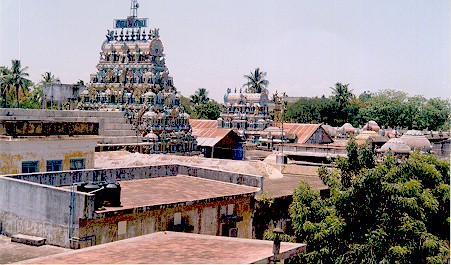 Travel Tips: Bhadrakali Temple / Kali Amman Temple - Ambagarathur is 10 km from Thirunallar and both places can be visited together.

Marakata Linga (Emerald Linga) is located inside Dharbaranyeswara Temple in an iron safe placed on the left side of Thyagaraja. According to legend, a Chola King named Muchukunta Chola helped Indra. For his devotional help, Indra presented the Marakata Linga along with six idols. The king installed the idols and Marakata Linga at different places in his kingdom that is called as Saptha Vidanga.

Thirunallar is the second of the seven Saptha Vidanga Sthalas. The Marakata (Emerald) Linga is known as Nagavidanga. This linga is unique and is only one of its kinds in the world. Hence it attracts the pilgrims regularly. Abhishekam is performed for the linga every day at 6.30 AM and 5.30 PM. It is always very crowded during abhishekam timings. The full moon night in the month of Purattasi (September-October) witnesses several special poojas to the Marakata Linga.

Whoever visits this temple and prays before Lord Saneeswaran is believed to have been relieved of all the curses and sufferings and get the blessings of Lord for a happy and prosperous life.

The Brahmotsavam festival in Vaikasi and Sanipeyarchi festivals are the main festival celebrated grandly in this temple. Adi Pooram, Vinayaga Chathurthi, Navarathri, Ambu festival, Soorasamharam, Thiruvathirai and Sivarathri are the other major festivals celebrated here.