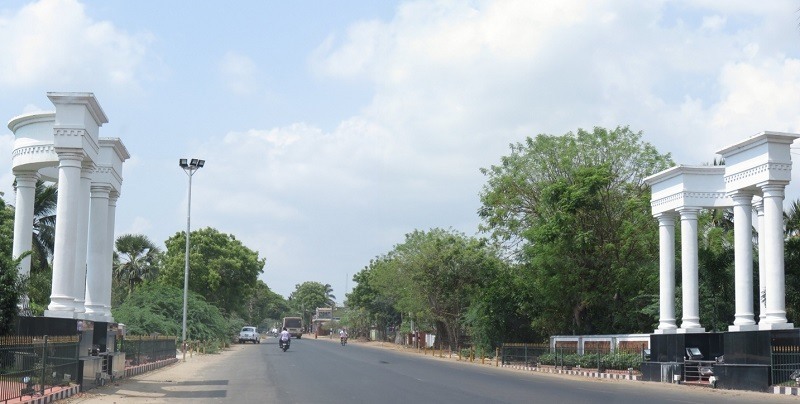 At a distance 130 km from Pondicherry, 285 km from Chennai, 66 km from Chidambaram, 283 km from Rameswaram, 274 km from Madurai, 96 km from Thanjavur & 154 km from Trichy, Karaikal is an important port town and district headquarters under the Union Territory of Pondicherry. Karaikal was a French colony until its merger with Indian Union in 1954. Karaikal is one of the best places to include in your Pondicherry tour packages.

French acquired Karaikal in 1674 and converted that into a major commercial port, primarily trading spices. French acquired trading rights in Karaikal by then Tanjore rulers. In 1739, the current town of Karaikal along with its adjacent villages were transferred to French East India Company by the king of Tanjore, Sahuji. This territory was surrendered to the British in 1761. The control changed between French and British few times until it was finally handed over to French in 1816 until the Treaty of Paris, 1814.

Karaikal has rich heritage and it still holds the old charm. Thirunallar, Karaikal Beach, Karaikal Ammaiyar Temple and Tantondreeswara Temple are few important places to visit around Karaikal. Nagore Dargah (14 km), Nagapattinam (20 km) and Velankanni Church (31 km) are other major attractions in the vicinity of the town.

How to Reach Karaikal - Full Details

Top 10 Places to Visit in Karaikal

At a distance of 1.5 km from Karaikal Railway Station, 23 km from Nagapattinam, 67 km from Chidambaram, 100 km from Thanjavur and 133 km from Pondicherry, Karaikal Beach is one of the best natural beaches in the South Tamil Nadu. It is one of the famous tourist attractions in Karikal located on the banks of Arasalar River. It is popular among the tourists as a place of entertainment and it is also the perfect place for those seeking leisure, tranquility, solitude and piousness.

The beach has been given easy accessibility by widening the 2 km road along the Arasalar River and by illumination of the road, now known as Beach Road. The Karaikal beach offers a lot to adventure lovers and family tourists with water sports like boating, canoeing, kayaking etc. and beach games like Volleyball. In addition to natural sandy beach, a boat jetty in the Arasalar, Children's Park, Restaurants, Tennis Court are also attracting large crowd of local people and tourists.

At a distance of 1.5 km from Karaikal Railway Station, Karaikal Ammaiyar Temple is a Hindu temple situated in Barathiar Street in the center of Karaikal Town.

The temple was constructed by Malaiperumal Pillai in 1929. The main goddess is Punithavathi, also known as Karaikal Ammaiyar, the only woman out of the sixty three Nayanmars. This temple is known for the huge idol of the lady saint and there is also a sanctum for Vinayaka inside this temple.

According to history, a lady named Punithavathi lived in Karaikal in 5th century AD. She married a merchant named Paramadatta and performed spiritual Pujas to Lord Siva. One day Lord Shiva sent two mangoes to Paramadatta through a devotee and he sent it home. Lord Siva disguised himself as a Saint and appeared before her for taking food in the house of Punithavathi. She offered food along with mangoes kept for her husband to the Saint. When the food was supplied to her husband he demanded the mangoes that he had given to her. She .....

At a distance of 1 km from Tirumalarajan Pattinam Bus Stop and 8 km from Karaikal, Aayiram Kaliamman Temple is an ancient temple dedicated to Goddess Kali is renowned for housing a wooden statue of the goddess.

According to legend, a devotee of Senguntha Mudaliar community had a dream to collect a Goddess Amman idol in silver box floating in sea. The next day he visited the sea shore and found the box with the idol of Goddess Amman with inscription in palm leaf indicating that this deity has to be worshipped with 1000 items daily.

Since performing puja with 1000 items could not be conducted daily, the people of the locality decided to have the puja conducted once in 5 years. Accordingly, even today during the Tamil month of Vaikasi, the festival is conducted for 3 days during the months of May and June. After the festival, the idol is kept back in the box to be opened during the next festival after 5 years. The temple will be kept open throughout the year but the original idol .....

At a distance of 1.5 km from Karaikal Railway Station, Sri Nithya Kalyana Perumal Temple is situated on the Bharathiar Road and close to the Karaikal Ammaiyar Temple.

This temple dedicated to Lord Vishnu has an idol of Vishnu carved using a single stone in the lying posture (known as Ananthasayanam). The temple premises also have shrines of Alamelu Thaayar and Aandal.

Rama Navami, Vaikunta Ekadasi, Hanuman Jayanti and the entire month of Margazhi are the festive days at this temple and large number of pilgrims visits the temple on these occasions.

At a distance of 2.5 km from Karaikal Railway Station, Sri Parvatheeswara Swami Temple is situated on Thirunallar road near Pondicherry University.

This temple is dedicated to Lord Parvatheeswara, an incarnation of Lord Shiva. This is a west facing temple and represents Chola architectural style. It is believed to be built around the 8th century, during the reign of Pallavas but the temple was thought to be reconstructed during the period of the Cholas. The site is one of the four places in Karaikal region visited by Thirugnanasambandar, a saint who sang Pathigam in honour of Sri Parvatheeswara Swami. The temple celebrates Vijayadasami, Kadaimuzhukku, Thiruvadhirai and Surasamharam festivals.

At a distance of 1.2 km from Karaikal Railway Station, Mastan Syed Dawood Dargah is a famous tomb that houses the relics of Syed Dawood, a Muslim saint born at Bukhara, a city in Uzbekistan. The saint arrived in India for taking spiritual guidance from Halareth Syed Ahmed Kalkhel Diwan Oliulla of Trichy. Staying in the region during his entire lifetime, the saint died in February 1829 at the age of around 120 years.

Kandoori Festival is one of the most popular Muslim festivals in the region which is held at Mastan Syed Dawood Dargah in Karaikal. This festival is celebrated with great enthusiasm by local people in honor of Syed Dawood. The dargah is adorned with flowers and other decorative materials during the annual Kandoori festival, which is marked by processions, music, dance and display of fireworks.

At a distance of 9.5 km from Karaikal, Sri Tantondreeswara Temple is an ancient shrine situated in Nedungadu and is believed to have been constructed during the Chola period. Dedicated to Lord Shiva, this temple is also known as Tantondrinathar Temple.

Sri Tantondreeswara Temple is named after the local deity Nedunthuyar Theertha Nayaki, meaning one who redressed the longstanding grievances of the people, the consort of Tantondrinathar or Swayambhu Eswara. The temple was declared as a protected monument in 1971. The temple features many inscriptions on the outer walls of the sanctum. It is also believed that the temple was renovated by the Nayak Rulers of Thanjavur. Tourists throng to the temple especially during the celebrations of Thiruvadhirai festival and the annual festival at Sri Mariamman Temple.

Several architectural excavations were conducted near the temple site in 1948, 14 Bronze idols belonging to the 14th century were unearthed in the vicinity of this temple. The .....

At a distance of 15 km from Karaikal, 10 km from Thirunallar, Bhadrakali Temple is located in the Ambagarathur village of the Karaikal district. The ancient temple is dedicated to Goddess Parasakthi, an incarnation of Goddess Parvathi.

The temple facing north has an attractive Rajagopura, large wide corridors and mandapa surrounding the temple. The temple houses an image of the goddess with 4 arms made using terracotta. The idol of the goddess is always draped in a white cloth with measures around 20 m in length.

According to legend, two demons called Ambaran and Amban were very cruel and started troubling the world. When Indra, Brahma and Vishnu went and complained about them to Lord Shiva, he sent Bhadrakali to kill them. At that time Ambaran took the form of a buffalo and fought with the Goddess. She cut off his head using her sword. The devas requested Goddess Kali to live in that place and protect the people and she stood there facing the north (Vatabhadra Kali). The .....

At a distance of 6 km from Karaikal, Melakasakudy is one of the popular villages of Karaikal district located on the Karaikal - Nedungadu Road. It is famous for the Varadaraja Perumal Temple which was constructed in the 12th century.

This temple is protected by the state authorities as an ancient monument. The interiors and exteriors of this temple have beautiful stone carvings that enhance the beauty of the monument. Tourists and pilgrims visit this temple mainly during the celebrations of Vaikunta Ekadasi, Thiruvathirai, Chithirai Pournami and Masi Magam festivals. Tourists can also visit Sri Naganatha Swami Temple which is located in the vicinity of the village.

Best Places to Visit in Pondicherry