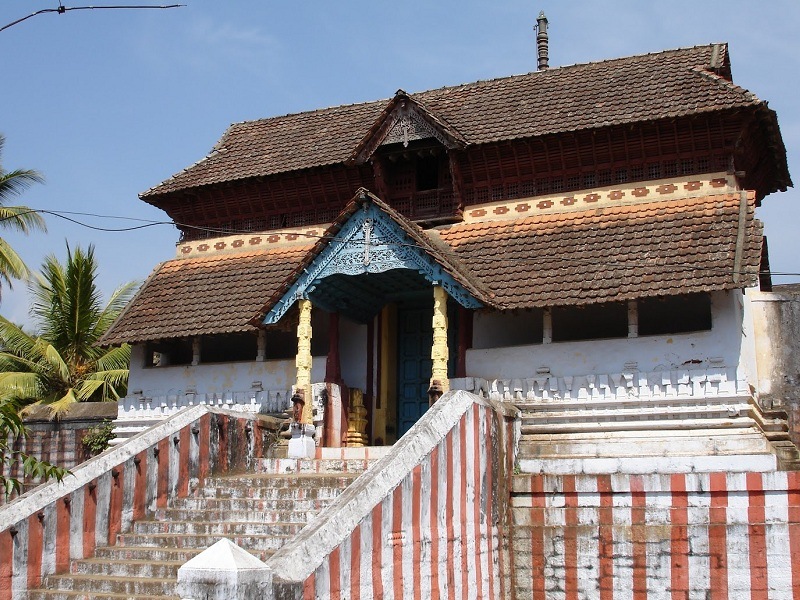 #18 of 20 Places to Visit in Kanyakumari

At a distance of 7 km from Marthandam and 45 km from Kanyakumari, Sri Adikesava Perumal Temple is a Hindu temple located in Thiruvattaru. It is one of the 108 divya desams of Sri Vaishnavas and also one of the popular places of pilgrimage in Kanyakumari.

The temple is dedicated to Sri Adikesava Perumal, meaning 'Foremost Friend'. According to the legend, Lord Adikesava defeated the demon Kesi. The demon's wife prayed to the River Ganges and River Thamirabarani and created destruction. They came in spate to wash off the Lord. Mother Earth simply raised the ground level where Perumal was reclining. Both Rivers went round the Lord, prayed to Him and continued to flow round as two garlands. Thus, the formation of the rivers made in a circle came to be known as Thiruvattaru.

The temple was built in Dravidian style architecture with wooden pillars, doors and roofs. The presiding deity here is in reclining posture along with Goddess Maragathavalli Nachiar. Though there are similarities between the Anantha Padmanabhaswamy Temple of Thiruvananthapuram, the Thiruvattar temple is older. The gigantic idol of the Lord stands at 22 feet, bigger than Anantha Padmanabhaswamy. The presiding deity is made of mustard, lime powder and jaggery. The lord is lying on his snake couch and has to be viewed through three doors. Adikesava Perumal's feet is on the left and head on the right; it is the reverse in Anantha Padmanabhaswamy Temple. A Shiva lingam is situated near Lord Adikesava Perumal inside the sannidhi.

There are close to 50 inscriptions inside the temple in both Tamil and Sanskrit including those relating to Kulothunga Chola I and his contribution to this temple. In addition to the inscriptions, one also finds a number of stunning sculptures on the pillars similar to the ones in Krishnapuram and Srivaikuntam. Another remarkable feature is the Ottakkal mandapam outside the sanctum measuring 18 feet width and 3 feet height that has been built on a single stone in the 12th Century AD. Udaya Marthanda mandapam has exquisite wooden carvings and the highlight is the wedding procession of Lord Ganapathi. The corridors have 222 salabhanjikas and are unique. The rays of the sun fall directly on Lord Adikesava Perumal in March-April and in September-October.

Vaikunta Ekadasi is celebrated with pomp and glory. Paal Payasam (Milk Kheer), Aval and Appam are delicious prasadams at this temple. The pujas are done in the same manner as that of the Sri Padmanabhaswamy temple, Thiruvananthapuram.