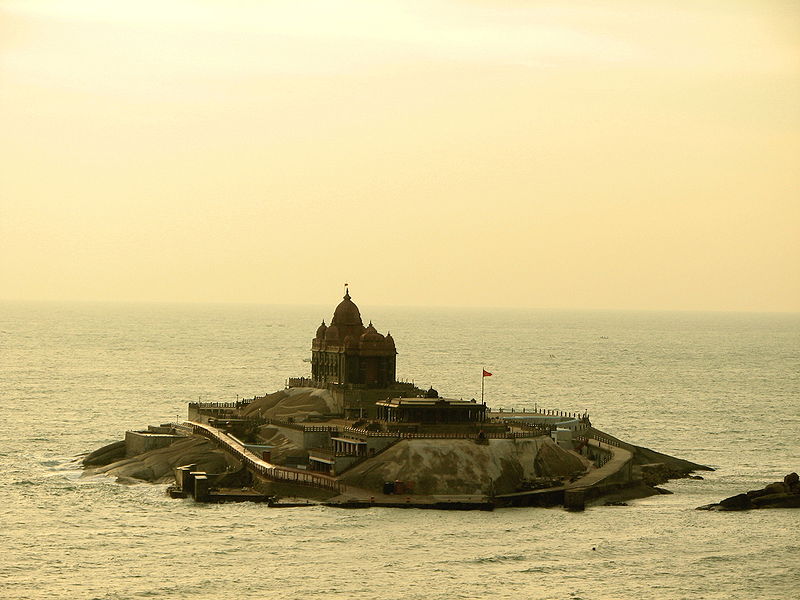 #1 of 20 Places to Visit in Kanyakumari

Travel Tips: Vivekananda Rock Memorial & Thiruvalluvar Statue are located on adjacent islands and should be visited before 4 PM.

Vivekananda Rock Memorial was built in 1970 in honor of Swami Vivekananda on one of the two adjacent rocks projecting out of the Lakshadweep Sea. This is the site where Vivekananda attained enlightenment. Below the statue was mentioned the year of death of Swamiji and the 'probable' dates when Swamiji attained Samadhi on the rock. Vivekananda's Rock also holds religious significance to the locals. It is believed that Goddess Devi Kumari blessed the rock while performing austerity.

The memorial consists of two main structures, the Vivekananda Mandapam and the Shripada Mandapam. The Shripada Mandapam has a study hall and a museum, where you can explore Vivekananda's life and work in depth. There is a 'Dhyana Mandapam' located beside to memorial, which serves as the meditation hall for the visitors to meditate. The style of architecture followed here is distinctive and incorporates various temple styles from all over India. It is one of the must include places in Kanyakumari packages.

Vivekananda Kendra aka the living memorial lies alongside the rock memorial. Its existence was first mentioned in 1964 and it was officially founded in 1972 after a groundwork of 9 years. The Kendra has twin objectives of man-making and nation-building.

Vivekananda Rock Memorial is located about 500 meters east of the mainland of Vavathurai in Kanyakumari. Regular ferry service exists between the mainland jetty and the rock.