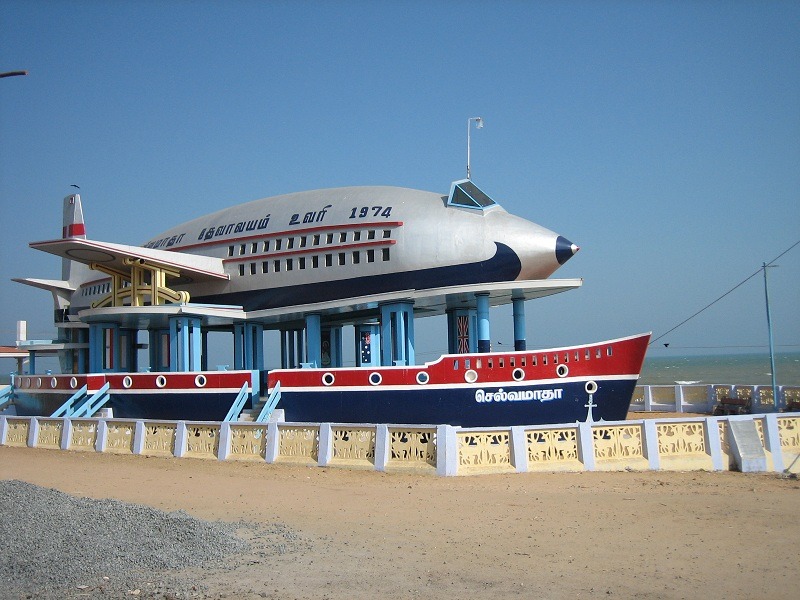 #17 of 20 Places to Visit in Kanyakumari

At a distance of 2.5 km from Uvari Swayambulinga Swamy Temple, 52 km from Kanyakumari and 70 km from Tirunelveli, Kappal Matha Church, also known as Selva Matha Church, is located on the shores of Bay of Bengal at Uvari Village in Tirunelveli district of Tamilnadu.

The church is dedicated to Mother Mary. It was constructed in the year 1974, when the original church was damaged due to sea erosion. It is built in the shape of an aero plane placed over a ship. The church is facing the blue sea and the moving waves of the sea near gives an impression that this is sailing on the sea. Due to its architecture, this church is called Kappal Matha Church, Kappal means ship in Tamil.

This church remained under the control of pastors of the Goa Mission for many years. Various festivals were celebrated at this church during the reign of pastors of the Goa Mission. It is said that there was a practice among the virgins going to the nunnery to spend the night there. On one such occasion, these virgins saw a glittering light encircling the statue of Selva Matha for more than an hour. This was also viewed by several other people and that day is celebrated as the festival day. On that day, a procession is held around the town, by carrying the Selva Matha statue in a chariot. Hence, 18th September, the date when this happened, is celebrated every year in the Church, with great pomp and splendor.

Uvari is famous for the St. Anthony's Church - a stunning monument carved out of rock. It is also known for its ancient Shiva temple, Swayambulinga Swamy.