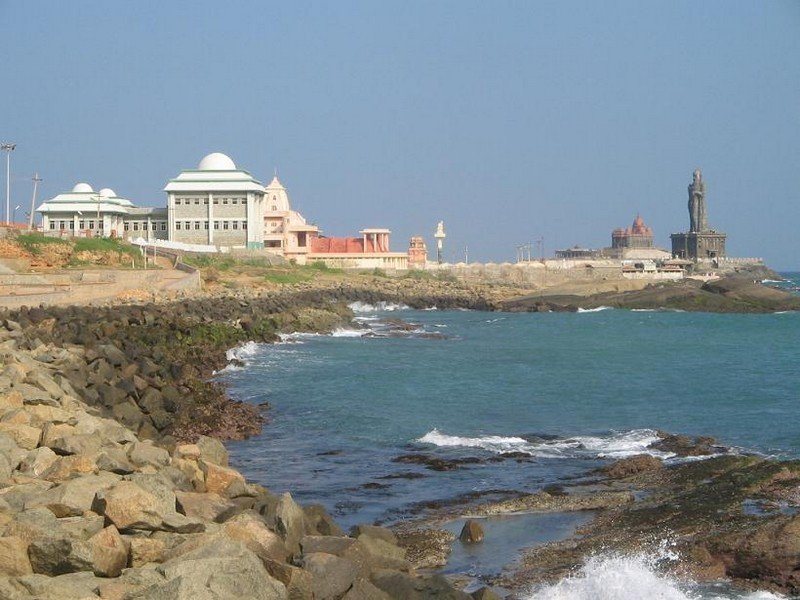 At a distance of 22 km from Nagercoil, 82 km from Tirunelveli, 85 km from Trivandrum, 130 km from Tuticorin, 242 km from Madurai, 375 km from Trichy, and 707 km from Chennai, Kanyakumari is a coastal town located at the southernmost tip of the Indian Peninsula in Tamil Nadu. Also called Cape Comorin, it is one of the must include places in Tamilnadu tour packages, and among the best Places to visit in Tamilnadu.

Kanyakumari is a popular tourist place and a place of great natural beauty. The city gets its name from the Hindu goddess Kanyakumari who was also known as Kumari Amman. Swami Vivekananda is said to have been lived here for a while and meditated. It is situated at the confluence of Bay of Bengal, Arabian Sea and Indian Ocean. This place offers marvelous Sunset and Sunrise views. It is the only place in India where one can enjoy the unique spectacle of Sunset and Moonrise simultaneously on full moon days as part of Kanyakumari tour packages.

Kanyakumari has been a great centre for art and religion for centuries. It was also an area of great trade and commerce. It was ruled by Cholas, Pandyas and Nayaks. Later on, Kanyakumari came under the rule of the Venad dynasty and its capital was located at Padmanabhapuram. In spite of the troubles encountered in the southern border of Venad, Marthanda Varma expanded the kingdom northwards to Aluva and established the kingdom of Travancore. In 1745, the capital was shifted from Padmanabhapuram to Thiruvananthapuram. Kanyakumari was ruled by the kings of Travancore, under the authority of the British, till India's independence in 1947, after that it became a part of the independent Indian Union.

Kanyakumari is held in high regards by the Hindus owing to its scared temples. One of the main attractions in Kanyakumari is the Kumari Amman Temple. Considered as one of the Shakti Peethas, this temple attracts large number of devotees every year. The Vivekananda Rock Memorial, Gandhi Memorial, Thiruvalluvar Statue, Padmanabhapuram Palace, Suchindram, Pechiparai Reservoir, Vattakottai Fort, St Xavier's Church and Udayagiri Fort are the places to visit in Kanyakumari. Some of the popular beaches near Kanyakumari are Thengapattinam Beach, Sanguthurai Beach and Chothavilai Beach.

The Chaitra Poornima Festival, Navratri, and the Holy Annual Festival of the Catholic Church are some of the major festivals celebrated in Kanyakumari. Kathakali is the most popular traditional dance form in this region.

How to Reach Kanyakumari - Full Details

Top 10 Places to Visit in Kanyakumari

#1 of 20 Places to Visit in Kanyakumari

Vivekananda Rock Memorial was built in 1970 in honor of Swami Vivekananda on one of the two adjacent rocks projecting out of the Lakshadweep Sea. This is the site where Vivekananda attained enlightenment. Below the statue was mentioned the year of death of Swamiji and the 'probable' dates when Swamiji attained Samadhi on the rock. Vivekananda's Rock also holds religious significance to the locals. It is believed that Goddess Devi Kumari blessed the rock while performing austerity.

#2 of 20 Places to Visit in Kanyakumari

The pedestal of the statue is of 38 feet height and the statue over it is 95 feet tall with a grand total of 133 feet for the entire sculpture. The 3 tier pedestal known as Atharapeedam is surrounded by an artistic Mandapa with 38 feet height. To help the tourists to worship the holy feet of Thiruvalluvar 140 steps are constructed inside the Mandapa.

The view from this point is quite breathtaking! It is a very entertaining and enlightening piece of work and inspires one to lead a very principled and moral life.

Vivekananda Memorial is also located on the adjacent island.

#3 of 20 Places to Visit in Kanyakumari

The temple is dedicated to Devi Kanya Kumari, an adolescent girl child form of Goddess Parvati. The diety is also known as Shree Baala Bhadra or Shree Baala. Kanyakumari Temple is one of the 51 Shakti Peethams. It is believed that the right shoulder and (back) spine area of Sati's corpse fell here creating the presence of kundalini Sakthi in the region. Sage Parashurama is said to have performed the consecration of the temple. This is one of the prime places to visit as part of Kanyakumari tour packages.

#4 of 20 Places to Visit in Kanyakumari

At a distance of 12 km from Kanyakumari, Suchindram is a holy place located on the bank of the river Pazhayar in Tamilnadu. Situated on Trivandrum - Kanyakumari road, it is one of the famous places to visit during your Kanyakumari trip.

Suchindram is known for the Thanumalayan Temple dedicated to Sri Sthanumalayan. The Thanumalayan Temple is of importance to both Shaivaite and Vaishnavite sects of Hinduism, as the name Stanumalaya denotes Trimurtis; 'Stanu' means Siva; 'Mal' means Vishnu; and the 'Ayan' means Brahma. It is one of the popular places to visit near Kanyakumari.

Suchindrum means the place where Indra attained 'Suchi' i.e., purification. The Sthalapurana has it that Indra suffered a curse from sage Gowthama and offered worship to Lord Shiva at this place. Relieving Indra of his curse, Lord Shiva granted him of his wish that .....

#5 of 20 Places to Visit in Kanyakumari

At a distance of 35 Kms from Kanyakumari, 53 Kms from Trivandrum & 700 Kms from Chennai (situated on Trivandrum - Kanyakumari road), Padmanabhapuram is an ancient historical town surrounded by a fort with an area of 187 acres. The ancient capital of Travancore might be constructed before AD 1601. The palace with an area of seven acres, is situated in the very centre on the Padmanabhapuram Fort, amidst hills, dales and rivers.

The fort which was built with mud originally was dismantled and reconstructed with granite by Maharaja Marthanda Varma. The height of the walls varies from 15 ft to 24 ft according to the inclination of the ground.

#6 of 20 Places to Visit in Kanyakumari

An urn of Mahatma Gandhi was kept here for public to pay homage before immersion. Mahatma Gandhi visited Kanyakumari twice in 1925 and 1937. In 1948 his ashes were immersed in the sea waters in Kanyakumari. In commemoration of this event a beautiful monument has been constructed here. It's central shape is 79 feet high representing the age of the Mahatma at that time. The sun at Mid day on 2nd October would fall on the peedam through a hole in the roof.

Visting Hours 7 AM To 7 PM, entrance is Free.

#7 of 20 Places to Visit in Kanyakumari

At a distance of 20 kms from Kannyakumari (situated in Nagarcoil town, on Trivandrum - Kanyakumari road), The Nagaraja Temple is a simple thatched shed, with mud walls.

It enshrines the King of Serpents. Tradition states that a King of Kalakkad was cured of leprosy when he performed penance in the temple. He then rebuilt it in the Kerala style. He might have been Bhuthalavira Sri Vira Udaya Marthandavarma, who ruled Venad, with Kalakkad as the capital. It is believed that snakebite is not fatal within a kilometer of the temple.

#8 of 20 Places to Visit in Kanyakumari

At a distance of 13 km from Pechiparai Dam, 50 km from Kanyakumari, & 51 km from Trivandrum, Thirparappu Falls is an artificial waterfall situated at Thirparappu near Kanyakumari. It is one of the Kanyakumari tourist places.

The Kodayar River makes its descend at Thiruparappu and forms this wonderful waterfall. The river bed is rocky and about 300 feet in length. Descending from a height of about 50 feet, the spectacular falls mystifies the environment with its gushing waters. It is essentially a mix of multiple streams of water flowing from the top to form a majestic water pool at the bottom.

A swimming pool has been constructed for children over here and is a safe place for swimming. There are paddle boats available on rent for boating in the vicinity of the Falls. Mahadeva Temple dedicated to Siva enclosed by strong fortification is very close to the waterfalls and it's one of the important .....

#9 of 20 Places to Visit in Kanyakumari

At a distance of 56 Kms from Kanyakumari (about 8 kms from Trivandrum-Kanyakumari highway), Pechiparai Dam was built during the days of the Maharaja Sri Moolam Thirunal across the river Kodayar.

The construction of the dam was designed on the pattern of the Periyar dam in the Madurai district. The length of the dam is 425.1 mts. It has a catchment area of 204.8 sq.km. There is a camp shed provided at the dam side for the visitors. The weather is very pleasant and hence attracts a large number of tourists.

The reservoir, with beautiful forest around with the backdrop of Western Ghats offers stunning views.

#10 of 20 Places to Visit in Kanyakumari

At a distance of 59 km from Tirunelveli, 35 km from Tuticorin and 92 km from Kanyakumari, Thiruchendur is a small coastal town in the Toothukudi district of Tamil Nadu and is a popular pilgrimage destination situated in the Gulf of Mannar.

Thiruchendur Murugan Kovil is the prime attraction of the town. This temple is considered to be one of the six Padai Veedu (Battle Camps) of Lord Murugan, the others being Thiruparamkundram, Palani, Swamimalai, Thiruthani and Pazhamudhircholai. This temple is known as the second Padai Veedu of Lord Muruga. Lord Muruga won the battle with the demon Surapadma and worshipped Lord Shiva at this sacred place. It is believed that the temple existed since the Vedic period, as it is mentioned in many ancient scripts.

The main entrance to the temple faces south although the sanctum faces east. The 133 feet Rajagopura, built close to the shores of Bay of Bengal, is an outstanding example of Dravidian .....