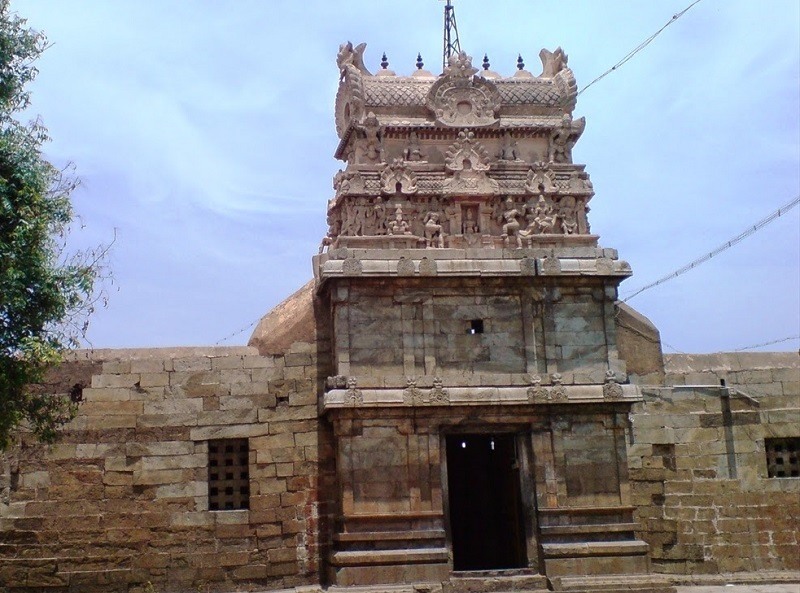 #10 of 18 Places to Visit in Tiruchirappalli

Place Location: Close To The Highway Between Trichy - Thiruverumbu

At a distance of 2 km from Thiruverumbur Railway Station and 13 km from Trichy, Sri Erumbeeswarar Temple is a Hindu temple dedicated to Lord Shiva.

This temple is one of the group of shrines built by Aditya Chola along the banks of River Cauvery, to commemorate his victory over Pandyas during Tirupurambiyam Battle in 885 CE. The temple has several inscriptions from the Chola period dating back to the 10th century. The temple has been declared ŕ protected monument by the Archaeological Survey of India.

The temple enshrines Erumbeeswarar, another form of Lord Shiva as the presiding deity along with his consort Saurabhya Kudalaambal. This temple is built on a 60 ft high hill called as Malai Kovil and can be accessed by a plight of steps. Lord Shiva in this temple is believed to be self manifested. As it is a sand Lingam, no abhishekas are performed here.

According to the legend, there lived a demon Tharukasura, who was an ardent devotee of Lord Shiva, but was against other gods. So he never allowed any one to enter in this temple. Brahma, Indra and all other gods took the form of ants (Erumbu in Tamil) to hide from the demon and worshiped lord at this place. Here we can see that Shiva lingam is slanting to one. We can see the marks of ants creeping on the lingam.

The temple has two enclosures inside and a mandapa at the foot of the hill. The Goddess Narunkuzhal Nayaki is found in a separate shrine outside the main shrine. There are several sub-shrines within the temple complex. The temple has four tanks - Brahma Theertham, Madhu Theertham, Kumara Theertham and Padma theertham.

The annual festival in (May/June), Shivrathri (February/March), Aipasi Annabishekam (October/November) and Tirukarthikai (November/December) are major festivals celebrated in this temple.