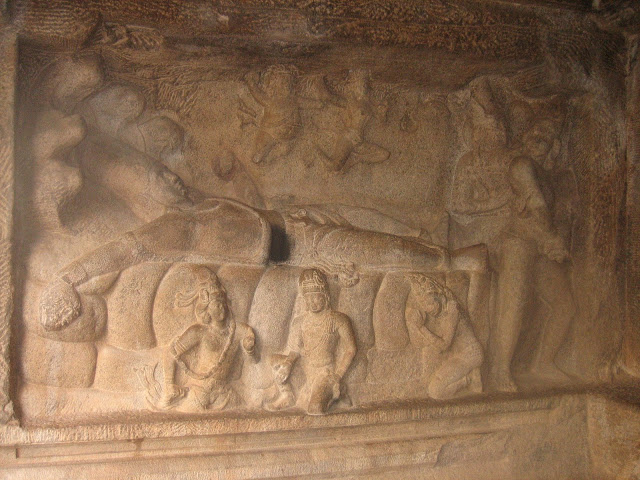 #15 of 18 Places to Visit in Tiruchirappalli

At a distance 42 km from Pudukkottai, 36 km from Trichy, 39 km from Thanjavur & 363 from Chennai, The Malayadipatti Rock-Cut temples are situated on granite hillocks, south of the Malayadipatti village, also known as Thiru Valattur Malai.

There are two temples in Malayadipatti, one for Lord Shiva and the other for Lord Vishnu. Both temples are situated on the same hillock. Built in 8th century by Pallavas, the Shiva temple is older than the Vishnu temple. Constructed by Kuvavan Sathan, the Shiva temple is named as Vakeeswarar, according to epigraphic notes. This temple, popularly known as Alathurthali is situated towards the eastern side of the granite hill.

This temple consists of rock-cut mandapa. The sanctum is built on eastern end in cubical form cut inside the mandapa. In later period, a compound wall enclosing the cave and the front mandapa were built. The pillared mandapa has statues of Ganesha and Muruganalong with Nandi. The entrance gateway is guarded by figures of dwarapalakas. There is also a Shiva Lingam that is cut from the main rock face. There is a Saptamatrika panel placed between sculptures of Veerabhadra and Ganesha.

The Vishnu temple is popularly known as Olipathivishnu Vishnugraham, located closer to the western end of hillock. The rock-cut Vishnu temple includes numerous sculptures, painted stucco and painting on walls and ceiling. The 15 ft Moolavar is a beautifully carved image of Lord Anantha Padmanabha in a reclining posture. The rock-cut temple contains a mukha-mandapa, ardha-mandapa and the sanctum. Almost the entire inner surface is adorned with paintings, sculptures and stucco work.

There is sculpture of Lord Vishnu and Lakshmi. There are figures of Shiva, Narasimha, Brahma and other gods and deities. This entire sculpture is painted and covered with stucco. These artworks appear to be made during 16th - 17th century AD. On the western wall of mukha-mandapa Vishnu is shown in seated position together with his consort.

Another wall is covered with large relief showing reclining Vishnu with Brahma sitting on a lotus Accompanied by Gandharvas. There are figures of demons inside the rock cut temple as well. There are paintings on the ceiling that depict the incarnations of Vishnu, the Dashavatara. There is also a flat-roofed structure, decorated with carvings of elephants and birds along with figures of mythological creatures. The Vishnu temple and cave contains 10 inscriptions dating back to 960 AD.

There are 3 other caves from 3rd - 4th century that housed Jain monks. There are several ancient sculptures found in 2 caves. Another cave has a white painting of a human and a bird probably made out of lime.