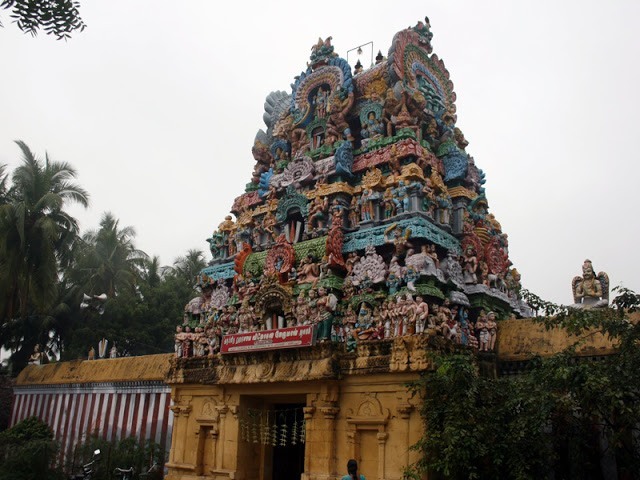 #12 of 18 Places to Visit in Tiruchirappalli

At a distance of 0.5 km from Uthamarkoil Railway Station and 15 km from Trichy, Uthamar Temple also known as Purushottamar temple, Thirukkarambanoor or Bhikshandar Kovil, situated in Uthamarkoil village is dedicated to Lord Vishnu, Shiva and Brahma.

The temple is believed to have been built by the Medieval Cholas of the late 8th century AD, with later contributions from Vijayanagar kings and Madurai Nayaks. Constructed in the Dravidian style of architecture, the temple is glorified in the Divya Prabandha, the early medieval Tamil canon of the Azhwar saints from the 6th-9th centuries AD. It is one of the 108 Divyadesam dedicated to Vishnu.

According to a legend, Brahma became very arrogant because he was the creator. This made him feel superior to Shiva. Brahma once visited Kailasam to meet Shiva. Parvathi, the wife of Shiva got confused and performed pooja to Brahma instead of Shiva. Lord Shiva plucked off one head of Brahma to avoid the confusion between the two. This resulted in Shiva incurring a Brahmahathya dosha. The skull of Brahma stuck to the hands of Shiva which he could not separate despite all efforts. All the food offered to him was consumed by the skull and it never was filled. Holding the skull, Lord Shiva came down to earth as a Bikshadana with his skull bowl. When Shiva came to this place, Lord Vishnu asked Mother Mahalakshmi to offer food in the bowl. When Mahalakshmi did so, the bowl began to over flow and quenched the hunger of Lord Shiva, hence, she became to be praised as Pooranavalli, one who fulfills the requirements of the needy.

The temple has images and separate shrines for Purushottamar, Bikshadanar, Brahma and their consorts Poornavalli, Soundaraya Parvathi and Saraswathi. This is one of the few temples, where the Hindu trinity are worshipped with their consorts in six separate shrines within the same temple complex. The image of Vishnu in the form of Purushottamar is in reclining posture facing the east. There are two shrines located to the south east, each housing the images of Poornavalli and Mahalakshmi. The shrine of Shiva in the form of Bhikshadanar is located in the sanctum behind Purushottamar temple. The granite images of the deities Ganesha, Murugan, Nandi and Navagraha are located in the hall leading to the sanctum. The shrines of Brahma and his consort Saraswati are located in the south west corner of the temple complex.

The annual festival of the temple is celebrated during the Tamil month of Kartigai (November / December).