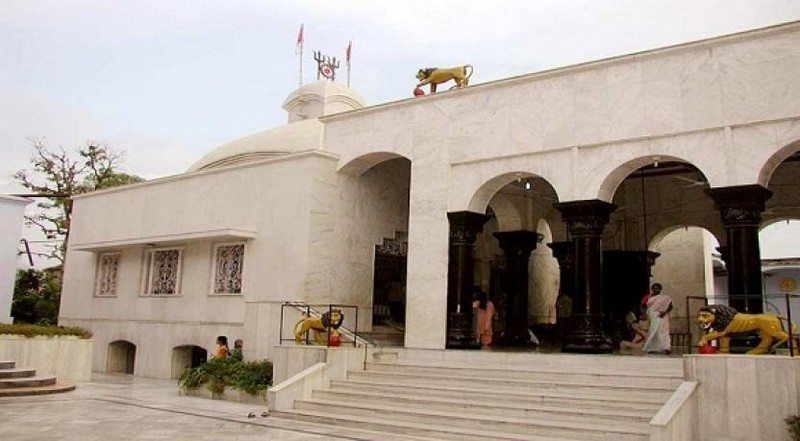 At a distance of 1 km from Vrindavan Railway Station, Katyayani Peeth Temple is one of the 51 Shakti Peeths and known as Uma Shakti Peeth. It is situated within Bhuteshwar Mahadev Temple in Vrindavan.

This temple is dedicated to Goddess Parvati, in the form of Katyayani. The current structure was constructed in 1923 by Yogiraj Swami Keshvanand Bramachari. Here the worship idols are Devi as Uma and Lord Shiva as Bhutesh. There is a sword of Devi in the temple which is popularly known as Uchawal Chandrahaas. According to the belief of local people, girls worship Mata Katyayani to get Sri Krishna as their fellow mate.

According to legend, this place is believed to have been the site where Devi Sati's hair fallen. According to other versions, Katyayani is the Yogmaya power of Vishnu, whom he ordered to be born as the daughter of Nanda and Yashoda, while he was born as Krishna to Devaki and Vasudev. Also, the Adya Shastra has established Katyayani as the deity of Vrindavan.

The architecture of the temple is very beautiful. The exterior of the temple was built using white marble and huge pillars support the temple. Pillars are made with black stone and are beautiful. Just adjacent to the steps that lead to main courtyard, two gold-coloured statues of lions are seen in standing posture. The temple has shrines for five different deities. Along with the goddess Katyayani, Lord Shiva, Lord Lakshmi Narayan, Lord Ganesh and Lord Surya are worshipped here.

Every year during Navratra festival, the temple is flooded with pilgrims from different parts performing offerings to the Goddess Katyayani.