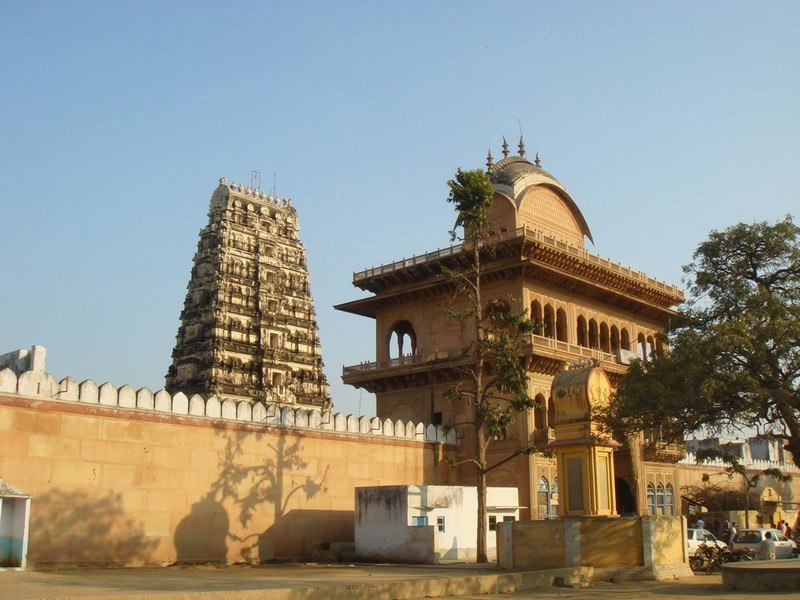 #8 of 14 Places to Visit in Vrindavan

At a distance of 1.5 km from Vrindavan Railway Station, Sri Ranganath or Rangaji Temple is one of the biggest temples in the region. It is dedicated to Lord Vishnu and his consort Lakshmi.

The construction of this temple began in 1845 and was completed in 1851, at a cost of 45 lakhs rupees. It was built by Seth Radha Krishna and Seth Govindadasa of Chennai. It is one of Vrindavan's largest temples and is surrounded by high walls. The deity in the temple is called Sri Ranganatha and is represented in sleeping posture on Shesh Nag. The temple also houses the idols of Sita - Rama and Lakshmana, Lord Narasimha, Ramanujacharya and Venugopala.

The Rangaji Temple is built in South Indian architecture with eight gopuras built in Dravidian style. The main entrance to this temple is on the western side. There is a six-storey gopuram, which is completely filled with carvings. The temple also has a gold plated 50 feet high Dhwaja stambha. There is also a temple tank and a beautiful garden within the temple premises. At the entrance, there is an electronic puppet show and a small museum.

This temple celebrates Brahmotsavam, a 10 day festival in the month of March / April. The festival is popularly known as Rath ka Mela, where devotees pull the Rath to the nearby garden from the temple. The annual Jalvihar festival is also another main attraction of the Rangaji Temple, when devotees in large numbers participate in the ritual bathing of the idol.

The poojas are performed in the temple by South Indian Brahmans. Earlier Non-Hindus were not allowed enter the main temple area where the deity is located, but now they can enter the courtyard.