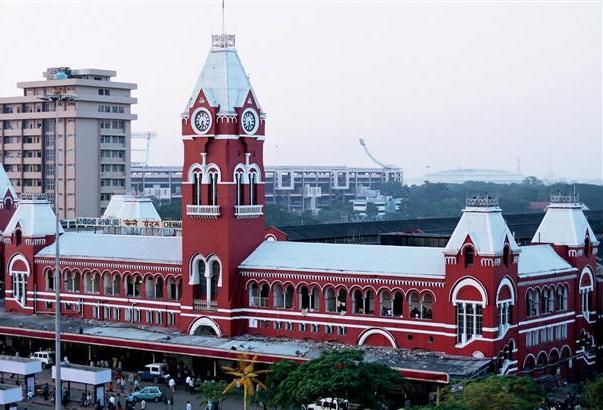 At a distance of 170 km from Pondicherry, 337 km from Bangalore, 629 km from Hyderabad, 453 km from Vijayawada, & 772 km from Trivandrum, Chennai is one of the largest cities in India and the capital city of Tamil Nadu state. It is one of the famous places to visit in Tamilnadu.

Located on the Coromandel Coast of the Bay of Bengal, the city is home to several beaches, museums, parks, temples, and several historical places that can be visited as part of Chennai packages. Chennai, the 'Cultural Capital of India', is the fourth largest metropolis in the country with a population of over 8 million. Formerly called Madras, the present town was founded in 1639, by Sir Francis Day, who arrived with East India Company. The British East India Company established a fort and a trading post at the small fishing village of Chennai. Today, it has emerged as a major industrial and educational center. Chennai with the Bay of Bengal on its side had been a major British trading post for years.

The region around Chennai has served as an important administrative, military, and economic center since the 1st century AD. It has been ruled by various South Indian dynasties, notably the Pallava, the Chola, the Pandya, and Vijaynagara. The area where the present city exists was awarded to the British by Damerla Chennapa Nayaka who a general under Vijayanagara kings ruled from Chandragiri, near Tirupathi. The name Chennai is believed to be derived from Chennakesava Perumal Temple present in the city.

The city is base to around 30% of India's automobile industry and 35% of its auto components industry. Chennai is a highly humid area and winter is the best season to visit. It usually takes two full days to visit major attractions in Chennai.

How to Reach Chennai - Full Details

Top 10 Places to Visit in Chennai

At a distance of 4 Kms from Chennai Central Railway Station (located at Kamarajar Road, near local Chepauk Railway Station), the famous Marina beach is the second longest beach in the World and runs to a length of 13 Km. This is one of the top tourist places to visit in Chennai city and also one of the popular attraction not to miss in a Chennai tour packages.

Situated on the beach, the Anna Park, named after the founder of D.M.K Anna durai and the tomb of M.G. Ramachandran who was a film star (both were former Chief Ministers of Tamil Nadu) and the Statue of Labour is a splendid sculpture depicting the efforts of a team of labourers who are at hard manual labour.

The beach can be ideally visited in the early mornings or in the late evenings when the area becomes a virtual ground with food stalls and other entertainments.

At a distance of 4 km from Chennai Central Railway Station, Governement Museum is a museum situated on Pantheon Road in Chennai. This is one of the oldest museums in India, and among the top tourist places to visit in Chennai city.

Established in 1857, Government Museum is the second oldest museum in the country after the Indian Museum in Kolkata. The museum is located in what is known as the Pantheon complex, or 'public assembly rooms.' Situated in the Egmore suburb of Chennai, it is built in the Indo-Saracenic style. It is the third-largest museum in the world, and with 0.6 million visitors in 2018.

It is particularly rich in archaeological and numismatic collections. It has the richest collections of bronze idols, 500 of them dating to 1000 BC, in Asia. The museum has the largest collection of Roman antiquities outside Europe. Among them, the colossal Museum Theatre is one of the most impressive. .....

At a distance of 4.5 km from Chennai Central Railway Station, Sri Parthasarathy Temple is a Hindu temple located in the Triplicane locality of Chennai. It is one of the popular temples in Tamilnadu, and among the must-visit places during your Chennai Trip.

Sri Parthasarathy Temple is dedicated to Lord Krishna. It was originally built by the Pallavas king Narasimhavarman I in the 6th century CE and was renovated by the Vijayanagara kings around the 15th century. It is one of the oldest temples as well as the famous places to visit in Chennai.

The temple was built in the typical Dravidian architecture style, complete with gopurams and mandapas with intricate carvings and stucco figures. The temple has icons of five forms of Vishnu: Yoga Narasimha, Rama, Gajendra Varadaraja, Ranganatha, and Krishna .....

At a distance of 6.5 Kms from Chennai Central Railway Station (located in Mylapore), the Kapaleeswarar Temple dedicated to Shiva is built in 8th Century by Pallavas. But the current structure is rebuilt by the Vijayanagara rulers in 16th century. The 37 meters tall and grand gopuram is made in the characteristic Dravidian style of architecture. This is one of the top tourist places to visit in Chennai city.

This temple has some beautiful sculptures, among which the bronze idols of 63 Saivaite Saints or the Nayanmars. The Arubathumoovar festival dedicated to the 63 Nayanmars held in March-April every year is a special attraction.

At a distance of 7 Kms from Chennai Central Railway Station (located at the Southern end of Marina Beach, in Mylapore), San Thome Cathedral Basilica is one of Chennai's historic landmarks. This Cathedral was originally built in 1504. It was rebuilt in 1890 with a 180 ft basilica.

This is one of the top tourist places to visit in Chennai city. The church gets its name from St.Thomas, the apostle of Jesus who is believed to have come to India sometime during 52 A.D. It is believed he was killed on St. Thomas Mount just outside the city in 78 AD and his remains interred in Santhome beach where a church was later built. Several years later, another church was built further inland and his mortal remains were transferred here.

At a distance of 7 Kms from Chennai Central Railway Station (located in Vaikuntapuram, less than 1 Kms from local Kodambakkam Railway Station), Valluvar Kottam is a monument built to pay homage to Tamil Poet Saint Thiruvalluvar.

Inaugurated in 1976, the memorial is the form of 101-feet high temple chariot and is the replica of the temple chariot in Thiruvarur. A 33m tall life-size statue of the saint has been installed in the chariot. Another amazing attribute of the auditorium is that it is not supported by a single pillar and stands without any support.

The 133 chapters of his famous work Thirukkural have been depicted in bas-relief in the front hall corridors of the chariot. All the 1330 verses of the poet's epic are depicted on the granite pillars, which surround the auditorium. The auditorium at Valluvar Kottam is said to be the largest in Asia and can accommodate about 4000 people.

At a distance of 10 Kms from Chennai Central Railway Station (located at Kotturpuram near Guindy, less than 1 km from local Kotturpuram Railway Station) the Birla Planetarium is the most modern planetarium in India. It houses a fully computerised projector that depicts the heavens on a hemispherical dome. The Planetarium presents audiovisual programmes on various themes in astronomy.

Adjoining the planetarium is the Periyar Sceince and Technology Museum, which is of interest to students and other science enthusiasts.

Timing : 10 AM to 5 PM, Closed on National Holidays only

At a distance of 10 km from Chennai Central Railway Station, the Vadapalani Murugan Temple is a Hindu temple situated in Vadapalani area of Chennai, Tamil Nadu. Also known as Vadapalani Andavar Temple, it is among the most popular temples in Chennai and also one of the famous places to visit in Chennai.

Vadapalani Andavar Temple is dedicated to Lord Murugan. Built around 125 years ago, this temple is one of the most frequented temples of Chennai. According to the legend, Annaswami Nayakar, an ardent devotee of Lord Murugan was the founder of the temple. During his worship, he experienced divine power entering his body and inspiring him to speak surprising things later found to be true. His utterance went by the name of arulvakku and relieved people in several ways, like curing diseases, getting jobs and marriages, etc.

The presiding deity idol in the sanctum sanctorum of the temple resembles the original .....

At a distance of 3 km from Chennai Central Railway Station, the National Art Gallery is situated inside the Government Museum Complex on Pantheon Road in Egmore, Chennai. This is one of the oldest art galleries in India and also one of the must visit Chennai Tourist Places.

At a distance of 13 Kms from Chennai (located in Besant Nagar), The Elliot's Beach is a well known destination for people who seek relief from the crowded metropolitan life of the Chennai. The Adyar River drains into the sea here.

Popularly known as 'Bessie' among locals, this is an extremely calm and tranquil place. The Beach has become a popular hangout for the young generation. Elliot's Beach is also a favorite haunt of foreigners where they can peacefully take their sun bath.

The Ashtalakshmi Temple near the beach is around 20 years old and has modern style architecture. Velanganni Church is a pilgrim place for the Christians.

Elliot's Beach has good connectivity and transportation options from Chennai.