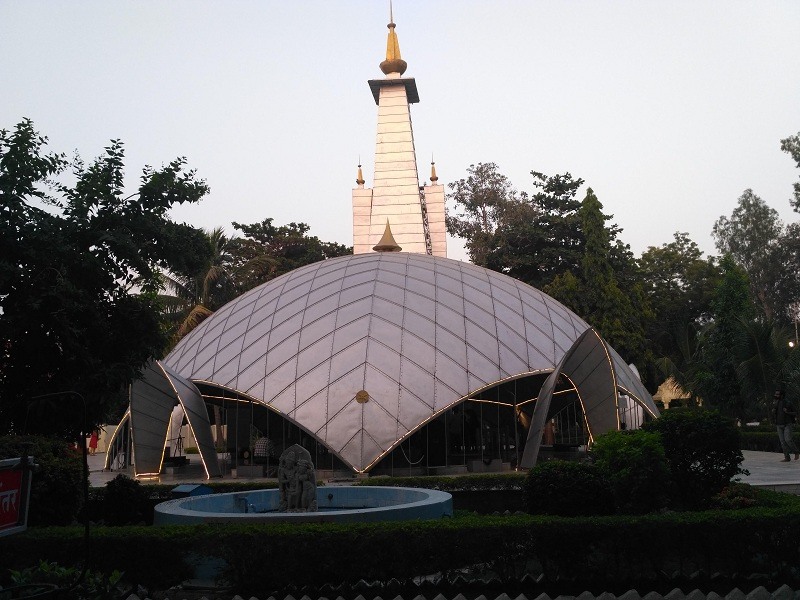 Travel Tips: One need to show some ID proof to visit the temple whereas Foreigners are not allowed to this temple as it is located in the army premises.

At a distance of 5 km from Vadodara Railway Station, EME Temple is prominent temple located in Fatehgunj locality of Vadodara, Gujarat. Maintained by the Indian Army, it is one of its kind in India and among the must visit places in Vadodara.

Also known as Dakshinamurthy Temple, EME Temple is dedicated to Lord Shiva. It was built by the Electrical and Mechanical Engineering (EME) corps of the Indian Army in 1966. The temple was planned, sketched and constructed under the then Christian commandant, Brig A.F. Eugene of the EME School. This uniquely designed temple is covered with aluminum sheets and is the first army temple in the world.

This marvelous modern looking temple is a symbol of secularism, as the kalasha on the top of the dome represents Hinduism, the domes of the temple are built according to Islamic architecture, the entrance signifies Jainism, the tower symbolizes Christianity and the golden top of the tower represents Buddhism. The temple primarily houses a massive idol of Lord Shiva, along with a miniature Lord Ganesh. There is also a silver arch with the holy words 'Om Namah Shivaya' engraved on it. The temple is surrounded by a garden featuring a rich collection of 106 ancient statues from 7th to 12th century. Due to its unique design, the temple attracts huge crowds.